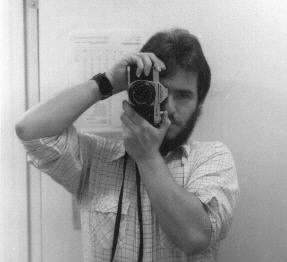 The year is 1981.  I had been a General for one year.  I was also an amateur photographer who wanted to freeze time on paper.  The idea that a shadow freezes permanently, for all time, simply because a plus power lens focuses whatever is in range and leaves a permanent record was fascinating to me.  Like.... like looking in a mirror, and your image freezes there for all time.  Photography is the closest thing we have to time travel.  It's not an electrical reproduction, it's the actual physical object, preserved by natural processes,  the action of Silver, the medium of paper and the action of acetic acids and bromium.

People have been freezing time on paper since 1827.  I was doing it in 1981.  Using both medium format 70mm and 35mm black and white.   Black and White is also timeless.  The only calibrator of time is what may or may not appear in the photograph.  The technology frozen in time.  The dress.  Take dress and technological implements out of the Black and White photo, and you really don't have a reference.  You can't tell when the photo was taken.  An Alex Gardener photo of the Grand Canyon shot in 1875, the same canyon shot by Ansel Adams in 1948, and one shot by myself in 1970 all look alike.  Unless, of course, you are a photographer who can tell wet collodian prints from dry, from a 8x8 wooden view camera image with a spherical lens to a Graflex 4x5 to a Mamya C330..... &c.

Add colour, and for some reason the "timelessness" is removed.  Colours fade on prints faster than Black and White images, and some B&W images never fade!  I once visited a colour Autochrome exhibit at the Smithsonian, "Indian Summer, 1898".  The colour glass transparencies were wonderfully vivid, very, very true colour.  And.... it looked like a bunch of folks got dressed up in 1890's outfits and somebody shot them in Kodachrome!  It looked . . . . fake.  Black and White seems more definite to me, more authentic, more....

On this fine day of June, 1981, I set out to do two things.  Attend my first Amateur Radio Field Day, and to record the event.  The Club that sponsored this location (Ben White Raceway, Lee Road, Orlando Florida) was the Orlando Amateur Radio Club, W4PLB - pretty little blonde.

The location at the time was somewhat remote, close to the intersection of Lee Road and the Orange Blossom Trail, Hwy 441.   The sun was bright.  The temperature was typically warm, high 80s.  Several large screen enclosure tents and a truck camper was set up for the various stations, and several antennas were erected for the event.  Some on towers, some strung between poles.  Some wires sloping down from the towers erected for the event.

What is field day?  It is an event that requires stations to operate "off the grid", that is, not on commercial power.  The idea is Emergency Preparedness.  These events have been sponsored yearly by the American Radio Relay League, since 1938.  Batteries, Generators, portable equipment and antennas are the name of the game.  The time spent doing this: from Saturday around noon till Sunday around 2pm or so, time may vary.

Field Day is actually a contest, with different portable set-ups positioned all over the United States and Possessions, each contacting other eligible stations for points.  The idea of scoring points is to help gauge the effectiveness of your particular station under emergency conditions.  Hams in Florida are particularly interested in Field Day, owing to our Hurricane-prone environment, and the fact that so many of us have gone for weeks without power or telephone, with communications almost entirely being handled by hams on remote power.  Florida has a long legacy of Ham Operation corresponding to weather emergencies.

To be sure, in 1981, Hurricane David was a fairly recent memory.  As was Hurricane Frederick. 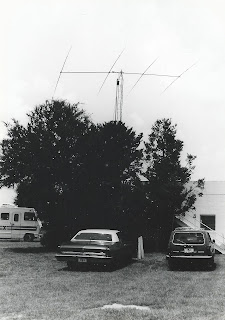 The Ben White Raceway had a Club Building on the premises, but we used only their parking lot.  All food, drinks, and fuel was brought in by the club members and the ops themselves.  What you see in this photo is one of the Winnebagos, a portable crank up tower and, I believe, a monoband 20m yagi. 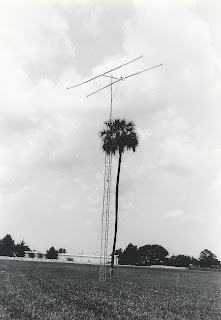 This is a wire beam on a guyed tower.  That palm tree is in the background.  A close look shows a sloper antenna suspended from the tower's top.  That building in the background is part of the stables for the race horses and storage for the sulkies.  This raceway was a horse track.  It no longer exists.  This whole area is now built up. 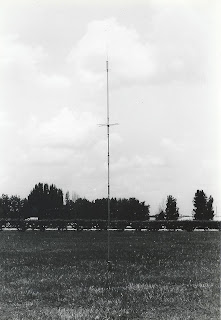 A ground mounted 4-BTV.  Radials are spread out around the area, probably almost to Lee Road, visible behind the hedges. 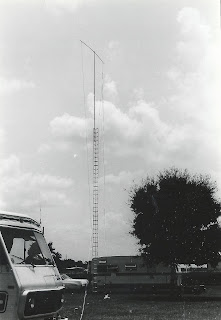 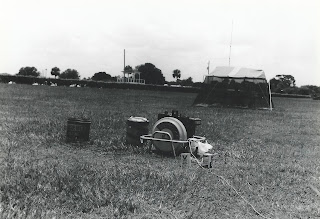 One of the generators.  These are placed a safe distance from the operating tents, as you can see.  Why?  Carbon Monoxide from the exhaust, not to mention the noise.  Some of these generators were not all that loud.  But the place did smell of petrol.  There were no diesel generators. 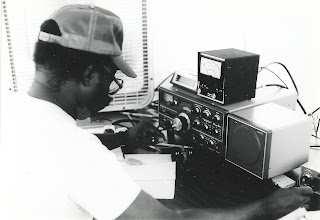 Wow.  Memories.  These rigs were brand new, then.  A Kenwood TS-520, matching speaker, Swan watt meter, an electronic keyer and the good ol' J38.  I do not know the name of the op.  I did not know many of the hams at OARC. 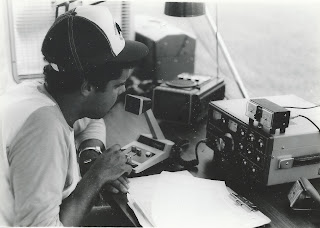 This op worked at Amateur Electronic Supply, Orlando.  I think his name is Pedro, although forgot his last name and call.  I can tell you he was a great fella to work on the air, one of the very few that took my regen receiver building anything LIKE serious (Charlie at AES did, too!) .... and sold me his HW-8 at a super deal.  Now, check out the equipment.  It looks like the TS-520 kinda ruled the tents!  He is using a Turner power mic.  A Swan SWR bridge sits on the Kenwood, and... a wind-up travel alarm to keep time for the log.  Remember paper logs and notes?  This was REAL operating. 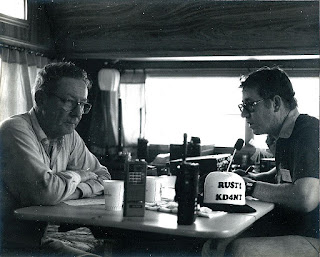 Op and Logger.  I haven't talked to Rusty, KD4NT since the late 1990s.  I forgot who the fella to the left is.  I am sure somebody will embarrass me by reminding me, but you know?  Thirty-six years is a long time.  It's hard in this photo to identify the rig Rusty is using, here.  But one thing I can say, everything here is the latest state of the art as of 1979-80.  This scene is taken inside a pick-up truck camper.  Rusty is doing the talking, his partner is doing the logging.  To me, this is the quintessential Field Day photograph.

This was the one and only Field Day I ever attended.  I did operate from midnight on, for a couple hours, on 40 cw, using a straight key until I was replaced by a fella who came in with, what I think was a HAL code reader/ sender.  It had it's own CRT, that's all I remember.  That was the end of my operating, I guess I was too slow.  Anyway, I'm sure they got a ton more contacts from that operating position.

It was a lot of fun.  It was a long time ago.  I'd almost hesitate to see a Field Day setup these days, I wouldn't know what button to press!  I wouldn't know PSK31 from WD40.   I might guess that's why my station is, itself, locked in time.  :)