Before I start this installment, here are the "instruments" I used for tuning.  I don't have much test equipment at my shack, I share it with my Print Shop, so there's not a lot of room.  Here is what I used to work on the 1011-D: 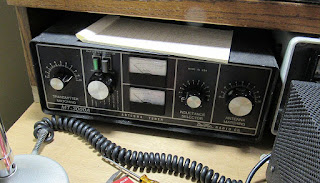 My Antenna Tuner.  Its a Dentron MT3000A, which has a built in dummy load.  That is what I am using to both load into, read the power output, and also tune my 40m vertical down to 10m. 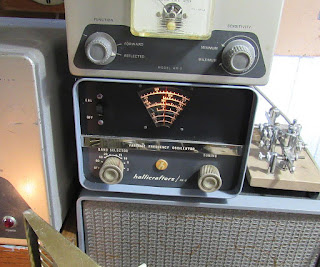 My Hallicrafter HA-5 vfo.  After about half an hour warm up, she's very stable.  I calibrate her against the xtal calibrator on my Drake 2B.  I kept her parked on 28.5 MHz during this whole process. In addition, I used the mA meter on the Siltronix 1011D itself, along with it's S-meter.  Unless the radio is radically unadjusted, normal tune-up uses peak tuned signal at the front end to align the receive (it's only a single conversion superhet, the transmit output tuned circuitry takes care of the other receiver tuned circuits).

Tuning the vfo means sending a known signal into the front end, and tuning the output is a step by step affair following the manual, using the on-board mA meter.  That's really all you need!  A Dummy Load, a way of reading output, which can be done on the rig itself, a way of reading signal input which is also done on the rig itself, and a frequency standard or reference.  I might add that if my FD1011 was working, that would also be a handy tool.  But at this point it's not seeing my vfo output, so that is not being used.
. 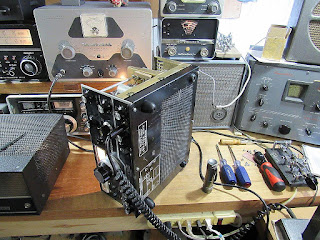 I decided to spend a good part of the afternoon bringing at least one band back to Ten Meters.  There is a dearth of information regarding the relationship between the parallel shunt caps and the vfo calibration cap.  Having mentioned in the prior installment that the 1011 is essentially a Cygnet, and locating the vfo on the Cygnet's downloaded manual, and identifying the parts and values as basically the same, I determined that 10pF is the approximate value needed for 28 MHz.  More or less.

Shown below is the vfo calibration caps, indicated on both the 1011D and the Cygnet manual as being 5pF (I will assume full mesh.)   If the shunt capacity is 10pF, we're talking 15pF total.  The lower the capacity, the greater the ability of the calibration tuners to vary the frequency because the ratio of values. 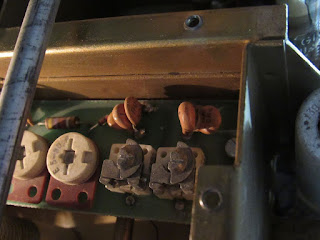 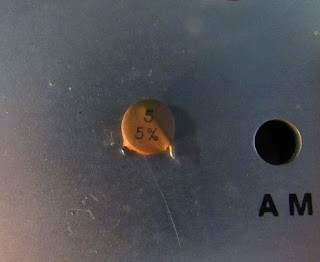 Because of how tightly the caps are soldered together, I cannot tell the values of the three remaining, but having placed a calibrated signal through the receive chain, I was able to easily calibrate the receiver at 28.5 MHz, dead on the nose.

Now, having done this affected the drive tune to the finals.  Now that the 11m side and the 10m side are one full meg distant (as they originally were!)  I found I had to re-tune L201 (mixer output) and L301 (driver plate tune)  Both of these, as well the carrier null, are located on the bottom of the rig via access holes. 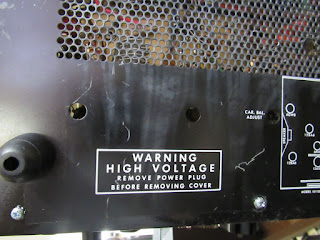 L201 is on the left, L301 is on the right.   These perked the 10m output quite a bit, reading the power output off the watt meter on my dummy load.  However, this was at the expense of the 11m output.  It would appear that I have a choice, either operate 10m or 11m.  Now, when these rigs were built, the whole point was operation on 10m.  It was receive only on 11m.  Which tells me that when (what we call today "Freebanders" today) converted these rigs down to 11m, they had to not only alter the vfo by the addition of caps, but they also had to re-tune the whole transmit train for 11m.  So I am, essentially, reversing the modification.

So as it is right now, the 10m portion appears to be back where it was.  The maximum output in tune position is about 45-50 watts.  In the AM position, I am getting about 30 watts with forward deflection on the output meter, on SSB (I had to re-null the carrier after the re-modification) I am getting in the vicinity of 60 watts on a hard whistle.  I don't have a tone generator, but I can get an idea by sending sound through the mic.  Also, I can get a good idea of carrier suppression and modulation quality via using the Drake 2B as my service receiver.  Maybe I should have shown it as part of my "test" gear.

From what I can hear, the 1011 sounds great on both AM and SSB.  The acid test is when I actually talk to somebody on the air!