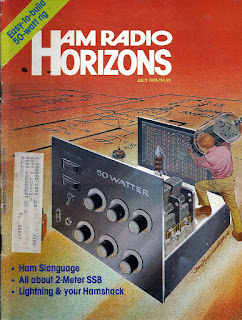 About six months before I took and passed my Novice Amateur Radio Licensing Exam, I became a charter member of what I believe to be the best magazine ever written with the Novice in mind.  It was the brain child of Skip Tenney, then with Ham Radio Report (HR Report).  The other fellow was contributing author James Fisk. There were, of course, more folks involved, HRH was a daughter magazine of HR Report.

Unlike any other Amateur Radio "rag" up to this time, it was the only one entirely devoted to the Beginning Ham, or Ham-to-be.  It was chocked full of articles that showed you how to select your first rig either at a store or on the Ham Fest swap table (or under those tables, in my case!).  There were articles on theory that even I could understand.  How to fix and repair older rigs once you got it home from the Swap Meet.  Bill Orr contributed a masterful series of Wireless History articles and a few projects involving the building of those old breadboard rigs.  There were other radio history articles, adventure stories ("Incident at Terralingua Creek" comes to mind...)  Even articles about how a Ham Radio License can earn college credit and lead the young ham to a lucrative career at several different levels!

This magazine was absolutely void of politics!  Absent were the jaded comments about the ARRL or about Wayne Green or about who most influences the FCC and how they don't represent all hams, ad nauseum.  In fact, both the ARRL, 73 and CQ got their two cents in this magazine at one time or other.

It was this magazine that inspired me to write for the Electronics Hobby Industry.  Not that I was a prolific writer.  My stories always wound up in private radio publications such as "Harmonics", America's oldest ham radio publication in continuous print.  I think it pre-dates QST by a year or so.  My stories also appeared in several ARC newsletters and publications all around the country.  Never made a dime. Made a lot of connections and most importantly, friends.  73 did pick up one article, but just before the issue that carried it was put to bed, the publication folded.  (sigh)

Yes, HRH was a very special run of magazines, and to date, I have them all.

So, what happened to HRH?  Where did it go?   I don't have any specifics, but I think I have a good guess: Jim Fisk passed away suddenly.  That left Skip editing both HRH and HR Report.  I think it also complicated publication contracts with writers.  So, sometime 1981 we charter members were contacted by HR Report informing us that our subscription would be converted to HR Report, who would incorporate HRH articles in it's publications.  That meant one or two stories, maybe three.  At the time, HR Report was very heavy into the new digital programming technologies, and there simply was not enough space.  After a year of HR Report, our subscriptions lapsed, and that was the last connection I had with HRH/ HR Report.

But golly, it was a fun run.  And besides, I was getting involved with writing and corresponding with other authors for tips and help on how to negotiate with publishers.  Mr Trauffer, Mr. Ingram, the then editor of CQ magazine, all via the new media of the Internet, were opening new doors via eMail, weblogs, newsgroups and e-Zines.

My articles were mostly human interest.  My goal was to involve un-involved family members in the hobby of Amateur Radio.  At some point I'll post a couple of my own articles, but for now, I want to share a classic project series originally published in the July 1978 issue of HRH, in the form of installments.  July '78 was the first installment of:  Bill Wildenhein, W8YFB's . . . 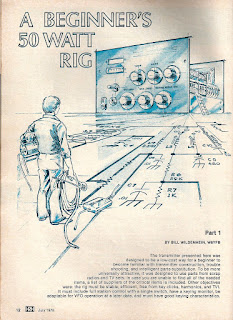 One of the things I appreciated about HRH was it's diverse art work.  I would have loved to been part of their graphics department.  Their cartoons were not highly stylized to the point of corniness. This duo-tone image is a very typical layout, quite cutting edge in 1978!

At the time of this publication, it was still possible to locate junked TV sets.  This new phenomena called the "Flea Market" was gaining momentum, and parts from old table top tube radios could be had for a few bucks.  In 1978, collector focus was on Victrolas and Gramophones.  Vintage Radio had very little traction amongst  collectors then.  Hams were dumping their big SP-600s for less than fifty bucks (my friend Ron, now KA4USN, then WD4NFU, picked up his in trade for a CB walkie talkie!!  It was pristine.)   I remember not being able to sell a well kept HQ-180 for forty-five dollars because I did not have the owner's manual!  Suffice to say, tube-oriented parts and what became known as "Boatanchors" were still out there for folks on the cheap, like me.  This had the effect of keeping Novices like me - in 1978 - pretty well stuck in the '40s and '50s.  Which, frankly, suited me just fine.

But change was in the wind.  We were witnessing the sunset of an era. 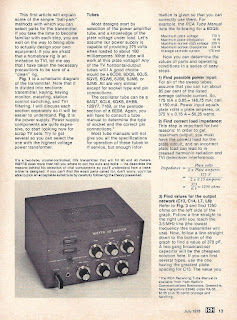 Bill's article was not just another "cook-book" article.  Here, following the HRH prime directive of education and equipping the young ham, he attempts to instruct the reader how to design this transmitter around available tubes/ valves.

Recall that in 1978, military surplus stores were still selling items like JAN (Joint Army Navy) 807s for a quarter, JAN 6L6GYs (the really really huge "S" envelope type) for about the same, 6AG7s went two for a quarter. Unused bakelite and phenolic octal sockets sold at five for a quarter. I bought a new-in-the-box BC453 for twelve dollars!  So the old war surplus market was still alive, but within a few years signs of depleting supplies would start to show.  At the time, a 150 watt B+ power transformer could still be had, new, for less than fifteen dollars.  Broadcast type 365 and 400 pF single, dual and triple ganged variable capacitors abounded. Chassis were still being sold at Lafayette Radio Electronics, and cabinets, new and used, were everywhere if one cared to look.  The world was still smiling on the tube homebrewer.

In this article formulas are given to compute voltage requirements based upon tube selection, and impedances which the final RF amplifier section requires for maximum power transfer based upon tube reference chart specs.  Examples of actual circuits are given, helping the builder perform his or her own calculations. 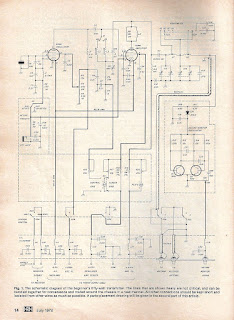 I wish all construction articles were written like this!!  If you click on the photo and look close, you will see dash-lined squares representing circuits built as a unit.  Modular construction!  This rig is built, progressively, one module at a time. Note that I posted these photos such that you can save them and enlarge them. 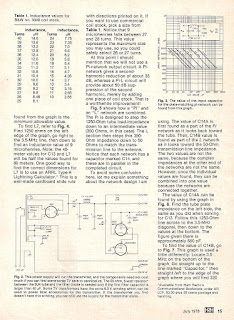 In 1978, very few people had a programmable calculator or personal computer, although all that would change soon.  Rather than be "math heavy", nomographs are used.  Easier to work with, they also just plain look friendlier - especially to new hams!  I prefer formulae because I can do modifications to them as needed but in 1978??  Gimmee a nomograph any day!!  Ken Cornell, in his Low and Medium Frequency Scrap-book, used the same thing, rather than going to the mathematics. 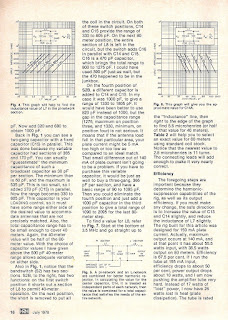 Today I use Excel and a few HTML calculators that I wrote in Javascript back when Sun Microsystems were first introducing it in the 90s.  This was, in turn, adapted from my still older "O-Henry" set of calculator algorithms written for the HP-86 computer in BASIC back in 1988. 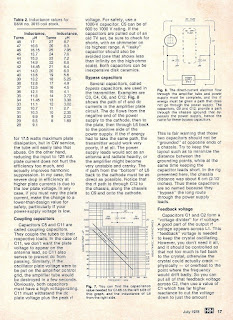 As the builder progresses through this first installment, part 1, the author spends time going over a little theory regarding how the circuits work.  And why bypass caps are used, and how they shunt higher fequencies to ground, and why this minimizes TVI.  Also, why screen dropping resistors are inferior to a regulated screen voltage. 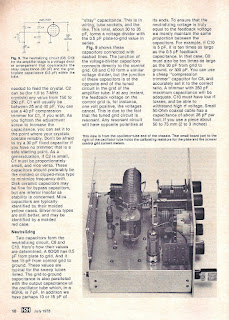 The how's and why's of amplifier neutralization are explained on this page.  Along with a good shot of the transmitter layout, which will be better described in the next installment, part 2, which was featured the following month, as it will be here as well. 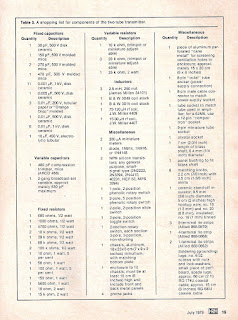 A very well laid out parts list.  You could still order parts from JW Miller back in '78, and as well Allied and Arco!  Barker and Williamson coils could still be ordered like they could in the 1950s!  It was great to be a Novice in 1978!  Especially if you were a builder on a budget! 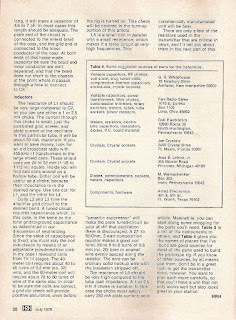 I couldn't help but chuckle when I saw Jan Crystals on this suppliers list. I ordered soooo many xtals from them!  The " Mighty Midget Receiver " project filter xtals came from there.  My grandmother lived right across the street and down the Tamiami trail from their factory on Crystal Drive, Ft. Meyers Florida.  They were Home Town folks!  Somewhere I still have some FT-243 xtals from Jan.  Look over this suppliers list and tell me your memory doesn't take you on a trip!  A couple are, of course, still around.  I think Whitehouse is still around, and I know Fair Radio is.  You might have to come up with a new supplier list, though, if you plan to build this rig!

I'll sign off with Bill's parting word of advice: "Don't be in a great rush to get the transmitter done . . .  you want to plan each move carefully, so that you'll have a unit that not only works will but also looks great in your station."