Vintage QSL Cards: The Printing of the W9AC Card! 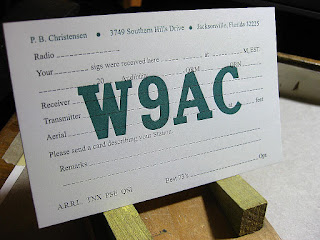 This is a QSL card.  QSL is part of the traditional "Q" signals used in radio telegraphy and telephony for over one hundred years.  It was used aboard the Titanic when MGY Marconi operator Phillips told the Telefunken operator aboard the Frankfurt to clear off: ( "QRT  QRT  -  in QSO Cape Race" - which means, literally "pull your plug, or 'get off the air', I am talking to Cape Race" . . . often interpreted as "shut up".  It did not mean that, but that's another story for another day....

This is a QSL card.  QSL means "Confirmation of Contact", and has been in use for about as long as the Q-signals have been round as a means of confirming, or proving a contact. When a person is contacted, and they request a QSL card . . . perhaps to put up on their wall or QSL board (ham radio shacks used to be literally wall papered with QSL cards!) - or perhaps to send off to a contest bureau for the Worked All States or Worked All Continents awards, which proved you indeed did contact that rare station in the middle of the Indian Ocean.

The data contained on the QSL card usually has standard radio log book information, such as the date and time of contact, the frequency of the contact - or where on the different Amateur Radio Bands did this contact take place, the quality of the signal, the signal strength, the name of the operator sending the QSL card, the call sign of the respondent, almost always printed on the card, and the call of the recipient - hopefully the fella you contacted will send one back to you in the return mail.

In the older cards of the 1920s and 1930s, a brief description of the transmitter, receiver, and aerial (or antenna) was usually given, largely because all was home built.  As time went on, this became less and less a feature as more and more rigs were being purchased as a manufactured product.

The older cards are become quite collectible, and surprisingly, NON-hams even purchase these from eBay, Craigs List, and other places where they turn up for sale.  They have become a category for post card collectors and Philatelists who specialize in these sorts of postal ephemera.

Much after World War Two, and especially much after 1950, QSL cards became a mass produced product, but in the 1920s and 40s, and most of the 40s, they were very frequently printed by the local printer.  More often than not, the local printed used the same press upon which he printed bill heads, stationery, business cards and other "job" work - the Trusty Letterpress.  Often, these were hand-set cards using what the printer had in the shop as far as typemetal and wood fonts.  Others had images made into "cuts", copper or zinc dies produced from photo images (a process that dates back to the 1870s).  Some even carved wood cuts and lino cuts.

Offset printing became much more common during the fifties and sixties, owing to it's very fast production time and relatively simple plate making systems which could produced in-house for multiple colour runs.  Still later, digital printing became increasingly popular.
Today, such conformation is normally made via the internet, but still there are those who prefer 'snail mail' QSL cards.  I among them!  And along with me, several folks that still traffic the airwaves using traditional Amateur Radio equipment, tube-type gear that dates back 50, 60, sometimes even 90 years : Morse Code is experiencing a surge of popularity, especially hand sent code on traditional keys which are still being manufactured!

Paul, who's card is under discussion in this blog entry,  is among this group, and when he found out that I had a letterpress shop and knew a bit about the Old Cards and their designs, he contacted me to print a couple hundred for him.  We went over several 1920s and 30s designs, taking elements from several, and produced a design that is very traditional to, say, 1930. 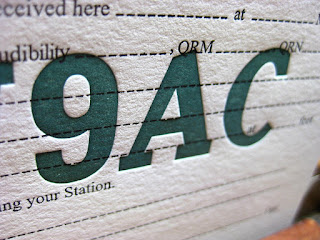 One challenge in the design we chose had to do with the original wooden font used for the call.  We really liked the out-sized serifs and almost 19th-century newspaper headline look.  But . . . the font does not exist anymore!  Many of the American Type Founder's fonts have been digitally reproduced, but not this one!  In fact, it's name, "Foster", has been re-branded!  Fortunately, one of my best resources for this sort of research is my trusty . . . somewhat dissected . . . ATF Specimen Book, circa 1915.  We found a positive match: 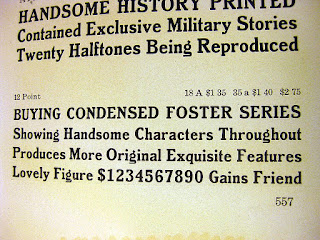 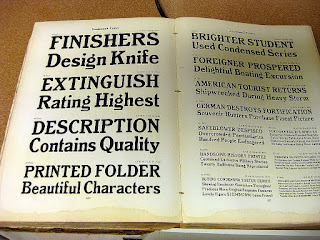 While the complete alphabet was not shown, enough of the letters were found on the four sample pages that I could piece together elements of character structure so as to sort of reverse engineer the whole alphabet.  This was accomplished on my faithful and trust vector IDE: Macromedia FreeHand MX.    What is particular unique looking over these sample paragraphs are the figure '4' and the lower case 'g'.  There was more than enough to cobble together the call "W9AC". 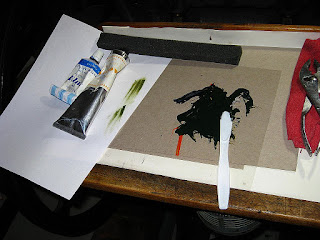 I opted not to use process green, which was my original plan.  Paul wanted a vintage feel.  Now, when these cards were new, the whites were vibrant, the blacks were clear and crisp, the green was deep and fresh.  In time, these things mellow . . . as do we all . . . and so we chose a soft buff card stock, process black, and for the call, I would custom mix the ink.  No charge to Paul, however, normally custom mixing carries a fee.  I do this by eye and by colour wheel.  While I do not use the Pantone System, I do get help in printing ink proportions from a Pantone Swatch book.  As such, we came up with a great green that edged on the border of olive.  Just enough to suggest a vintage feel.

Yes, fellow Letterpress Practitioners: those are Dave's Ink In Tubes.  I love tubed inks, they just plain last longer!  Higher initial cost, but having just tossed out several 5 lb cans of canned inks that I spent good money for owing to having dried out - especially the rubber based, for some reason - in the long run the tubes are cheaper.  Save yourself and your clients some bucks!  That is, of course, unless you have so much business that you go through 5 lb cans regularly. 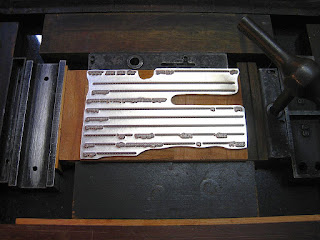 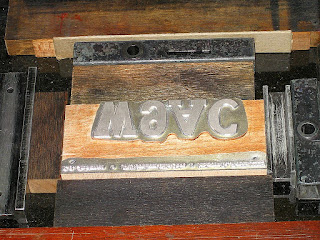 Here are the two dies.  The top photo is the text block, process black.  Font chosen was one made popular by the NY Times back in the 1920s (methinks!) - Times Roman, or better known as "Times New Roman".  It's not new, and was available in foundry metal from ATF for most of the 20th Century.  It is traditional, and from a personal point of view, it's easier to read than Century School Book, another common text font. 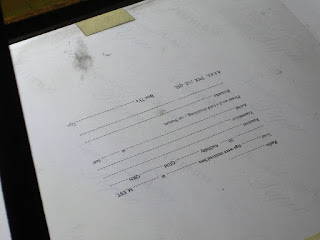 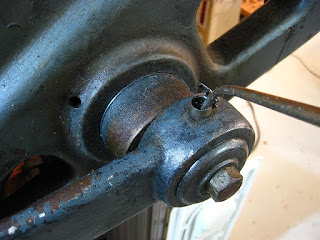 There are about twenty-five such oil ports that must be filled before a day's run.  As old as my press is, it runs smoothe as silk.  First we oil her up, then we apply ink to the ink disc. Then turn on the press to spread the ink.  Then comes the platen packing, then the dies are inserted, the rollers leveled, the platen packing adjusted. Then trial impressions are printed on the transparency to establish and set the cards to be printed. Once all the above is done, then we can get to printing! 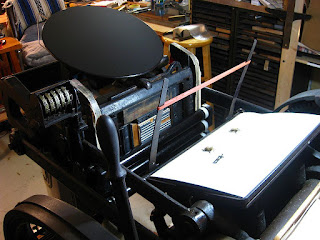 Here she is, all packed, inked, and ready to run!  The stock, of course, has been pre-cut at the shop's  "bindery", which is located in Orange City, the next burg over.

All told, it took about six hours to print both colours.  It took about three hours to re-create the call-letter font, Add this to the week - to  week and a half  delivery time for the dies and paper.  The whole process takes, usually, about three weeks.

I thought I might share the video that I made during the printing of this card.  It pretty much takes you from beginning to end of the process.  From time to time you might catch a few shots of my station, itself pretty vintage in and of itself.  In fact, at the end you might pick up a little code in the background.

That's about it for this installment!  I hope it's been informative and perhaps a bit entertaining.  Probably nowhere is the Letterpress intertwined with Wireless than in the printing of Radio Stationery.  It is part of what we do at the Paper Wren, and if anyone is interested in having their very own genuine 1920s - 30s - 40s QSL cards printed for their Station - not copies, but originals - please contact me at paperwrenpress@gmail.com, or my personal account at wd4nka@aim.com.

Oh, and before I forget: the photos of Paul's card at the top showed the Crane Lettra run.  I made these cards on two types of card stock: on was hard, friendly to fountain pens, the other friendly to ball point, and which leaves that very nice depression, or "deboss" in the paper.  If one is going for the most traditional, the harder stock would be preferable.

Update: I have had several inquiries regarding the printing of Letterpress QSL cards.  I thought I might share what we have arrived at for pricing.

First, we are using two types of paper.  The first is the more authentic light buff hard surface 90 lb card stock.  This paper is fountain pen and typewriter friendly, which would have been used in the 1920s through 1950s, for the reason that fountain pens were the pen type used before the day of the Ball Point. Many hams chose to type, rather than write out their cards, thus the card stock used had to be able to physically fit into the typewriter!  If you fall in this category, this would be the paper we recommend.

The second type is the type you see in the photos in this blog entry: Crane Lettra, 110lb "Pearl".  This paper is what we use for our fine press announcements and business cards.  It is a very velvety, dense stock that leaves that nice indentation, or "deboss" which you see in the photos.  It really leaves a stunning image!  This paper will cause free-flow ink ( fountain pen or calligraphy dip pens) to bleed, however it can handle ball point pens quite nicely, and can even be photo imaged. It may, however, be a tad thick for the trusty Remington or Royal ( typewriters ).  But if you want a stunning card that can ONLY be produced via the ancient Letterpress, this is the stock to get.  It comes in Arctic White (very bright), Pearl (which is an off white, the most commonly used) and Ecru (which is a light amber-honey)  This paper has the distinction of being the same stock Crane sells to the U.S. Bureau of Engraving and Printing - sans silk fibres - for currency.  It is 100% cotton.

Turnaround time averages three weeks.  This is owing to the time it takes to have the printing dies made and the paper shipped in.

Yes, this is a LOT more expensive than your regular process cards which are either offset printed or digitally printed, but I might invite those interested to Google "Letterpress" and check out the prices that post card sized two colour items are normally charged, which is usually twice to four times higher.  I have reduced my normal fees for the Amateur Radio Community for QSL cards and other Radio oriented custom orders.  Letterpress is one of the two most labour intensive - and beautiful - printing methods on the planet.