A Kingdom Not Far Away..... the Stamps of Adanaland and the Perfect State of Flatby.

Over the years I have received packets from the Kingdom of Adanaland, and her sister state, Flatby.  These came courtesy the Popesgrove Philatelic Co., based out of the Kingdom itself.  These packets contained what we of the Stamp Collecting obsession call "Approval Sheets".

There was a time many years ago when various stamp companies, such as Scotts or Harris or Minkus, would send to subscribing collectors stamps, all neatly arranged upon a sheet.  The idea was to select the stamps you needed, and return the approval sheet, along with your payment for those stamps you selected.  Every month a new Approval Sheet would arrive.  Many of these were aimed at new collectors, to provide them with a great way to "seed" their collection.  Some were tailored after a profile you provided, and may send only "Classical", pre-1900 era pieces, or commemoratives, or various definitive issues. 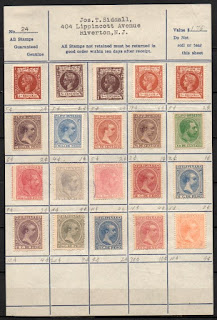 Above is an approval sheet sent to someone who collected Cuba, possibly Spanish Carribean Colonial issues.  I still have one or two that I picked up.  Still, closer to the subject, is another type of Approval Sheet, one that actually tells the story behind the stamp or the place of issue.  These sorts of tidbits of information from around the world which stamp collectors amass is one reason why you probably want a Philatelist on your Trivial Pursuit team. 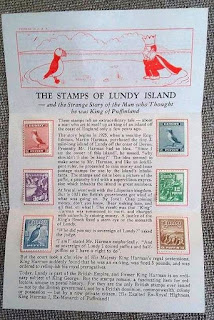 A bit closer to the subject at hand, and a wee bit more fun, are other sorts of Approval Sheets, wherein the specimen above gives excellent example.  The above sheet offered not only a set of one of the most unique stamps ever printed, but also one of the most interesting stories of Philatelic History!  The Lundy Island Puffind Stamps.  Click and enlarge the above image, and read the story for yourself.  These stamps not only passed the mail and were privately cancelled totally under the radar of the Crown, they are now very much sought after by specialist collectors.  Check these stamps out of eBay, sometime.  Some of these illegally printed, not valid for postage stamps fetch over $100.00 apiece!  What made these illegal was that the owner of Lundy Island, which was a three mile wide privately owned island off the coast of Great Britain, actually considered himself the Ruler of Lundy, actually printed stamps and minted coins, Puffins.  That's what got the attention of the Crown.  He actually considered these stamps which he had privately printed, valid for postage, and passed them through the mails accordingly.  That was illegal.  The private minting of coins was, of course, illegal.  The King of Lundy was eventually arrested, fined (five bob), and forced to relinquish his royal prerogatives.
-
Adanaland is different.  Adanaland makes no pretensions of passing it's currency, postal stationery, or anything else through any intercourse beyond that of their sovereign borders.  They print no money because they are happy with, well, the traditional coins of the realm, which works well for them.  They don't mint coins, as Lundy Island did,  for the same reasons. The old coppers and throp'ney bits seem to at least purchase their postage franking fees. But they do celebrate their unusual Sovereign Domain, trapped in time somewhere in the mid 20th century, when phones had dials and families walked along the dikes and parks on Sunday afternoons.  The Kingdom bans foreign products, so only mid century English locomotion methods are seen.  Even their mail boxes are Victorian.
-
Of course, they keep their whereabouts in the Realm to themselves, so nobody really knows where Adanaland and her sister province, the Perfect State of Flatby really are.  All we know about either place comes from what is featured on their postage stamps.  They seem to be a peaceable lot, and value their local products alot because they never seem to reach the outside market.
-
I do have a special connection because I know the owner of the Popesgrove Philatelic Co., situated within the Kindom of Adanaland itself.  Alan.  Alan is also the proprietor of Hedgehog Press.  Well, I say I 'know' him, I really don't.  I am acquainted with him through the mutual avocation of Letterpress Printing.  Alan prints these stamps.  He is, in fact, Adanaland.

-
All of Hedgehog Press' productions, these stamps in particular, are printed on a table top press known as the Adana 8/5.  The name implies that it's maximum print area is eight inches by five inches.  The closest thing we have in the US is the Kelsey Handpress, which is indeed very similar in size, shape, and operation.  And amazing work can be produced from both.

-
So, yesterday I decided to expand my 1938 Scotts "Modern Postage Stamp Album", lovingly dubbed "The Red Book".  My original book which I had since a kid was falling apart.  I located an empty book, the same publication, but in better shape, with a cover and binding that was not falling apart.  My stamp books see a lot of use.  I look at them quite often.  Stamp collectors do that, y'know.
- 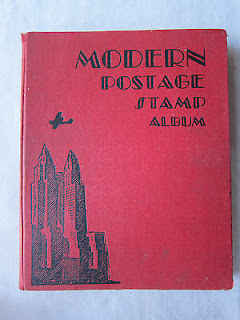 You gotta love that biplane flying up and over the Empire State Building!  And the Art Deco Lettering.  This was the stuff of the New York World's Fair!  This was a Modern Postage Stamp Album!   And, indeed, it is my favourite.   Not the most detailed.... actually, the reason why I am expanding this book is because I have to add pages.  The book was intended for intermediate world-wide collectors, and so many of the full sets of issues I have need added pages.
-
I copied the border design used for the book's pages, and printed them on an off-white quality stock, right from my home ink jet printer.  The pages actually look like they belong in the original book!  I will be "tipping" these pages in, or gluing them in place, "piggy backing" the following page at the inside edge with a 1/8th wide bead of acid free glue. 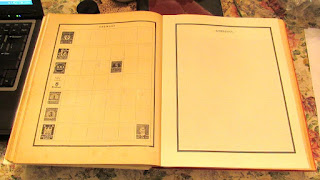 In this photo, the added expansion page is on the right.  While the stamp book is copyrighted 1938, I decided to take stamps up to the closing of World War 2, or 1945.  Except . . . .
-
. . . I decided to add the Kingdom of Adanaland and the Perfect State of Flatby to this album.  That is, only if the added pages do not jeopardize the spine and binding of the stamp book itself.  If it does, I will create a separate, stand alone album.  Privately made Adanaland Albums already exist, btw.  Adanaland and Flatby stamps are not only well known, they have been the subject of Philatelic lectures at exhibitions and Philatelic events.  I think this is part of what is so amazing and attractive about these stamps.  There is a genre of art that comes close to how  these stamps may be defined, called "Artiststamps", which are somewhat different, although functionally the same.  Artistamps tend to be very individually expressive, like a painter's canvas and media.  They do not generally claim to represent a populace, real or imagined.  They tend instead to reflect the artist, or to promote a cause.  The Adanaland stamps reflect a Kingdom, which I guess could be seen as a reflection of the creator, Hedgehog Press.  Artist stamps, however, do not tend to adopt a style adapted from known and classic postal designs.  Adanaland and Lundy Island stamps have far more in common in this regard.

-
I scanned a few of the finished pages of from my Adanaland/ Flatby collections.  I have also contacted Popesgrove Philatelic Co., in the Kingdom of Adanaland, for fills of the issues I have missed.  I only wish I could go there to personally pick them up.  That would be a fun trip. (sigh...) 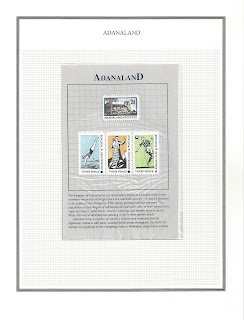 All of these images can be enlarged. Just click on them.  Then, for windows viewers, you should be able to right click the image, and select "view image", or something like that.  For XP users, that is what you do, anyway.  This permits and enlargement of the image.
-
The approval sheet above reads: " The Kingdom of Adanaland is an independent fragment of England which has somehow remained unchanged since the mid-20th century - it may be glimpsed in the pages of old catalogues of the Adana printing machine company.  The population consists largely of self-employed tradesmen who, in their leisure hours, enjoy tea dances, whist drives, masonic meetings and healthy outdoor sports.  Many also run small letterpress printing works in their garden sheds.
-
"Adanaland has a number of overseas colonies and maintains friendly diplomatic relations with other oneirophilatilic states throughout the world.  Its stamps are produced at the Hedgehog Press in Wivenhoe, using Adana presses."
-
I may add that the Adana Presses are table top hand presses.  Not sophisticated C&P Craftsmen or Heidelberg Windmills or automatic Kluges.  No, just simple hand presses.  Speaking of which . . . 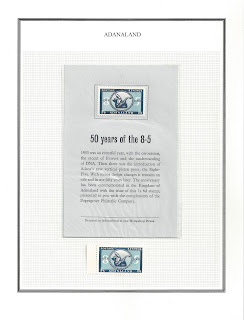 The Adana 8/5 commemorative itself!  And what better place to celebrate a half century of these amazing printing machines than from the Kingdom of Adanaland!  Show above is the approval sheet, and a "gutter" ended single.  Of course, all of these stamps have never been used.  There are no cancellations, and they all have their original gum.  That is to say, those stamps printed after Alan procured a gumming machine. 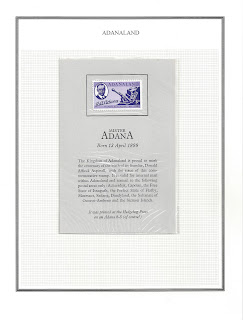 Here he is, the developer of the Adana Press, Mr. Donald Affleck Aspinall, or "D.A. Adana".  This stamp is a dead ringer for a photogravure!  But no, it was printed on an Adana 8/5 handpress!  Alan, how did you do this?  You must have used four different tertiary shades of the same purple colour, and ran this through the press four times!  Perfect registration! 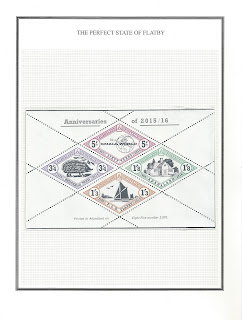 I saved the best for last.  This is best described as a souvenir sheet.  This grouping is technically called a sheet.  It might be called a block of four, but since there is no plate number, it cannot be called a "plate block".  I call this the most breath taking bit of postal ephemera that I have in my entire collection, both regular postal issues and cinderellas.  The design appears influenced by both the German, British and the French colonial issues.  German, because of the border and design frame.  French because of the two colour pallet, especially with the central image being key-black.  And British . . .  because I can read the words.
-
From time to time we will revisit these amazing stamps of the Kingdom of Adanaland, the Perfect State of Flatby, and their extended proprietorships, protectriates, and territories.
-

Thank you for joining us here at "All Things Wireless & Letterpress".  We hope you enjoy the unique variety of subjects, all of which relates to either Letterpress printing, or Wireless, and where the two find their mix.
-
-gary.