I've always had my eye on these products by Yaesu.  As a Novice back in the 1970s, I just could not afford them.  As a General, it was all I could do to take out a loan and purchase a Kenwood TS-520SE, which was a gorgeous rig, very dependable, and just like this Yaesu: it was the economy strip-down model aimed at us yokels who couldn't afford the really nice stuff.

But you know?  I wouldn't have had it any other way.  As  novice, I was forced to build.  And build I did.  I made my own transmitters from a chunk of wood - later aluminium, a couple tubes, and a lot of wire and visits to the Military Surplus store in town.  I made my own primitive receivers, later designing a simple supherhet which I called a Regenerodyne.  If you google "Regenerodyne", you will now find the nomenclature to be fairly common and widespread. I wrote a program called "TubePad" to help me build, and later share what I was building on this new thing called an "Internet".  Thus, having to build brought me to where I am today.  Still broke, but having lots of great memories. From building, I got into restoring old radios, and a lot of great rigs have crossed my bench.  Classics.

And now, I have another classic.

So, sit back, pour up some coffee, and enjoy the Show and Tell as I clean up my new rig! 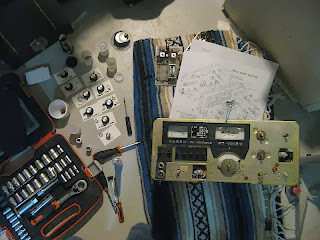 t
When I received the radio, it had been stored in a garage for a number of years.  A Florida garage. This spells humidity and heat.  Perfect ingredients for Oxidation of metal.  When the radio got home, her filaments either would not light, or lit for brief seconds and go out again. Her receiver had trouble finding a clear connection somewhere on her audio control for sound to get through to the speaker.  The band switch was very touch and go.  Nothing was making a solid connection.  No idle current to the finals when I could get the filaments to light on the finals.  My options were pretty obvious: do the deed.  Tear her down and give her a good going over with the radio restorer's best friend: DeOxit.

This is not a commercial for DeOxit.  But it might be (grin).  DeOxit is a lubricating and penetrating oxidation inhibitor.  I get in a squeeze bottle, capped with a hypodermic needle-like cap.  It permits me to apply this stuff in the hardest to get to places.  It not only dissolves the oxidation, it also applies a conductive and protective coating which prevents, or at least inhibits future oxidation.  Oxidation is simply a molecular change in a metal that creates a less-than-conductive electronic environment. It makes a conductive surface, like, say, copper - less so.  If this oxidation forms a bridge between two connections that are meant to be isolated from each other, it is a "semi-conductor short".  Sometimes the crystals formed by such oxidation take on properties of a semiconductor diode, capable of detecting wireless signals.  They reduce current and introduce gobbs of noise.
DeOxit also has "DeOxit Gold", which is the same, only on steroids.  I used both DeOxit and DeOxit Gold.  This stuff is expensive, but I have managed to keep this little bottle for over twenty years now, so it lasts a long, long time. 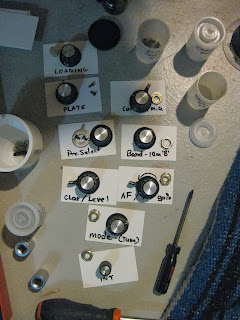 Taking apart a "modern" transceiver can be a challenge just to keep track of all the screws, switches, buttons and knobs that have to be removed.  I kept track on the print shop floor using labels and old film canisters which were not only marked, but also showed the positions of the knobs when I removed them from the front panel. 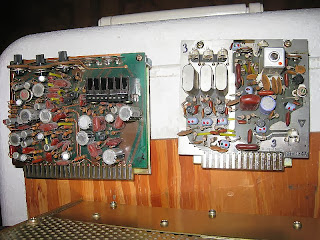 The beauty of the FT-101 series of radios is their modular construction.  This is what made what normally takes days, even weeks - take only one day.  Twelve hours, to be exact.  I gave a liberal dose of DeOxit to both the copper traces on the slides, and the receiving slots. 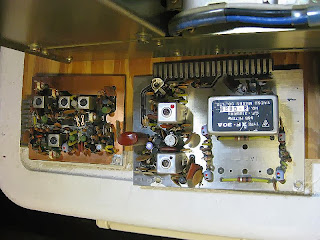 There are a number of these plug in modules, I think something like six or seven.  You have to be careful when inserting them back into these slotted receptacles, because they are not keyed: it is possible to place them into either the wrong socket, or backward.  I numbered each one and drew a direction arrow on them.  The  larger module in this photo indicates by that obvious space that I need to find a CW filter.  I think Yaesu's CW filter was along the order of 600 Hz. 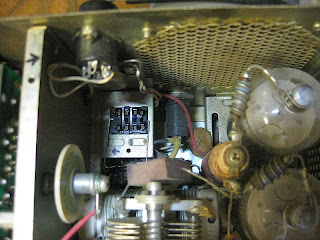 This is the view within the "cage" where the finals reside.  These tubes have around 6-700v. coming off their "top hats".  A lot of radio frequency energy (RF) circulates around this area, which is why a conductive shield cage is placed around this part of the transmit portion of this radio.  It serves both as a physical safety against shock hazard, and keeps stray RF energy down to a dull roar, so it doesn't go leaking out and into your Hi-Fi (my what?) - the neighbours TV set, or your computer's sound card.

You can see the socket which the changeover relay plugs into.  I removed it to clean the pins and socket. 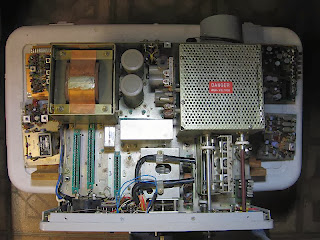 Here's a 'bird's-eye' of the FT-101 with four of the modules removed.  This was quite a revolutionary design in transmitters and receivers back in the 1970s.  Yaesu used actual computer slot receptacles as they were known thirty and forty years ago.  A tip for you enterprising DIYers: make sure you photograph what you do, and mark those things you remove so you not only know where things go back, but in what position or direction! 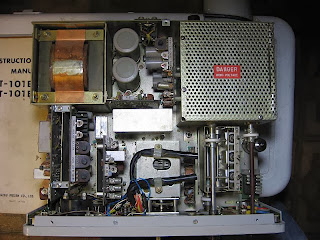 Here she is with the modules re-inserted.  Just as a reference, I will be doing the equivalent of what I am doing here on a Drake TR-3.  The TR-3 will probably take about a week. Not that I mind, it's the usual amount of time.  In all fairness, the TR-3 is about ten years older, and will require re-capping.  The FT-101 shown here can go a few years before I have to do that.  Notice those electrolytics at the center top of the rig?  Those are the newer type low profile filter caps.  Even though they are 34 years old come 2014, they appear to be holding and discharging just fine!  If they were the older "Atom" type electrolytics, it might have been a different story! 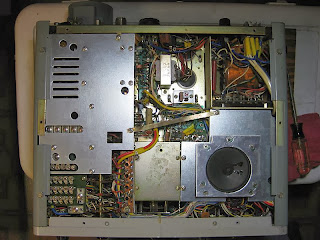 Close inspection of the bottom wiring, and the hard-wiring in the "cage" showed no obvious signs of over-heating, shorts, opens or bypass issues.  Usually, I'll look closely at any resistor in series or parallel with a capacitor.  They usually tell the story, both on the resistor itself, and it's associated capacitor.  While, to be absolutely sure, one must lift any cap and resistor from ground and take measurements, I felt no real need to go that far.  This rig has common storage issues, but no cold solder or heat related issues, and almost all the caps are mica.  Ceramic hi-volt caps usually have a long shelf life, too.  Paper, molded and electrolytics are the main source of old-age issues.

Thus, observing no further issues, I just blew out the dust, slid the cabinet back on and screwed on the bottom plate. 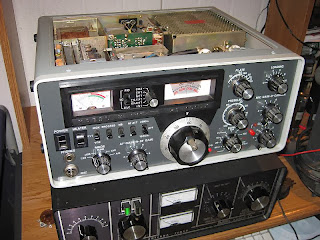 The last thing I did was to re-set the bias to read 50mA idle current.  I did not feel the need to neutralize the finals.  I think sometimes we dig larger holes than we need to when we get into these rigs - something that restoring radios have in common with restoring old printing presses. Resisting the urge to take everything apart...because you can.

I might add that I did replace the plastic transparent protective cover.  That was pretty involved.  I had to use two sheets of medium-thick transparency stock, the type used to photocopy transparencies.  I used two because I did not have one that was wide enough to cover the entire front in a single piece. They meet at the middle of the front panel.  The escutcheon and vernier dial take up most of this area on the front panel, so the seam isn't noticeable at all!  I cut the holes with an Exacto knife.  The escutcheon and dial knob screws are holding the new Mylar transparency frontspiece in place very nicely!  Also, if you look at the power and heater switches, you might notice that I put a black border around each to cover some pretty bad scratches where larger areas of paint had been removed.  This was done with black electricians tape.  The Mylar transparency cover goes a long way hiding the fact that it's actually plastic electricians tape, and not paint!

Here's a close-up of the switches and their new 'borders' under the Mylar transparency.  Oh, I also touched up the scratches on the black part of the escutcheon, too.  Those marks you see in the photo are more of an anomaly of my digital camera, not actually something on the chrome part of the escutcheon. 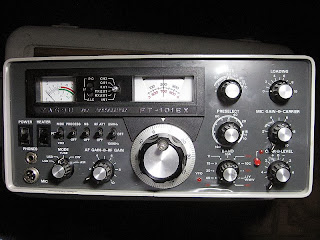 Here she is.  Isn't she pretty?  That reflection on the bottom of the front panel is not a buckle in the mylar, it's actually some other random reflection.  The new plastic cover is perfectly placed. 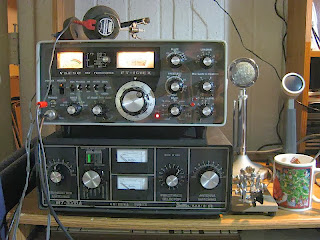 Here is the FT-101EX installed in it's new operating position in the Print Shop at Paper Wren Press.  She sets upon a Dentron MT 3000A antenna tuner.  To the right is my Champion Bug, D-104 mic, Sure-444 mic, and trusty cup o' Joe.  My military head-sets from the 1950s lie atop the rig.  She runs at 100 watts on her original finals and driver.  She will peak at 150 watts on Sideband.  I have as yet to check out AM on here, but she'll probably do about fifty watts or so on that mode. 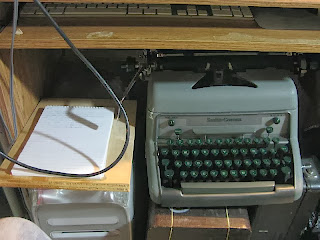 Here are my two major code-copying tools.  A pad of paper, a good pen, and my awesome 1955 Office Smith & Corona!  The typewriter serves as a "mill" for what is called "mill copy", an audio form of "touch typing".  I am trying to build my code speed back to my former 35 wpm. 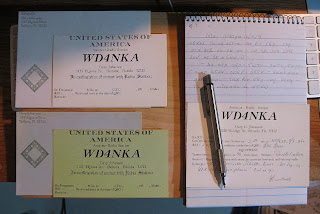 While moving things around to make room for the FT-101, I came across a batch of my old QSL cards that I used in my vintage Boat Anchor days back in the 1990s.  These are all letterpress printed from one of the largest iron Gordon-style platen handpresses made in America, the Kelsey 9x13.  These will be reprinted soon.  If you, dear reader, might like some of this sort of vintage letterpress printed QSL stationery to grace your vintage station, contact Paper Wren Press at gary@paperwrenpress.com, or wd4nka@aim.com 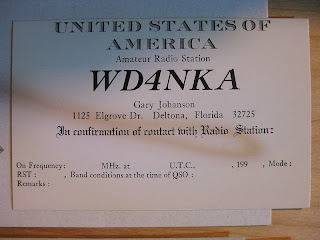 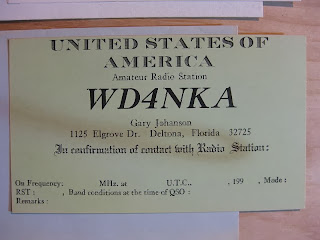 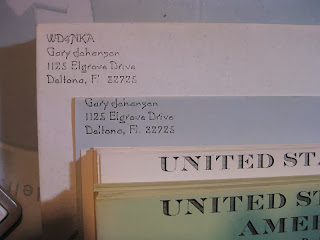 A few close-ups of both the white and green cards and their respective envelopes.  White was for domestic contacts, the green was for foreign contacts.

And this, of course, is the Letterpress Connection.  So far, it's been just been QSL cards, but there are other connections, which we will explore.

That's it for now gang!  And a Great and Merry Christmas to you all!