Certificates for the Novice Rig Round-Up 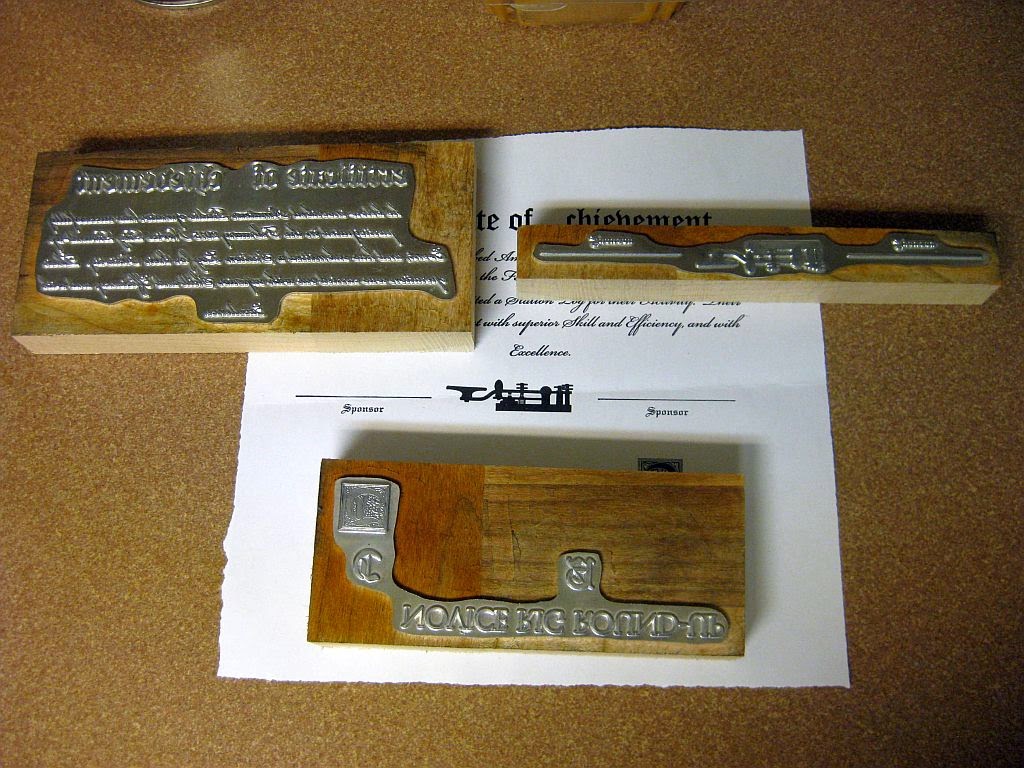 After a couple weeks of designing, I sent the vector files up to Owosso Graphics for plating.  They arrived approximately five days later.  These are metal dies backed by cherry-wood.  Two dies are black, one is red.  The two black dies are at the top, the bottom being the red die, which will print the title and ornamented capital. 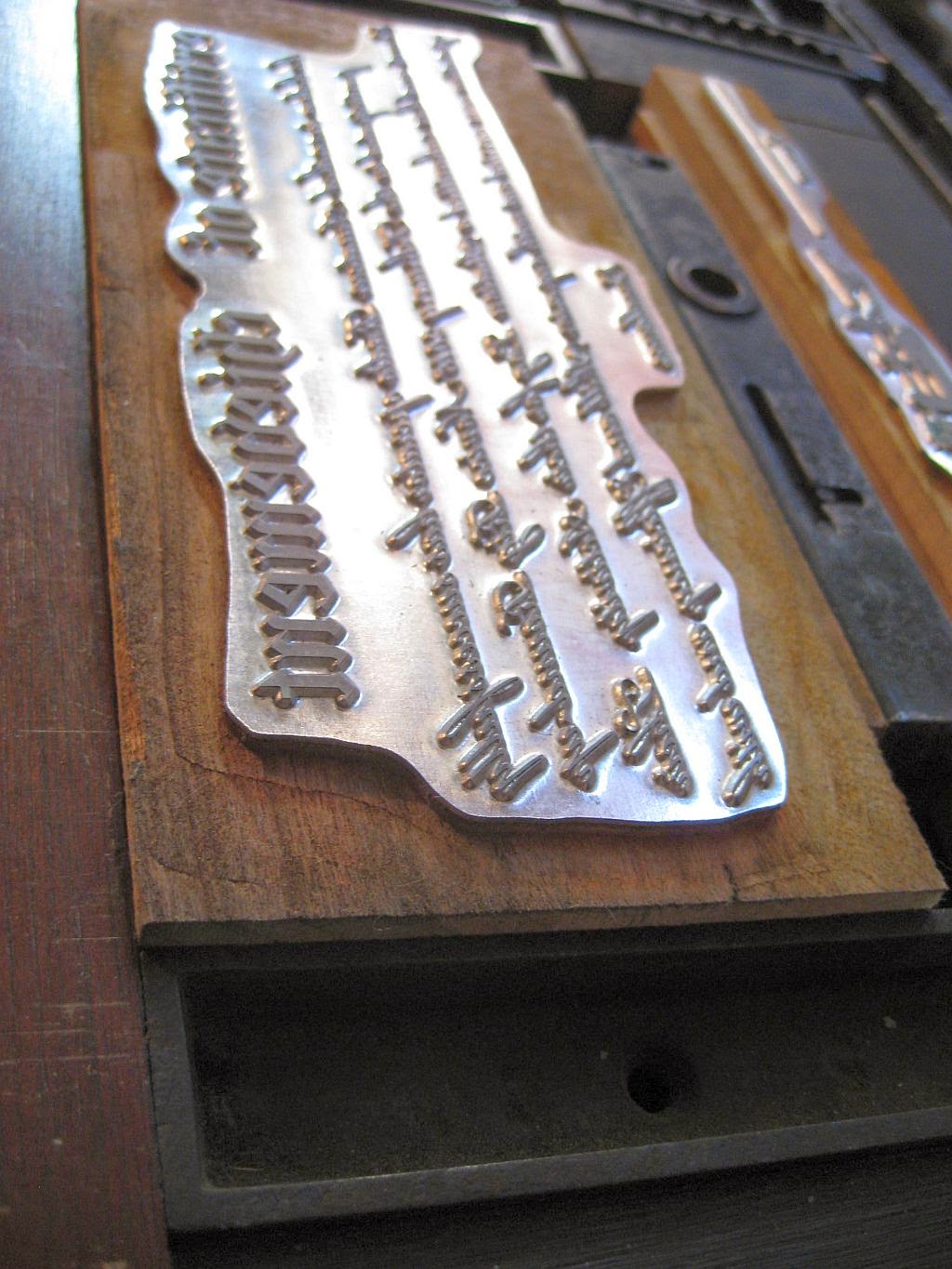 My initial idea was to run the two black dies together, but each die has minute differences which causes a very difficult leveling challenge.  After taking a number of impressions, I decided to run each die separately.  While this adds to the run-time, and almost doubles the number of impressions per certificate, it was the best way to keep a good balance and even ink distribution. 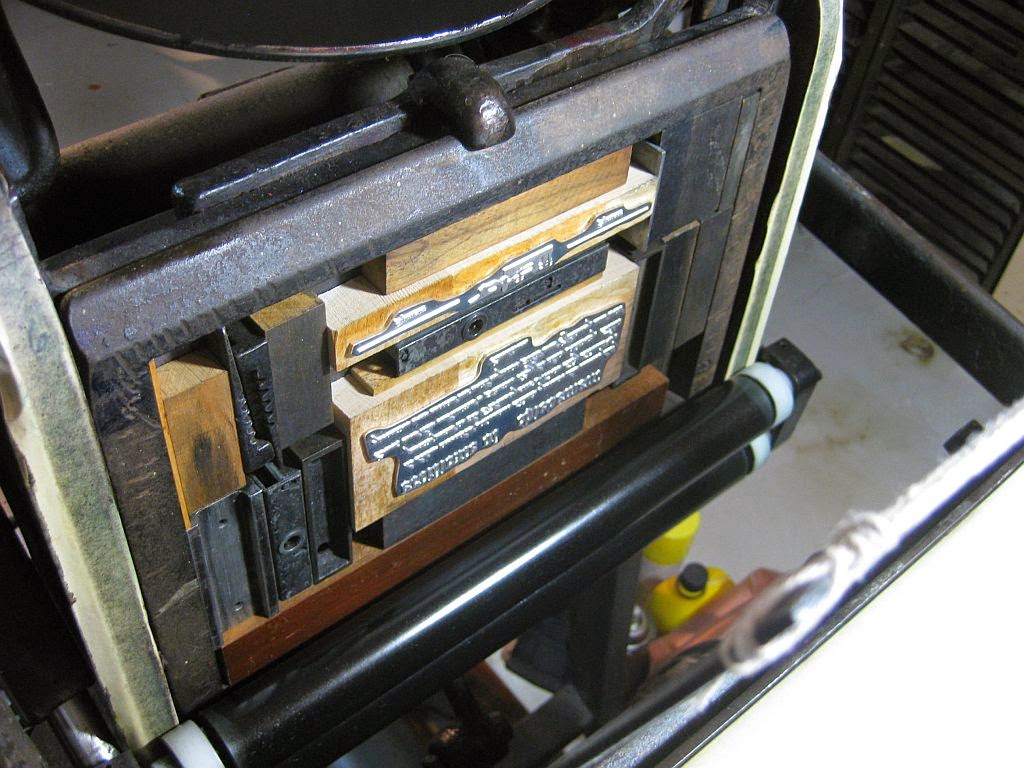 This is a shot of the dies, locked in the chase and mounted on the type bed.  Note the two quoins on the left side of the chase.  This was another challenge: each die must be securely held in place, but these dies were two different sizes, so each one became a separate lock-up in a single chase.  Do-able, but time consuming, to be sure.  But after all was said and done, I removed that top die you see there, and began the printing with the bottom "text" die. 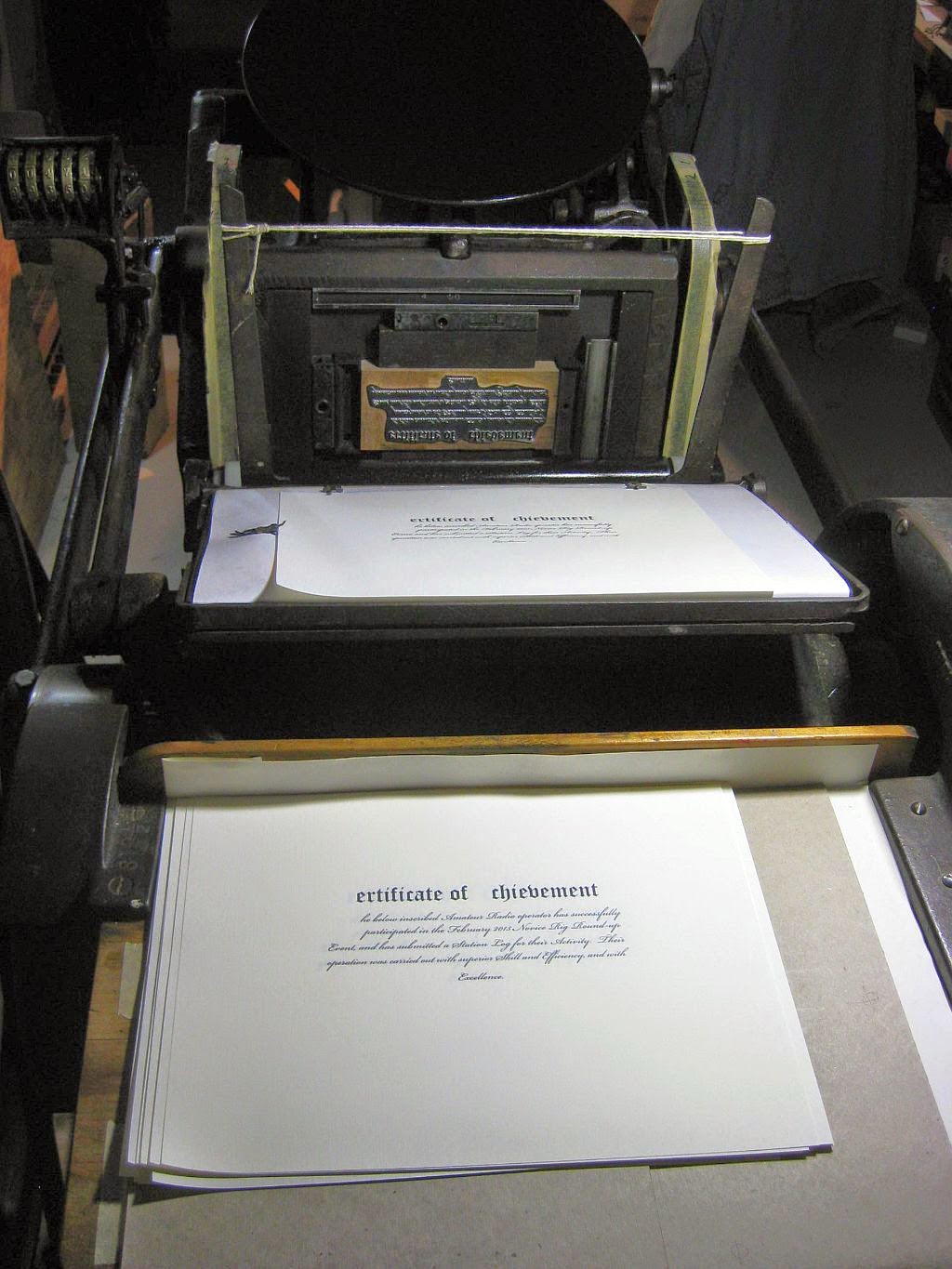 The paper that I used was text weight Neenah Classic Laid, Ivory.  I ran a fairly heavy impression to ensure a dense layer of black ink, yet not so as to cause "shouldering", where the ink begins to collect along the edges of the image line or letter edges.  In fact, I inked the press lighter than I thought I would need to. 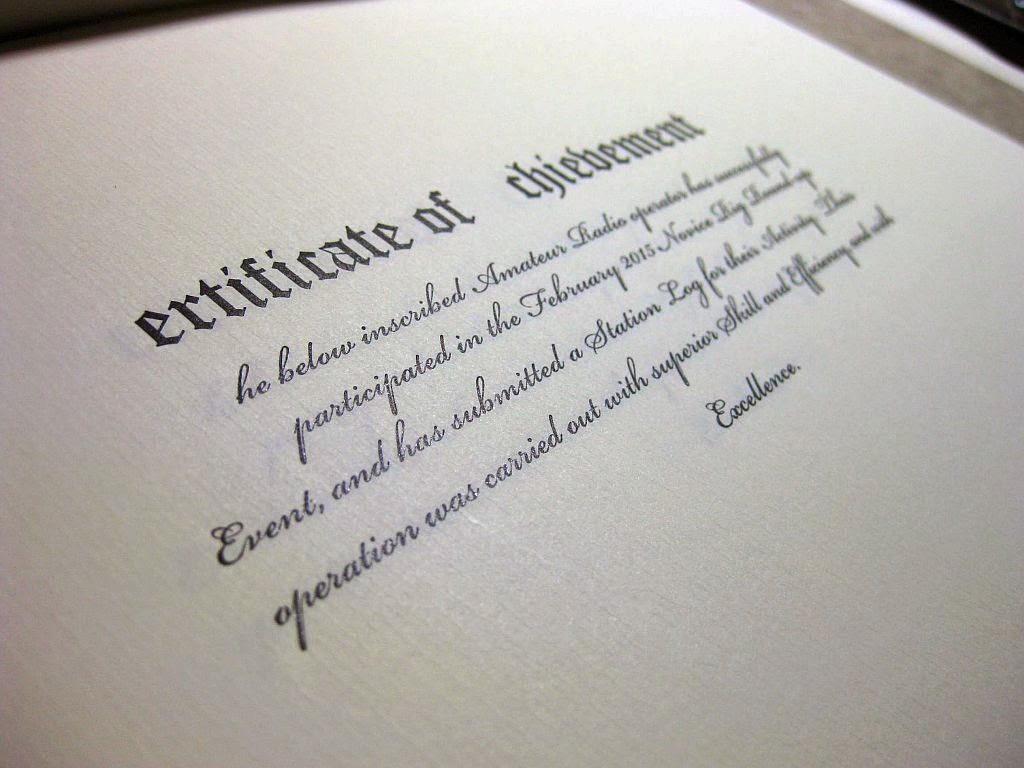 Here is a close-up of the first black impression.  Space is left for the red die to do it's magic.  Letters are nicely debossed, yet not "punched".  I run my impressions taking my ques from the 18th century books in my collection.  The Old Masters actually ran their presses hard enough so as to leave a slight emboss on the reverse side of the page.  Later, in the 19th Century, with more highly mechanised presses which had greater control over the print surface, harder papers were introduced, and the die or type forme was set to just make contact with the paper to transfer ink.  Very little or no deboss was registered on the paper.  This is known as a "kiss" impression. 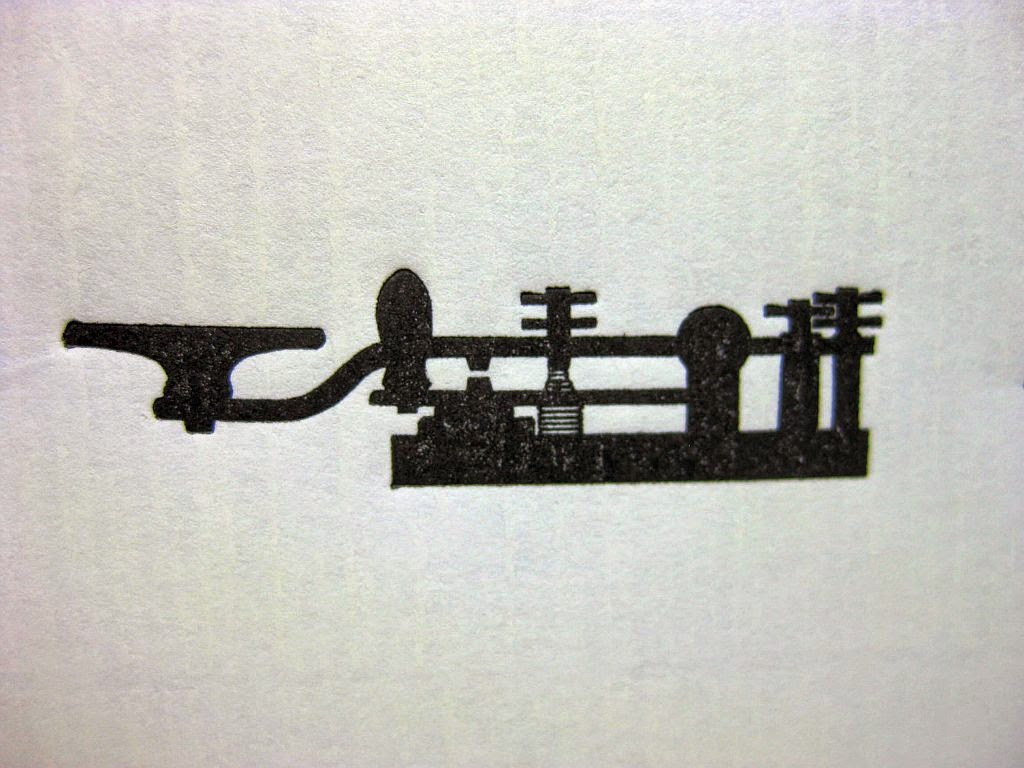 The bottom of the certificate sports a silhouette of a telegraph key between the two lines where the sponsors sign.  This has a bit of a back-story behind it.  It's actually one of my own keys.  I had the hardest time finding clip art suitable for this certificate.  They were either too basic or too involved.  My go-to Dover books had absolutely nothing in their radio and communications clip art, and on line the closest I could find was marginally acceptable, and would have cost me about twenty bucks to download!  Thus, taking matters into my own hands . . . and being a former commercial artist myself . . . I simply propped my J-38 on a ledge, put a sixty watt lamp behind it, and shot a photo with my digital camera.  Then I printed it out on bond paper in black and white, having manipulated saturation, contrast and gamma to produce as close an image as I wanted.  I then traced the image onto a sheet of Bristol Board, and inked her in with India.  Then, I vectorized the result, which was a very nice silhouette, showing just enough detail on the tensioner spring to make it interesting, but not so much as to take away from the high contrast simplicity.  This was then added to the design. 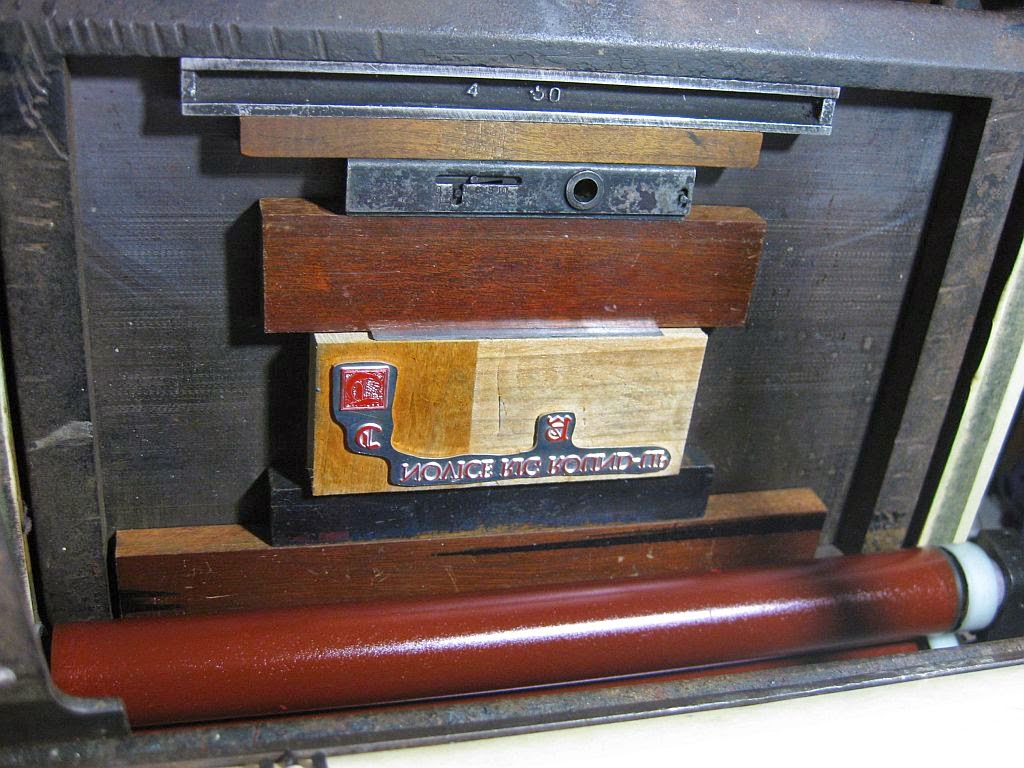 After the upper and lower black die impressions were made, I locked up the red die and changed inks on the press. Normally I have "furniture" surrounding all sides of a die or forme (a forme is a composition of metal type, assembled and locked into the chase for printing), and for a forme, it is absolutely necessary to do so, but in this case, being a wood mounted die, I did not need to.  It is rare to be sure, but this time I decided to go with simply top and bottom bracing.  And it held well, no buckling.  You might notice that the wood backing is actually glued from two separate pieces of cherry wood. 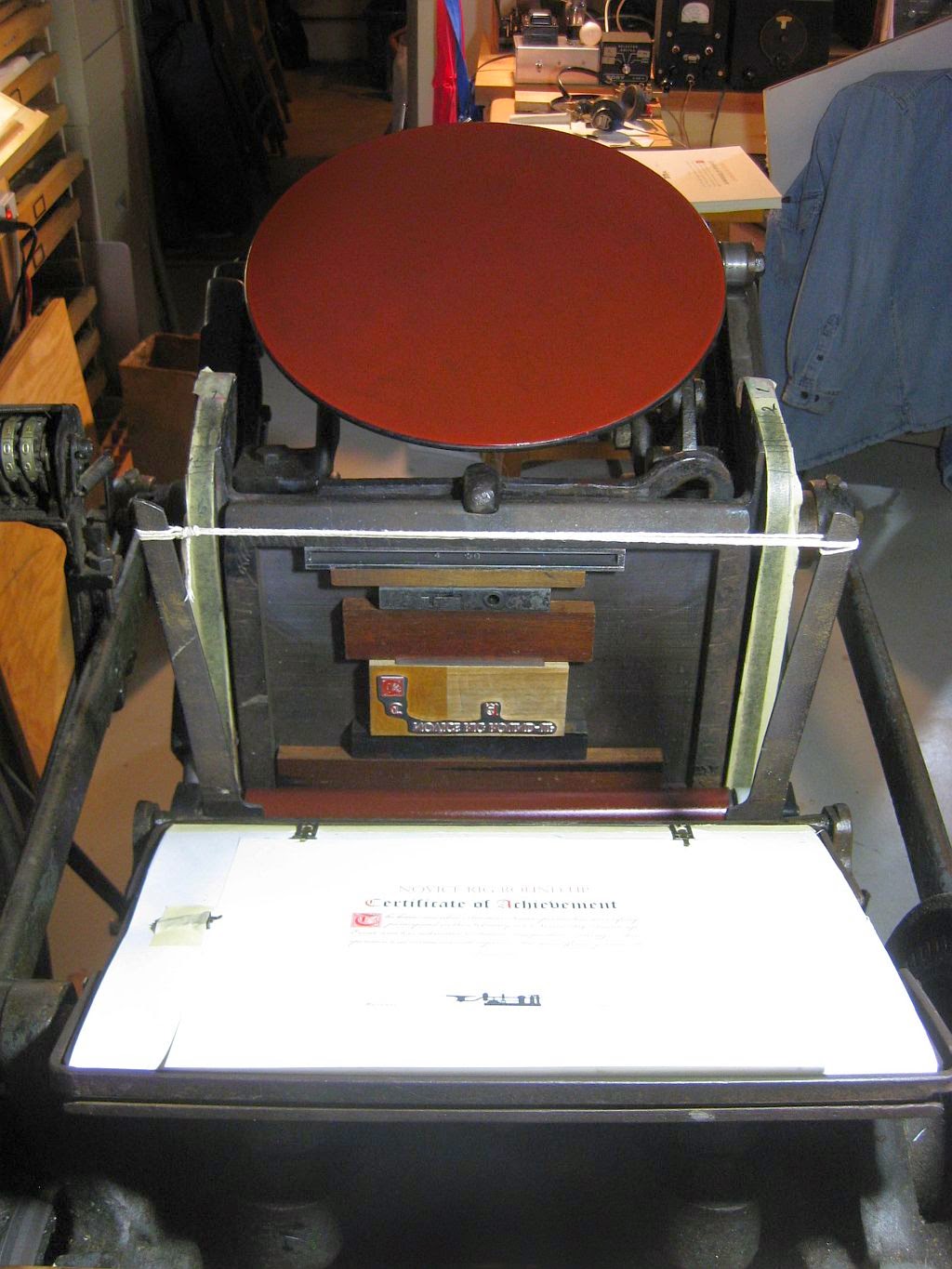 Here is a shot of the red die impression from off my 8x12 New Series Chandler & Price "Platen Jobber" press.  These types of presses were utilized for QSL cards and all sorts of stationery, forms, menus, business cards, you name it.  These were the mainstay routine job printing presses for over one hundred years.  The mechanics of this press' design goes back to 1869, but is related to the Ruggles Card Press of 1820, the world's first "mechanised" printing press.  The printing itself, in it's essence, remains unchanged from the middle 1400s, only the platen meets the type in a vertical, rather than a horizontal position.  Oh, and Gutenberg didn't use a half horse-power motor, either. 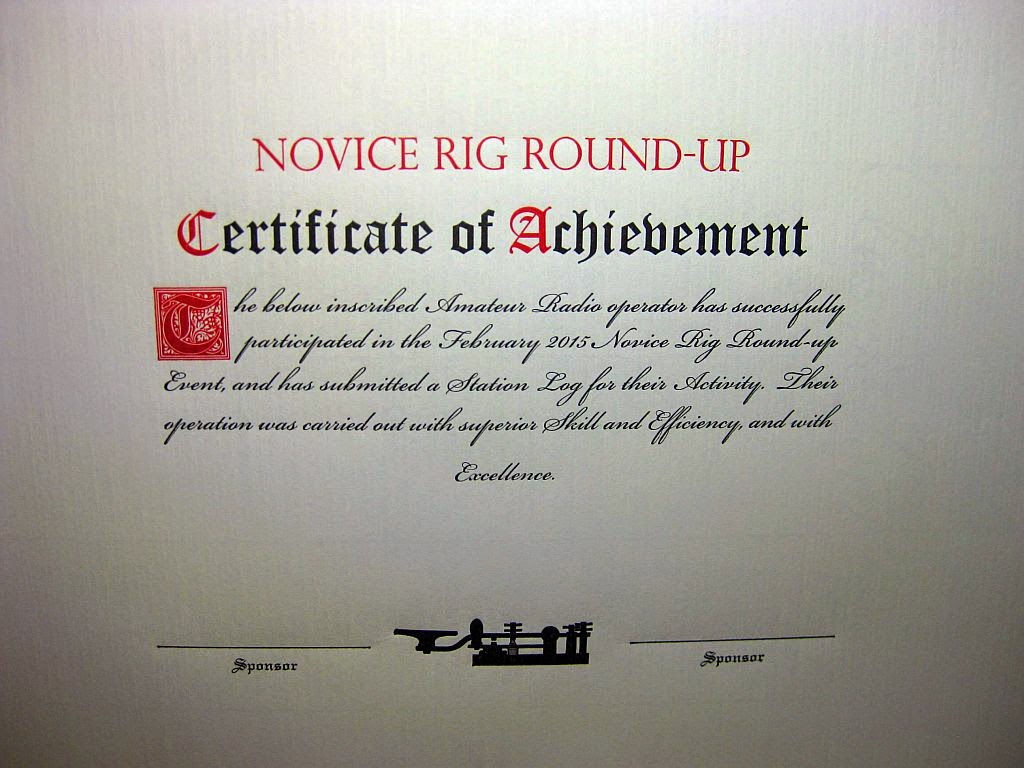 And here she is!  The Novice Rig Round-Up Certificate of Achievement.  "Achievement", in that the operator actually participated in this event!  But also, scores for contacting certain types of Novice Stations were tallied, and will be included, on the Certificates.  The image size is 5 x 7 inches, the paper uncut is 8.5 x 11 inches.  It will probably be trimmed down to 7". 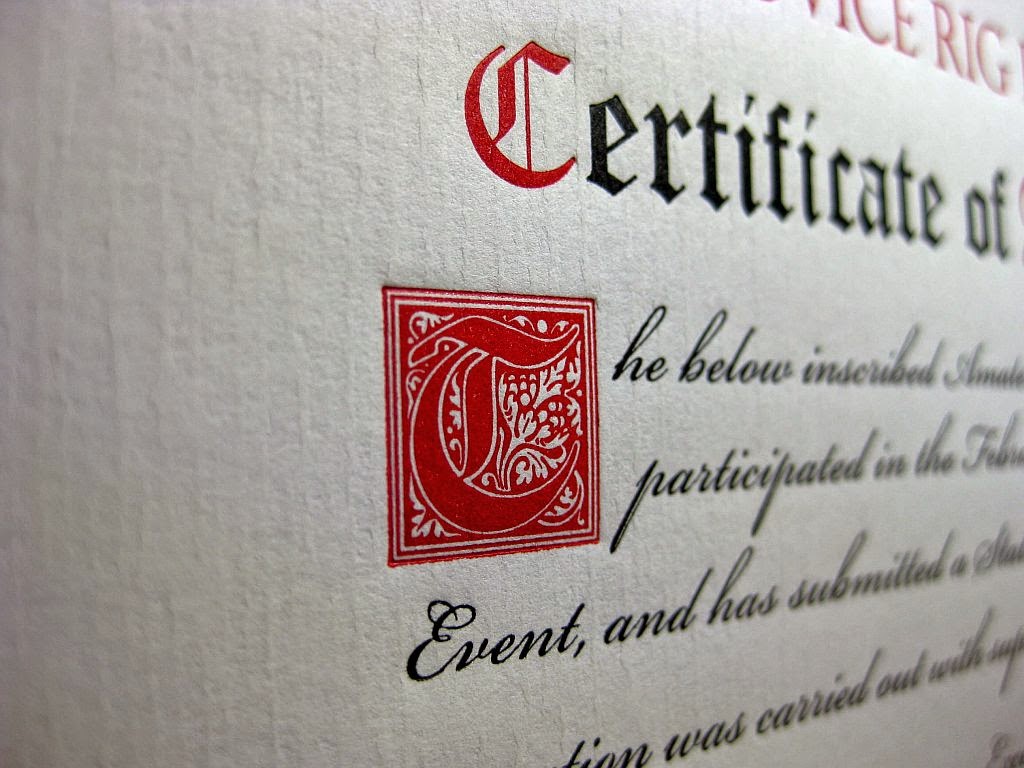 Here is another close-up, this one showing the red ornamented cap and the rubricated upper case "C".  Can you see the slight deboss?  It makes the leaves in the ornamented "T" really stand out.  Gotta love how these certificates feel when you run fingers over them!  I might add: this is the traditional method in which Diplomas were produced for the Ivy League colleges and Universities both here in the U.S., and also Europe.  I believe Oxford still employs the platen press for their certificates.  These were the presses used for a century at the Government Printing Office (GPO). 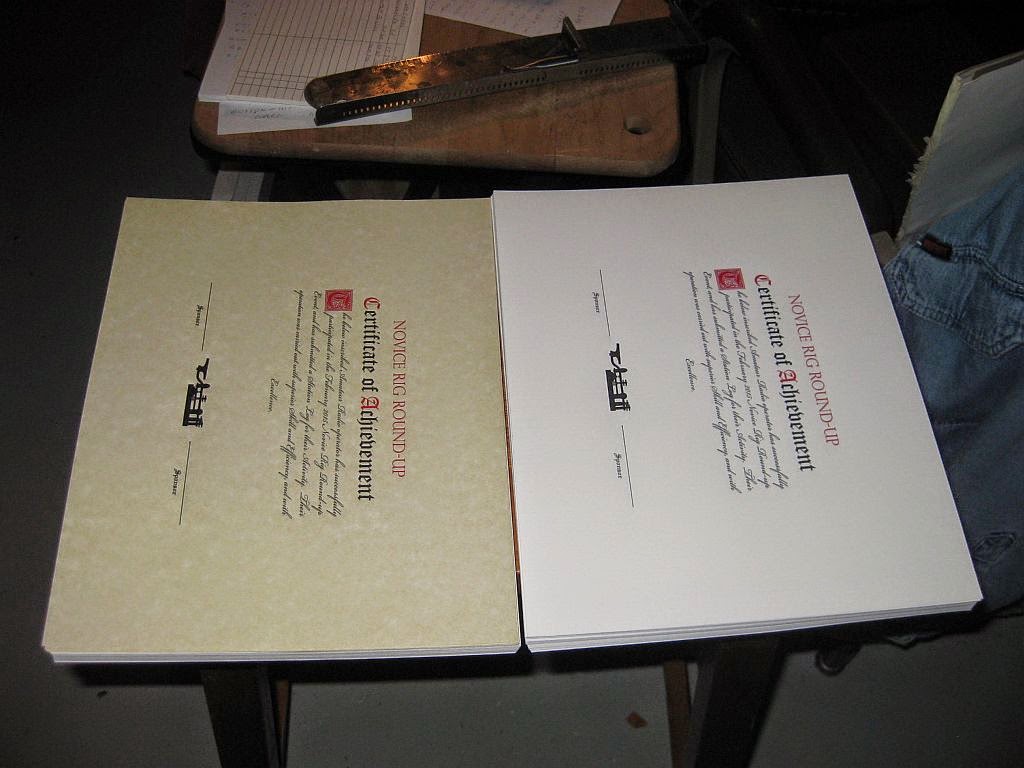 Here they are, drying out a bit.  The paper on the right is the Classic Laid, on the left is a type of vellum/ parchment which hasn't been manufactured for years.  It is actually a fine paper, embodying genuine parchment in many ways.  It is semi-translucent, and behaves just like calf skin vellum.  The top ten scorers will have their certificates printed on this vellum. But either way, Classic Laid or Vellum, these are quite nice certificates! 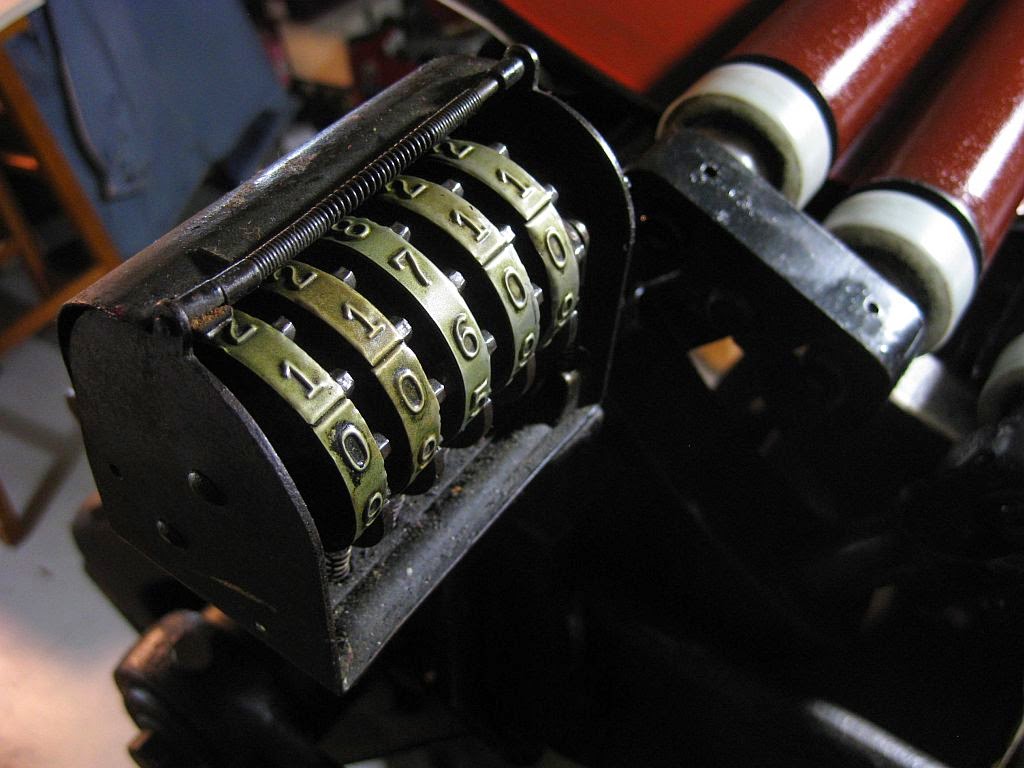 I will leave off here.  The printing is done.  All that needs yet to be done is to have the names of the operators and their accrued points printed, which will be done using either an ink-jet or a laser jet printer.  That will be yet another couple hours work, but the result will  be awesome!

Hey.  If your gonna do something, do it up right.

And here, friends, is yet another place where Wireless . . . meets Letterpress!