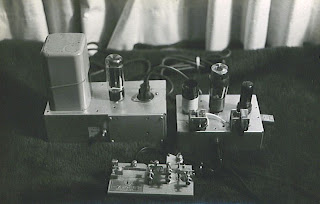 I located some old photos of my Amateur Radio Station equipment that I built from the mid 1970s, on up into the 1980s.  WD4NKA was first granted in September of 1977 as a Novice Class station, later upgraded to General Class in 1980.  But little changed with the upgrade because the homebrew equipment, mostly wired after diagrammes from the 1930s and 40s, provided everything needed for my tastes.  The above photo shows, left to right, the power supply, and right of it the actual transmitter that I used for nearly 20 years in one way or another.  It consists of a xtal Pierce oscillator (6AG7) driving the untuned grid of a 6L6G (JAN) to the tune of 40 watts plate input, class C.  It was, of course, an xtal controlled MOPA.  Naturally, what decent cw station is complete without the trusty Vibroplex Bug?  Shown is my "Champion", purchased new in 1977 from Amateur Electronics Supply, Orlando Florida, for 75 bucks, still in use today.  Thanks, Grant and Charlie! 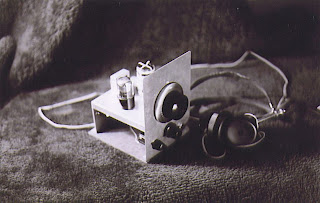 This rig comes right out of 1938 as far as parts and schematics go.  It's a twinplex regen receiver, originally built using a 6F8G, then modified for a less microphonic 6SN7, my medium mu twin triode valve of choice for such receivers.  The "cans" (headsets) are Federal Hi-Z magnetic diaphramme 'phones, circa 1936. 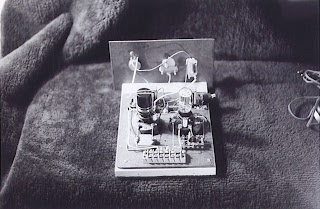 Ahh, yes.  This was my very first successful Twinplex, using the ubiquitous 6SN7, following the "Novice Special" regenerative design from the 1950 ARRL handbook.  It is built on a pine board, using an unshielded double tempered Masonite front panel.  It requires an outboard power supply, also mounted on wood.  I followed the old building philosophy of the 1920s, using 90 degree bends in all wiring.  This particular receiver was used for several years on 80m cw with a lot of success, even out-performing my Hallicrafter S-38e.  At least, on 80 meters, anyway.  Since my transmitter would swamp the receiver, I adapted to using the "swamp" itself as a sort of cw monitor.  The ACR (antenna changeover relay) was a big ceramic based knife switch. 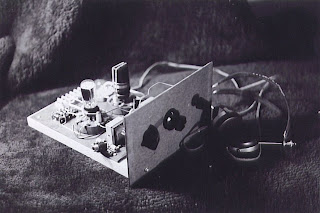 Here's a front view of this receiver.  Knobs: Fine Tune, Coarse Tune, and Reaction, or Regeneration tuning.  It was a most stable receiver for the lower bands that I used at the time.  A separate, short antenna was used, however the ACR was still necessary to hold the swamping effect down to a dull roar over the phones. 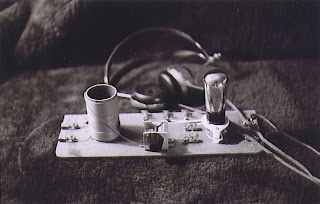 This was my AM Broadcast receiver that I used when I lived in Jacksonville (where most of these photos were taken, btw.)  It is called an "Interflex", and was published in Hugo Gernsback's "Shortwave Craft" Magazine back in the 1920s.  It initially used the DeForest D-101 Dustless Detector.  I substituted a more reliable fixed galena detector, and used a 1926 era Cunningham 330 Low Mu triode @ 45v plate, 1.5v dry cell at the directly heated cathode/ filament.  While somewhat lacking in selectivity, it was no slouch for sensitivity, and the fidelity was outstanding!  Tuned 450 - 1600 kc.  That's Kilocycles. 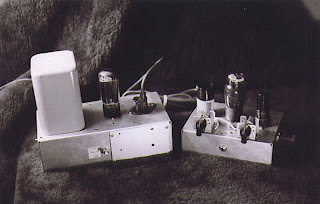 These are just a few more shots of the cw transmitter. 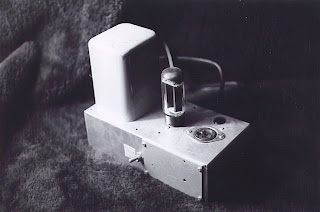 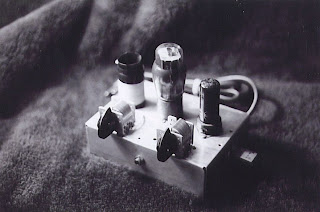 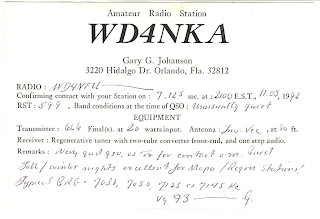 This was my standard QSL card that I used back then.  This particular card I sent in 1992, when I contacted an old friend of  mine that used to operate with me back in the '70s.  I dug out my old card form, handset metal type, changed the address, and printed it off on my 9x13 Kelsey Excelsior (1903).  I followed a format very typical for a 1920's era QSL card.  Here, you can see the description of my station.  One of the reasons why I love the older QSL cards of the 1920s is that almost universally they describe their stations in detail. 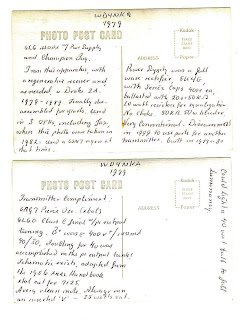 These images are the reverse of two photo-post cards that I sent along with one of my QSL correspondences,  in which I describe the photos on the obverse.  Most of those photos you see above are actually photo-post cards that I developed in my dark-room using Kodak Kodabromide Post Card stock.  Film used was Panatomic X, 35mm.  As you can see, WD4NKA was completely home-brew, from the radios, the photography, all the way down to the letterpress QSL cards.  I also did some business on the side printing "Eye-ball" folding QSL cards, business card size, and standard QSL cards for other Amateurs that wanted authentic pre-WW2 or 1920's era cards for their stations.  In fact, I still do!

That's the tour, folks.  It doesn't have much to do with Letterpress, but I must say, Amateur Radio is one of the most fulfilling avocations one can have.  Especially if communications is your bag.

Good Providence in all your Wireless or Letterpress (or both!) endevours!
73, de wd4nka


"Radio Head",
Very possibly the only ode dedicated to the fine art of Short Wave Listening on the Web.

A few bits of trivia on this recording: yeah, it's me. All the voices, in fact. And the instruments. In the background you will hear static from the receiver I had at the time, an NC 303 "Dream Receiver" tuned to 24mc. This frequency was selected because I wanted only "white noise", no actual stations which might distract from my already rather pitchey voice. Yes, that's the noise you hear on the opening and closing of the song - and some places in the middle. Not a horrible S/N ratio! In fact, this was recorded on what was then the latest digital technology, Digital Tape! (Alesis XT18, the sound recording set up in what was then my Radio Shack, now my Letterpress Shop.

Enjoy, and, of course