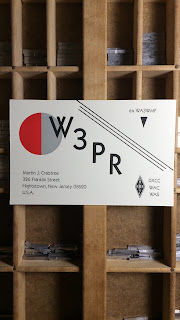 Martin, W3PR, contacted me a time back asking if I could help him with a project.  He had a design that originated with Mel Wood, appearing in the February issue of R9 magazine.  Martin already had the design all set, all I needed to do was to duplicate the elements in a vector file. Which meant re-drawing the entire card to exact scale, as much as I could determine. 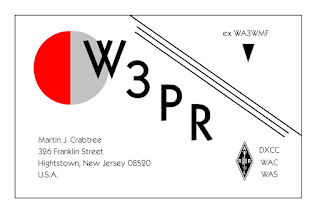 Diagonal and asymmetric linear lines, spheres and hemispheres were the iconic design elements of the 1930s. They spoke to slogans that sparked hope for a depression-weary society, greatly wishing for new things to replace the old.  A new economy.  A new deal.  A new world. 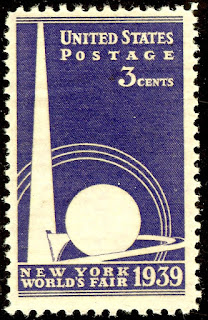 Probably the best known examples of these 1930s elements, the sphere and the obelisk, were the dominant features of the NY World's Fair of 1939.  The focus of the Fair was the new, the modern, the futuristic.  Many forget that the first televised Presidential speech was viewed at the New York World's Fair via a closed circuit line from Washington   (actual TV broadcasting did not commence till after 1946.)  In the postal commemorative above, we see the Obelisk and Hemisphere, the symbols of  the World's Fair.  Note also the parallel lines.

These designs found themselves in the world of graphic arts, from Vogue to Saturday Evening Post to even National Geographic. QST, R9, Short Wave Craft, and Radio Magazine were not immune from these elements of modernism either.  What was the inspiration for "30's Deco"?  How were these elements arrived at?  It was the synthesis of the original Art Deco, that spawned from the Pre Raphaelite movement of the 1880s - 1900 (the Paris Metro was a great example of Art Deco integrating with Construction Design!) - along with the aerodynamics of the new Century's greatest invention: powered flight.  Aerodynamic art deco, essentially.

Correspondingly, our language was affected with terminology that resulted from the burgioning aeroplane technologies, including jet propulsion technologies which grabbed the fantasy of the public.  Chrysler introduced an autombile model, the Chrysler "Air Flow".  Things became "Stream-lined".  In fact, one might call the "Jet Age" designs, the wing tipped tail lights of the 1950s, the points on harlequin styled eyeglasses commonly called "cat eyes",  and the swooping linear lines in 1950's graphics as a sort of extension of the 1930s taste for aerodynamics....briefly interrupted by a tragic world war.

The very same printing mode, technique and apparatus was used for W3PR's card as would have been employed back in Mel Wood's day.  The press is a 1936 Chandler & Price New Series Letterpress, one of the first machines of the Industrial Revolution that was ergonomically designed.  The dies used for the printing were created by Owosso Graphics, Owosso MI, using the same development and mounting techniques in vogue eighty years ago.  Wood mounted metal dies.  Only these days, the computer has replaced the repro camera in producing the negatives.  However, the making of these dies is still a contact negative and chemical development affair. 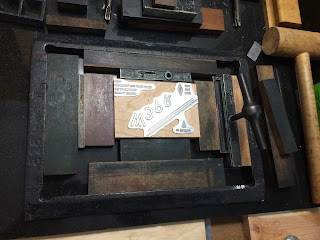 The photo above shows the die that carries the black ink, mounted - or "locked" - in the chase, ready to be inserted within the type bed of the press.  The wood used for these printing dies is cherry.  Instead of zinc, magnesium or copper is used.

There are three colours involved in this card, which means three runs through the press, followed by one more run to print the reverse side of the card, a total of four runs.  Since the red and silver/grey hemispheres are lighter in colour than the black, they are considered "behind" the black.  That is, these lighter colours will have the black ink printed on top of them, in the "foreground". I determined, therefore, to run the silver grey first, then the red. 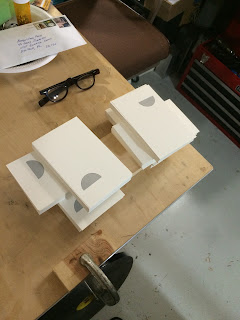 The grey having been printed, is left to dry a bit before being passed back through the press for the next run, the red hemisphere.  It took about an hour to mix and level the right mixture of white, black and blue, which would interact with the warm hue of the card's vintage white colour, to produce a grey that renders the impression of silver.  I opted to not use actual metallic silver to save the client about a hundred dollars or more....and, frankly, myself a difficult clean-up because metallic inks dry quickly and are murder to clean.  As it turned out, the predominate oil based white also dried, making the changing of colours on the press about a two hour affair. But who's in a hurry?  You don't rush in a Letterpress Shop! 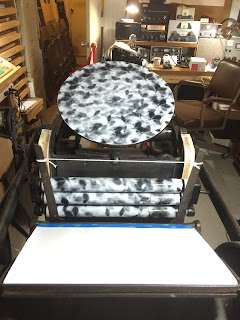 Colours are mixed directly on the ink disk.  What you see here is about 95% opaque white with about 5% black, which was later reduced to about 3%.  Then a dash of process blue.  While the ink disk turns with each succeeding pass of the roller, very interesting patterns emerge on the disc. They make for fun camera shots!   It takes about ten minutes to mix and level out the ink in this manner.  Again, I don't rush things.  Letterpress printing is a very natural-sort of art, which is why I tend to resist modern innovations in my shop such as I can. 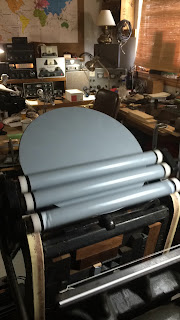 After the colour mix levels out., proofs are taken.  BTW, this is how I mix ink at the Paper Wren...by use of primary colours and by eye and colour wheel. And ...a lot of testing.  We are, you might say, "pre Pantone".  Some call it "CYMK".....which isn't quite accurate, but it's the same idea.  CYMK means Cyan, Yellow, Magenta, and Key Black, which are the colours used for colour separations.  That speaks to a four-colour print process designed to print colour photos on a page.  We do only high contrast line imaging at our shop.  No continuous tone images. 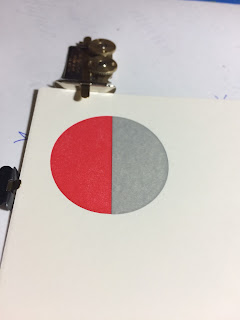 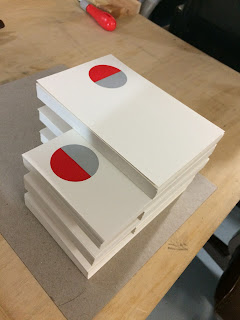 The registry of the red and grey could have been a bit touch and go.  Technically there is an allowance of about 1/128 to 1/64" variance which I allow for.  This works for "trapped" colours, but here I would be called upon to park two matching hemispheres side by side to form a perfect sphere, and hold that position for over three hundred impressions.  As such, the hand feeding of the red run was done slowly, to insure precision placement of each card on the platen.  The press behaved well that afternoon.  I swear that press has moods!  I might surmise that my press was in a good mood 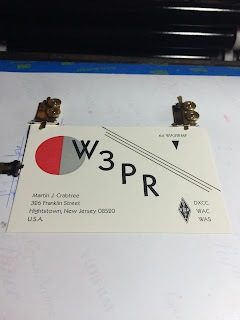 Finally, the black, or "Key" die colour, is laid down, partially over the grey hemisphere.  The colour is quite dense, and "pops".  We have a stunning QSL card here, gang!  At this point we are about nine hours into the printing, and we still have one more run to go: the back side of the card where the contact information is recorded. 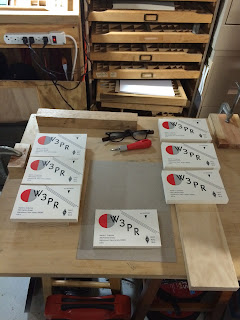 Three hundred plus cards are laid out in stacks of  fifty to avoid what is called "set-off" (no, not "offset"), where the ink of a printed piece transfers under pressure to the stock placed above it.  If the stacks are too heavy, the weight of the stack will encourage such 'set-off'.  Set Off = bad.  We don't see an awful lot of this, fortunately, because the image is impressed into the paper, which minimizes card to card contact when stacked.  The paper used here is a harder stock, the depressions are not very deep, and I did not wish to tempt fate, so precautions were taken. 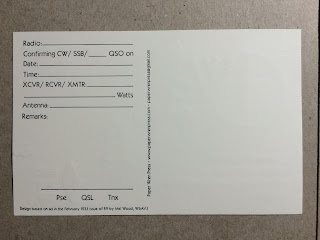 Here is the final run.  You can magnify the image to see the fine print at the bottom and center.  Martin was gracious so as to permit my advertising on the center line.  Attribution to Mel Wood is printed on the very bottom.  A tip of the hat to Owosso Graphics for holding such a very fine detail line with such small typefaces.

I was very impressed with the results.  I posted the above photos on both my own FB page, and as well the Novice Rig Round-Up FB page, and the SKCC page.  The responses were impressive.  As a result, in lieu of interest, I may begin to develop a Vintage Letterpress QSL card line of some sort.  I will post such if I do.

That's it for now, folks.  Hope you enjoyed a bit of the history, background, and fun of the "Old School".  It's a good School.

Hey! Can I throw in a shameless plug for Novice Rig Round-Up?  We are a group that celebrates the first rigs that gave us our first voice on the air.  Get your Novice On!!  Join us on our Face Book Page by clicking here!  Or, go to:

Many of you may not have seen the video I made of the last vintage QSL card that I printed, so I will reprise it here.  It's a bit longish, but it will give you a good idea of what goes into a letterpress run such as what I did with Martin's card.