The Siltronix 1011 series of transceivers was something I knew about for many years.  Before I became a Novice, most of my CB friends were using Ham rigs, modified to take them above the regular 23 CB channels.  In those days, the early 1970s, this region was known as "HF".  I remember how I wish I could afford a rig like these CBers had.  Tempo Ones.  Yaesu FT-101s (which came set up for 11 meters!), or even those CBers who had the really old rigs like the Johnson Rangers and Hallicrafters HT32s and 37s, with their big impressive receivers, the SX-101s or the Hammarlund HQ145X or 180s.  Some CBers even ran the KW Johnson Invaders!  Oh, and the antennas they had!  The towers.  The quads and yagis.

One rig that was included in this category is the Swan/ Siltronix 1011.  Although these transceivers came with Ten Meter transmit only (28.5-29.0 MHz) and a 27 MHz range that covered 26.0-27.5 MHz set up for receive only, it was an easy reconfiguration of the band switch that enabled transmit on 11 meters.  And while Swan took a lot of heat for this.... so much that they had to set up a daughter company, Siltronix, to produce the 1011B, C and D series, lest they lose QST ad space.... leave us not forget that other rigs, notably some Japanese rigs which were then becoming very popular with the Amateur Radio Market, came to our shores with NO modification required!  Oddly enough, Yaesu, whose FT-101 models came with 11 meters already installed,  never took this sort of heat, as far as I know.

I was not only well aware of this rig, it was one of the ones I drooled over at the local Ham Radio outlet, Amateur Electronics Supply.  I'd go into their old show room and just.... spin the dials.  (before they remodeled in 1980, they had about 1000 sq ft. of show room space with shelves and shelves of used and new rigs.) And yet, when I finally procured one just recently, I discovered I knew, in reality, nothing about them!  Fortunately there is a site that fairly covers a lot of the Siltronix Story and details about the 1011 in particular.  So I need not go into a lot of background about this rig.

I was recently gifted with a complete Siltronix 1011 set up, the "Comanche" transceiver itself, the SP1011 outboard speaker, the FD1011 digital read out, and a Shure 444 microphone. 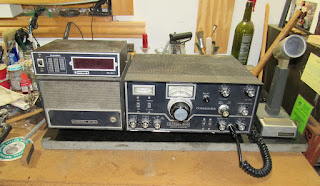 It was stored in a garage for quite a while.  The power cord was missing, so I ordered one from eBay, which came in short order.  The paint was ok, but was dull, with some major chips.  But no dents, and no rust beyond some easily sanded surface rust.

I began my refurbishing by simply taking off the cabinet of  both the SP1011 and the rig itself, and whatever pieces needed it, went into the dishwasher.  Then, when I got a clear look afterward of what needed sanding, what paint was peeling, what was what, I proceeded to treat those areas alternately with 100 grit sand paper and / or steel wool.   I then gave the top cabinet shells a new coat of wrinkle finish jet black, dried under a heat gun.  The lower shells, or bottom plate, in the case of the transceiver itself, had the front lip painted gloss black.  The wrinkle finish and gloss bottom is pretty close to the original paint scheme. 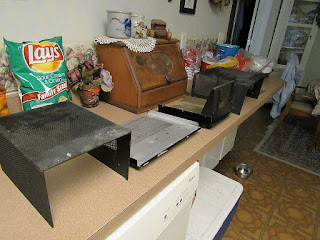 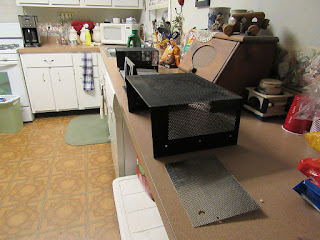 Also included in the cleaning was the speaker's polished metal grille and nameplate.  These items were actually pretty good as they were and only needed a little polishing when dried. 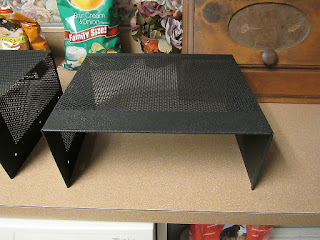 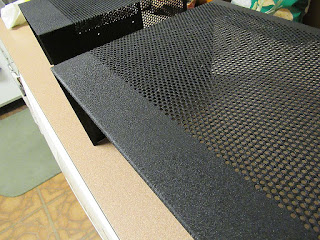 These are the top clam-shells after painting.  The top is the speaker, then the transceiver, and the bottom shot is a close-up of the finish.  These cabinets turned out very nicely!  And if you haven't figured it out by now, after reading my radio restoration posts, I am a really huge fan of black wrinkle finish.  Not only does it look authentic even when it isn't (in this case, it is.), it covers a multitude of sins, and does not require priming!


A few basic replacement items were needed: some filter caps in the power supply, one or two more electrolytic replacements beyond the power supply, and a relatively easy receiver and transmitter alignment, courtesy the downloaded 1011D manual.  After ramping her up on the Variac, she seems to behave well.  On her original 8950 final she does show 20 watts AM, adjusted to a slight forward modulation swing to bring her to approx 30w at modulation envelope peaks.  On SSB, she shows about 50 watts on an average voice level input with the mic's audio set at 9 o'clock, with 75 watt modulation peaks at a whistle,  at what I am guessing to be 1000 cycles. I don't have perfect pitch, but it's a rough estimation.  Works for now, anyway.  I was able to completely suppress the carrier following the manual, which actually fails to tell you where the mode switch should be when doing preliminary tune up!  It may not matter, but that being the case, it should have indicated so.  I plan to modify the final to a less expensive tube, these 8950s cost over a C note!

The FD1011 digital readout, which is an outboard unit made by Siltronix specifically for this radio, turns on and shows 25.500 MHz on it's red LED read-out, which is it's "no signal" default reading.  But it does not see the VFO output.   It does see and registers RF from other sources, like my Dynacom Walkie Talkies, so it does respond and read RF accurately, just not from the 1011D itself, currently.  There may be a ground fault or an open in the FD1011's feed line.   That is something I will be looking into. 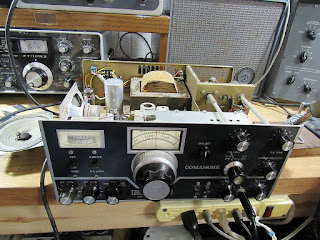 Opening her up, I was pleasantly greeted by a fairly clean radio.  While a little alignment was necessary, she was, actually, functional.  I had to re-calibrate the CB channels to correspond accurately to the dial markings, which is normal for old rigs.  The one light bulb was burnt out, but I replaced it from the local Auto Zone, a No. 57 14.3v bulb that works nicely. It's a 14.3 volt bulb that burns rather cool. I got that bulb (and the wrinkle finish paint) from Auto-zone.  One tube, the VFO amp seemed a bit weak, I replaced it, but the FD1011 still does not see the output.

Since the FD1011 wasn't reading the transceiver VFO output, I had no way of finding out where I actually was on the 28.5-29.0 MHz range.  Using my HQ-129-X receiver, I discovered at length that instead of 10m, it was altered to cover 27.5 - 28.0 MHz.  So I went on a search to find out what to do to put the original range back.  The calibration variable caps for each band are shunted by small NPO caps.  It was pretty obvious when I saw four, instead of two such caps on the 28.5 MHz VFO, that here is where the altering happened.  It was a clean job, whoever did the soldering did a darned good job.  But which caps do I remove to put her back on her original frequency?

This became a challenge.  While the owners manual (which does contain alignment procedures) contains a lot of detail, the schematic had to be downloaded separately.  Once I printed out an expanded view of the schematic so it wasn't so small, I identified the VFO and searched for the shunt cap value for the 10 meter VFO, only to discover that the values for all VFO shunts were listed as "Select".  No value given.

The 11 meter VFO was left alone by the prior owner(s).  Two NPO caps are shunted across it's calibration variable. The four NPOs across the 10 meter VFO calibration variable were presumably meant to drop the frequency  from where it was, a complete 1 MHz decrease in frequency, from 28.5 to 27.5 MHz. Each of the four cap values are different.

As I perused several web sites in search for the missing values, I discovered in my readings that the 1011 was really a modified version of the Swan Cygnet!

As such, I downloaded the Cygnet manual from BAMA, and found the self same solid state VFO schematic, I found it was, in fact, an expanded version of the 1011's,  covering four ham bands, instead of two bands.  And, like the 1011 manual, the shunt capacity for the calibration variable capacitors were listed as "select", but the values were also given!   And since the calibration variable is the same in both rigs, I have something that should get me into the ball park: 10pF.   So I now need to identify which two caps were added to the collection of four NPO caps added by a prior owner.

I told the Siltronix Owners Group on FaceBook that I would post a series of blog entries as I progress along with the restoration process.  This is installment No. 1. I should add that there is also a Yahoo Group that treats the Siltronix 1011.

So, that's the view from here.  She is getting good reports on both SSB and AM on 11 meters.  In fact, this ham here has worked three states on the 1011D in 11 meter mode just trying to get somebody to tell me how it sounds!  All on SSB, of course.  She tunes as if less power is coming from LSB than USB, but on key down, it's the same PEP on both sidebands.  Oh, and the reports are all very positive.  The Shure 444 apparently sounds very nice.  I have heard that the Astatic D-104 element actually does a better and brighter job with this rig, but I think I'll just stick with the 444 that came with the station.