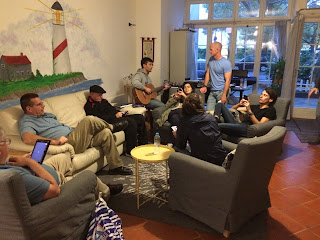 We enjoyed each other!  This must be clearly understood for anything truly wonderful to become manifest.  The Fellowship of the Saints is a supernatural thing, and this was, indeed, a supernatural experience.  (Sentence massaged from "A Christmas Carol", thanks,  Charles Dickens!)

Some of us stayed with the Phenecies at their home in Pankow.  Some stayed at the Lighthouse itself, which has all necessary facilities, showers, &c.  We had breakfast at our respective lodgings, but joined together soon thereafter.  Almost always we ate together.  When we had time, we went out into the neighborhood together.  We 'prayer walked'. We ate together at the local restaurants, or more frequently, ate dinner at the Lighthouse: Cheryl is an awesome cook!  Cheryl and Darrell have over 37 years background working in the Syrian culture, they know the folks they work with.  They are fluent in the language.  And we were treated to a lot of Middle Eastern cuisine. We also visited local middle eastern "Stuben", local eateries owned and staffed by people from the Palestine/ Syria/ Lebanon region.  It was great, and the people were awesome.  And by golly, as I noted their clientele, almost half of the folks waiting in line, in the rain, at 52 degrees Fahrenheit, were the local Berliner Einwohnern! ( the Berlin "locals")

We were introduced to what is currently popular by way of music and dance in Syria and environs by one of the Lighthouse team members.  I made a short clip of some of the folks  in our group learning one such popular Palestinian dance, which looked like a whole lot of fun, and not too simple footwork.  In fact, a lot of the dancing I witnessed reminded me of Riverdance, believe it or not!   This is one such clip.  I hope it loads and plays properly!

No Societal expert here, but I have made a point to observe a few things relative to the Berliner "day-to-day", their "Alltage", and attempted to compare this to what I remember of Frankfurt a. Main and Munich back in the 1960s, when I lived there.  I was surprised at a number of things which can clearly be attributed to the influence of the Middle Eastern  inhabitants.  One example is the Iconic Berliner "Currywurst".  The name itself should be a give-away.  This, from what I heard, actually has it's roots in the cold war, along with another Berliner Icon,  the Döner, or more properly, the Döner Kabob.   Every street corner downtown has a Currywurst or Döner stand, or 'Imbiss'. 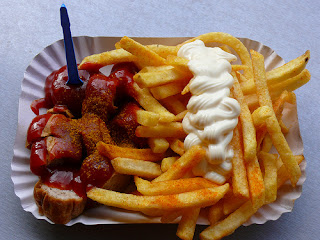 Currywurst, to me, tastes sort of like a larger Vienna Sausage (hello, "Wiener"?), only served with "Rot u. Weiss", or "red and white".   And just what was this red and white??  Why, good ol' Ketchup and Mayo!!  (well... Currywurst Sauce, which is American Ketchup based.) Now, the particular stand I got my Currywurst from did not automatically give you the mayo, you had to pay extra for the little packets - which we get free as a condiment in the United States, but must pay for here.  Yes, gang, you pay for those little packets!

Anyway, so what did my 1960's era German Background tell me?

Wow.  It told me 70 years of US occupation in West Berlin really left an impact!  Ketchup and Mayo were considered rather disgusting when I was a kid.  We would have it at school lunch, an American School for US military, Emabassy, and Diplomat kids, so we had a real cultural mix.  The German kids and teachers really had their opinions about Ketchup and Mayo.  Frankly, I am not a big fan of it myself.... but wow!  My CW (Currywurst) comes literally slathered in Curry "Ketchup".  That, friends, is a quantum change in German Cultural Taste!

They slice your Currywurst up for you, too!  It does not come automatically whole, on a bun, but I have seen it come that way.  You can get it "mit, oder ohne Darm", with or without the skin. I prefer the way I get it on Kurfurstendamm, the main downtown strip, mit Darm, all sliced up, and with a fork.  Oh, and the artwork on some of these Currywurst stands are crazy:
. 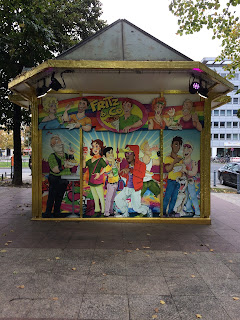 If you do a close-up of the paintings here, you might have some questions about what you see portrayed.  Berlin has a very high tolerance for alternative lifestyles, as reflected on the painting that surrounds "Fritz & Co."'s Currywurst Imbisstube.  Hetero couples, Gay couples, Trans/ drag couples... yup.  All are portrayed in what looks like Bob Montana's comic book styling.  Do you recall Archie Comics?  That's Bob Montana.  I half expected to see Betty and Veronica on one of the sides, with Jughead and Archie on the other.  Heh.   We were working in what is known as die Dreiecke, "The Triangle", the Schöneberg-Nollendorf area, the oldest Gay community in the world.  Our street is Motzstrasse, home of the largest gay-parade in the world.  It is also ground zero for arts, music, and literature.  Marlene Dietrich got her start here.  My grandfather played the cabaret circuit in this area.  Movies are filmed on location here.  German students that used "Treffpunkt Berlin" will recognize Viktoria-Luise Platz immediately.  And I had an unusual fondness toward this triangle, prayer walking it as often as possible.  These people who live here are "echt Super".  And like everyone else, they are looking for identity, love, friendships, and a human touch.  Not unlike the Refugees.  Only, they look to the world to satisfy what only God Himself is able to do.

Ok, here is another type of Currywurst stand, a bit more conventional:
. 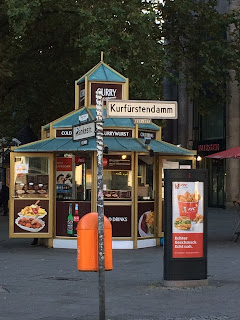 I had to get that Kurfürstendamm street sign in there.  Back when the wall was still up, "Ku-damm" was representative of all that was progress in the Western World.  The large shopping complex/ building "KaDeWe", was a National Symbol of a western commercial beacon in a dark, Eastern Block world.  KaDeWe means "Kaufhoff des Westens", or "Shopping Center of the West".  I do not think today's generation gets the import or iconic and historical value of KaDeWe, but I sure remember.  We even bought post cards featuring it back in the day.  It was one of the "Sehenswurdigkeiten", or "Sights to See" in Berlin back in the 1960s.
. 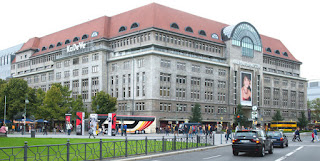 Back on the subject of Middle East influence on Berlin, here are a few scenes from the street of small shops that commonly dot the Schöneberg/ Nollendorf, and other Berlin side streets:
. 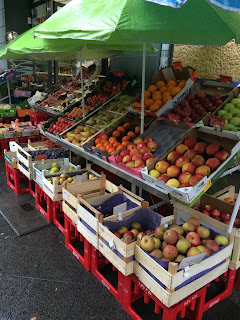 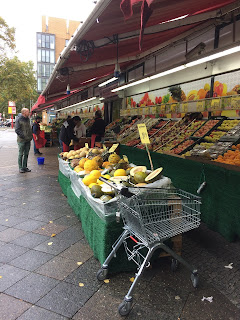 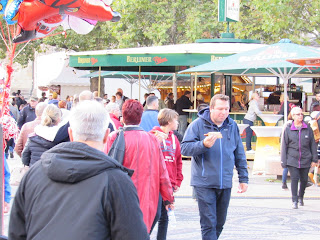 These storefront displays feature not only conventional Northern European fare, but also Middle Eastern foods.  I photographed these because I know they are owned by Arab/ Middle Eastern owners and are staffed accordingly.  I observed the clientele, which was very mixed.  Germans love exotic things, which makes it no surprise that these shops thrive here.  That last photo is from an open air food market, much of which is, in fact, Eastern or eastern influenced.  The very presence of Curry on Currywurst attests to this.  The man in the foreground is eating a Currywurst on a bun.  When they do a bun, at least from what I saw, almost half the wurst sticks out on either side!  I guess they just like it that way.  The presence of a "Coney Bun" in Germany is a very American thing.  You did not purchase Coney Buns in your local Neckermann in Germany of 1965!  Any American food back then came from the US Military PX or Commissary. 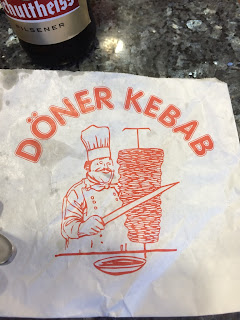 Ok, I'm gonna guess Greek, here, but from what I have read, it actually not only comes from a middle eastern influence, but was also introduced to Berlin by an American Army Dependent Housewife!   I think she was from Turkey by birth.  The shaved meat reminded me a little of a Gyros.  But no, it is definitely a middle-eastern item, and is very, very popular in Berlin.  It's actually a type of pocket sandwich, and it's really great, especially with a
. 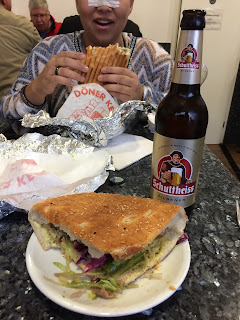 Schultheiss!  This is a Weissbier, I think.  It is locally brewed.  We passed by the brewery every day on the U2 from Pankow to Nollendorf Platz.  I think it's before you get to Potsdammer Platz.
.
Ok, the jig is up.  Yours truly loves a good German or Irish brew.  Good beer, I insist, is proof positive that God loves men.  (vid Friar Tuck, the Men of Lincoln Green) A good cigar, likewise.   One heckuva lot healthier than Coke and a candy bar!!  But I digress....

The Point
Ok, so what's the point of this segment?  It was something that was said to me while I was there.  Something about the refugees not being particularly welcomed, which I can understand.  A country and a City that is still trying to regain it's "sea legs" after three generations of Soviet Oppression, being divided in half, and having the walls come down, instead of the west going into the east to rebuild the infrastructure, the east literally fled to the west... as if the wall was going to go back up!   It drove the unemployment sky high, and rocked the German economy!  Only now are they stabilizing, and it is at this point that Germany is absorbing a huge influx.  So I get that.  But....

Germans are doing what I have always known them to do.  Make it work somehow, and they do so by adapting.  By taking in new things.  It may not be always what they want, but they do what they need to do.  And from what I see of the locals patronizing these obviously middle eastern shops and stores, I'd say that by and large, things are moving right along.  But the way of the Refugee, and the status of the Refugee, is nonetheless tenuous, debilitating, and discouraging.  This condition does have one silver lining:
. It makes the refugee look outside of his or herself.
.
It makes them to look beyond their own world, and into a new and strange world.  It makes them to see others not like themselves holding out a hand of help and, where possible, friendship.  And it makes them ask questions they otherwise would never ask.

That is why we were there.  To answer. 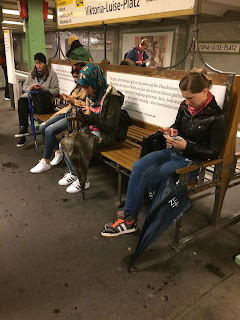 Waiting for the U2.