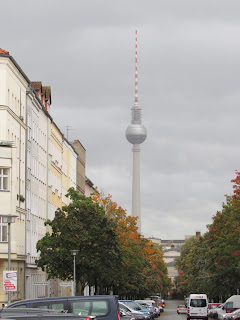 Finally, after a major rescheduling from June, October 1 arrived, and we finally left for Berlin!  We departed from MIA on Monday afternoon on Air Berlin, and flew through the night, arriving at Düsseldorf am Rhein the next morning, laying over for a connecting flight to Berlin Tegel.  After arriving in Berlin, going through customs, getting our baggage, catching a bus, taking the U-Bahn, we made it to our destination: the Berlin Lighthouse.

Our immediate purpose as a mission team was to partner, assist and facilitate. The purpose of the Lighthouse itself is to serve as an assistance, counseling, and educational venue aimed at helping Syrian and other M.E. Refugees in negotiating the arduous process of admittance and assimilation. Having endured the tragic circumstances which forced their refugee status, loss of family and loved ones, loss of home and possessions, loss of profession, job, being denied security and safety, indeed many fearing for their lives, they arrive from several directions, from west and east of the Adriatic, through Hungary, Austria, Slovenia, alternately from north Africa, across the Med, through Italy.... facing delay, separation or even deportation with every crossed border. They are taken advantage of and often defrauded of what little money they may have, in their attempts to reach a final destination. Rarely they are welcomed, always being eyed with suspicion.  When admitted, these people are placed in concentrated housing and permitted a minimal stipend.  They are permitted a period of time to learn the language, to learn skills if needed, and to find a Job.  Failure to achieve all metrics set before them initiates deportation processes.

In Germany, the law requires a specific knowledge and fluency with the language in order to have any job at all, making Deutschkurse, German Courses, essential.  As such, a man who has a family must deal with several bureaus, or "Ampts" regularly, plus attend classes, plus provide for his family's needs in a foreign land, plus make sure his kids are secure in their schooling, which is permitted to those holding refugee status.  It is essential these children are successful in adapting to and adopting their new country and culture, which is wholly and entirely different from whence these refugees came. The sooner these kids adapt, feel accepted, feel confident, make friends, and find their way socially into their new world, the lower the threat of radicalization.

The challenges facing these people, the families in particular, are almost insurmountable.  The very family unit itself is prone to collapsing  under the pressure, and in many cases, have.

Our job involved helping to prepare the Lighthouse to receive guests and visitors, all of whom are, of course, Muslim,  for the various offerings of the Light House.  Craft activities, German (two levels) and English classes, meet and greet, counseling, and providing a social environment where people can meet each other are among the many facets of the Berlin Lighthouse, established by Darrell and Cheryl Phenicie. 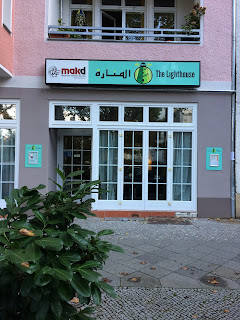 The Lighthouse is supported by CMA under the agency of the Missions-Allianz Kirche Deutschland, the MAKD, which are in turn, funded by individual CMA member churches.  They receive no Federal subsidies from the Bundesregierung (Kirchensteuer, or Federal Church Tax).  As such, they are no burden to the German economy, which is recognised.

Many of our guests spoke excellent English and German.  As such, we were able to engage many in conversation, fielding many questions as to who we are, and why we are concerned for them, enough to fly over from America.  Many are interested in the motives that drive our concern and care.

These activities kept us occupied for ten full days.  We touched them, but even more, they touched us.  These men, women, and children provided faces and names, eyes to look into, hearts to touch, hands to hold.  I will never be the same.  And many things that loomed so important back in the States faded by comparison.  It is no longer a Left wing / right wing issue, not a conservative / liberal thing.  The situation at hand is a Human situation.

It is in this environment that we engaged. 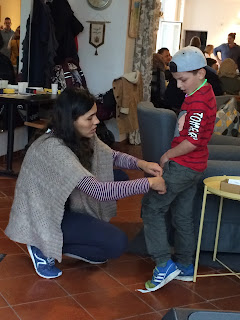 Of course, we were assisting workers who were already there (Hallo, Kelly, Scott u. Lubna!  Es freut mich ganz sehr euch kennen zu lernen, y'all!! )   I think who really grabbed my heart were the grade-school kids.  These little guys and gals, especially between ages 7 - 13, attend "Grundschule", German grade school.  These kids are, thankfully, very conversant in German.  English is good, but German is critical.  Before they ever learn English, they must do well in German, and they do!  I could engage the kids at a fairly basic level, and talk with them about their interests, how they were doing in school, their fav subjects, &c., and they could ask me questions. Of course, their parents spoke to them in their native language.  German comes somewhat harder for the adults.  Case and point:

When I was providing music for "Family Day", I took a break, and as I was setting the guitar down, there were a group of ten or twelve year old boys standing nearby, looking at the keyboard and the classical guitar I was using.  I said to one "Ach, so!  Geht es dir gut?"  (So, are you doing well?)  - suddenly all their eyes grew wide!  "Oh, du spricht deutsch??" came the response.

Suddenly, they were all around me. 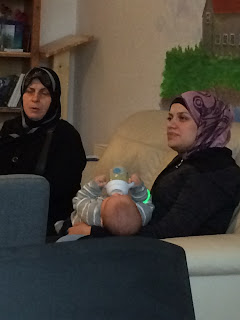 Usually, those who are in attendance at many of the functions are predominately women and children, as the men are out doing those things they must which occupies them entirely, and the older kids are in school for a good part of the day.  We were able to help out providing projects and fun stuff for the kids, so that the moms could have time with each other, and time for counseling or classes or just plain fellowship with us and among themselves. 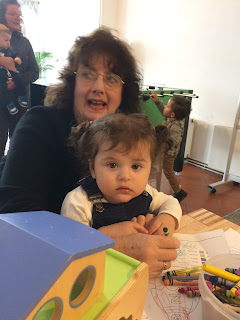 The really little kids were doll babies!  Oh my gosh, this little gal just wanted to sit in Cindy's lap!  Because of the superimposed family dynamics, owing largely to current circumstance and to some degree to cultural dynamics, the kids really crave attention.  We were able to be an extension of the workers already there to help give that attention, especially during a special "Family Day", which included live music (provided my myself and Anne Fraune, who is a recording and performance artist / vocalist / musician.  (Wow!  I got to share a stage with Anne Fraune!) -also, games / Fußball (soccer) for the kids, food, fellowship, it was amazing.  In fact, Saturday's Family Day had record attendance, because we were there.  Because YOU, dear contributor, made it possible for us to be there!  The above and most of the following photos were taken during "Family Day", or "Familientag". 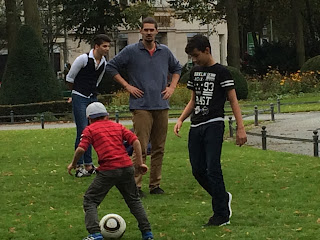 Of course, what activity-day would be complete without Fußball?  The most international sport on planet earth! 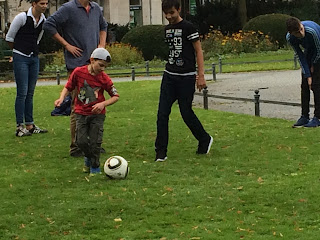 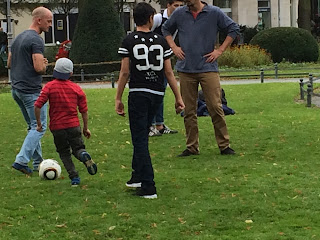 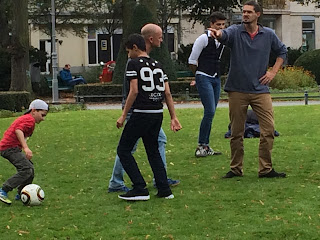 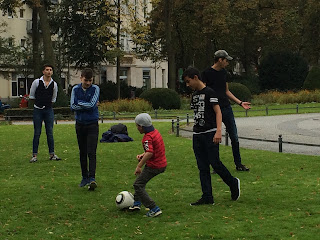 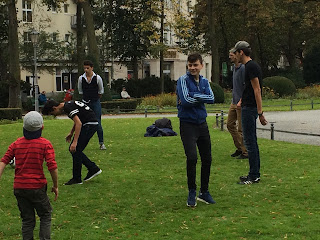 For those of you familiar with Berlin, the backdrop here in these photos is none other than Viktoria-Luise Platz, which is sometimes also used as a movie backdrop.

I mentioned Anne Fraune, who also records as Annesuu.  Those of you who follow me on FaceBook probably already know I am a huge Schlager fan.  Now, it's not that Anne is a Schlagerin (Schlager singer) - in fact, she's more a jazz vocalist and instrumentalist - but wow, her voice and vocal styling is amazing!  I hear a touch of Ella Endlich here, in fact.  Anne attends, I believe, the International Kirche in Berlin, and is part of their music ministry.  She also volunteers her time at the Lighthouse as a German teacher.

I had the privilege of sharing venue with Anne, and made a short video clip as she played my break:
.

There was more to this trip for me, which I will share in subsequent installments, involving the German People themselves.  As an Ami-Deutscher, German family, born on a US military installation stateside, yet living my most formative years in southern Munich with German Family, I see these people as my bone and flesh.  I believe Jesus had a purpose for me to be here that reached beyond the Lighthouse, onto the street, and into the Nollendorf "Triangle", and to points beyond.