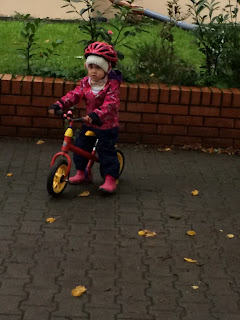 After reading the last installment, you probably have a pretty good idea about the U-Bahn and the culture that surrounds it.  Mass transit rail has been a part of Berlin for well over a century.  The closest city in the U.S. that I can find that has the same selection of above and below ground rail is San Fransisco.
.
But what about personal transportation?
.
Europe has had to deal with urban societies for about a millennium.   So many people have lived and died in Europe that burial plots are stacked.  Roads, even urban Berlin roads, can be comparably narrow.  Smaller vehicles have always been the order of the day.  In the U.S., where we have become accustomed to the wide open spaces and long driving distances, we have become used to large vehicles, pick-up trucks, SUVs, 15-20 gallon fuel tanks and "cheap" petrol.  Well... cheap compared to Europe, anyway.  Most folks in Europe live in or very near cities, distances are much shorter, and petrol is about twice what it is in the States. Apart from the Autobahn, in-town driving, available parking, and price for those precious Parkplätze, which can be quite dear, -oops.  I meant 'expensive' - have since the early days of the automobile kept Euro cars small and nimble.
.
Berlin itself has over four million Einwohnern, or Inhabitants, residents.  Approximately 500.000 (five hundred thousand - one eighth of the city!) uses the "Fahrrad", or the bicycle, as primary transport apart from mass transit.  It is one of the most heavily bicycled cities in the world.  I saw lots and lots and lots of bicycles, of many different types.  Next to that comes the Motorroller, the motor scooter, like the Vespa.  Then the Motorrad, the motor cycle.  Then the automobile, predictably the smaller, Fiat-sized compacts.  The largest personal automobile that I saw was a 1991 Volvo 240 wagon.  Next, maybe a smallish Rolls (that I've never seen before.)
. 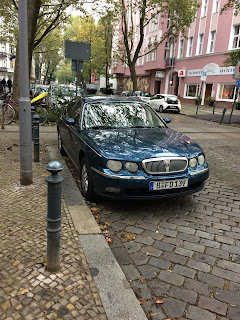 Hmm... not your typical Eurozone urbanite Auto, but a pretty neat looking Rolls, I must admit.  But hey, did you note the street?  This is Wesselerstraße, that takes you to the big downtown drag, Kurfürstendamm!  Two cars can barely squeeze by if they meet.  It gets wider in some areas but not by much.  As you approach downtown, about two blocks up, it gets tolerably wide, but man!  One block in from the main downtown drag and you are on a barely two lane brick road with cobblestone sidewalks, my friend.  And in the case of our street, right smack dab in the middle is... a U-Bahn Station entrance-way!  A Ford F-150 or even a Ranger would be doing a whole lotta narrow misses here, gang!  Best bet?
. 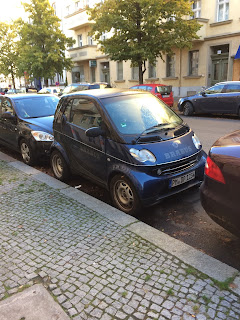 Something more like this.  How many college students can you fit into this baby?  I think it's a Renault.  Remember the "Le Car"?  Try "Le What-happened-to-my-front-end?"
. 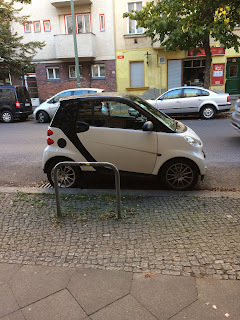 Aww!  It's a li'l "Smart-Car"!  I think it's owner chains it to that bike rack thingie right there.  Lot's of these guys buzzing around.
. 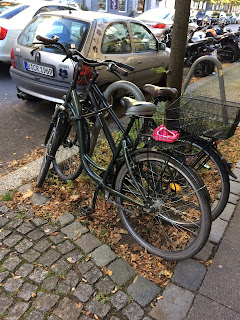 This, however, is the usual Bicycle fare.  They are pretty heavy, these bikes.  Not long distance tourers by U.S. bike-geek standards, but they typify what a large percentage of Berliners use to get from point A to point B and back again.
. 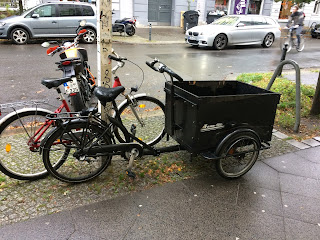 Then, there are the modified variants. You see these three wheel bucket bikes a lot, with the bucket either before or behind the driver.  See if you can figure out how they steer these things!
. 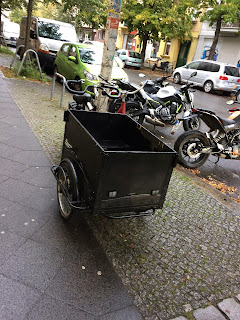 Here's a front view.  This particular vehicle interested me.  I have seen these buckets converted into baby-carriers, too!  Watched a guy hit a curb with a tow-version, with baby in the back.  Kid bounced up, then back down, out of sight, into the bucket - giggling and laughing all the way.  Cool ride.  Check out the Yamaha behind it there in the background.
. 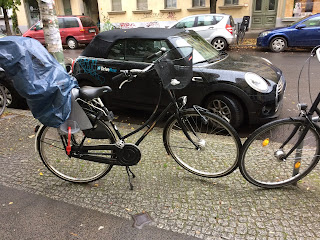 Here it is, the Berlin "Triple Crown"!  Baby carrier, Euro Velo (the bike), and a Mini Cooper.  That spells personal transit.  Oh, and while I'm looking at this photo, notice that part of the sidewalk has pavers, the side nearest the street is cobble stone.  When you see a divided sidewalk like these - and most are - know that the left side is the domain of bicyclers.  You walk on the right, and mind those bikes.  They may or may not mind you!  It's part of the commuting route, just sayin'  In some cases the bike side is painted, I think it depends upon the sidewalk itself.
. 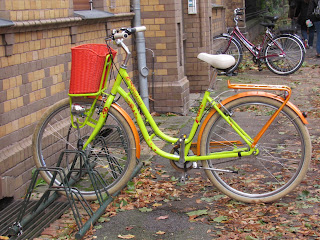 This bike caught my attention.  White wheels, typical here.  The colours interested me.  What a nice set of wheels to enjoy a sunny afternoon, amidst the fallen leaves of Autumn.
. 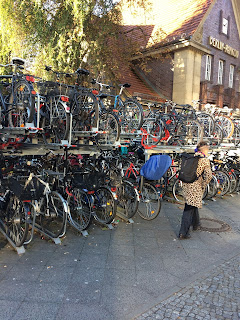 This is a double decker bike rack.  I believe the top portion rolls out and drops.  This is where you stow your bike in Pankow if you ride it to the U-Bahn station to catch the rail to work.  As, obviously, many do.
. 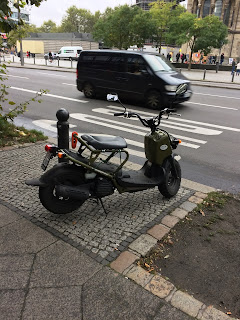 Never seen one of these scooters before!  You can prolly guess where the petrol goes.  Oh, and how much is petrol here?  The Aral station sign  read 1,19E per Liter.  So, figure 1 Euro roughly equals $1.25.  About four litres to a gallon.  Roughly five dollars per gallon.  Still wanna drive that big V-8 pickemup all around town?
. 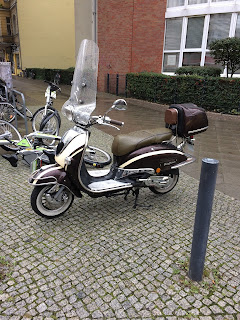 Now, this is more my style in-town cruisin'!  These scooters all fall under the general catagory of "Motoroller" (no, not Motorola.  They make VHF/ UHF radio equipment... I think.)  This particular specimen is not a Vespa, although it has the lines of the old Lambretta Vespas.  I forget what the name was.... maybe you can enlarge this photo and find it on the rear fender there.

The virtues of the Motorroller are probably pretty obvious. 1: you have better range in a shorter period of time. 2: small footprint. 3: a little bit of protection from road splatter. 4: great on petrol. 6: you blend in with the scenery.  7: they are just plain awesome just setting there.  It's like they kinda flirt with you when you walk by.  I wonder if the their owners know that?
. 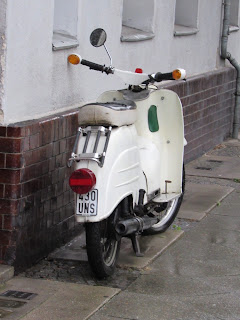 .
Ok, so rather than narrate each photo, I'll just share with you some shots of rides that caught my attention, and made me think "Hmm... if I lived here permanently, I think I'd like one of those!" 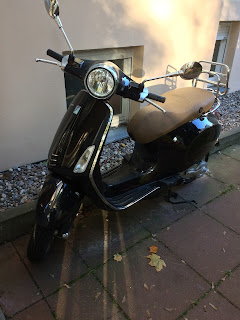 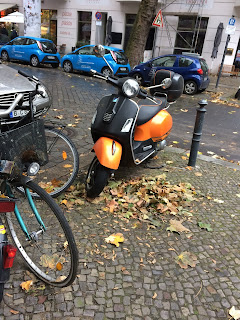 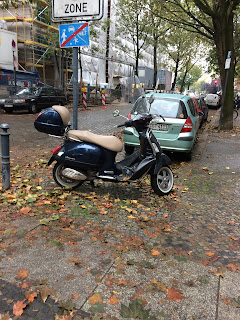 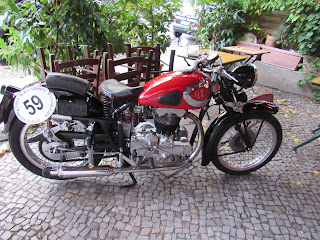 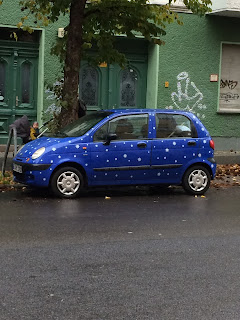 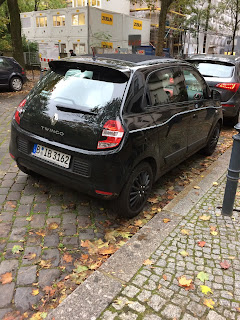 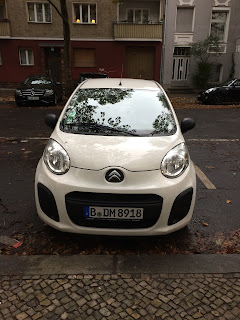 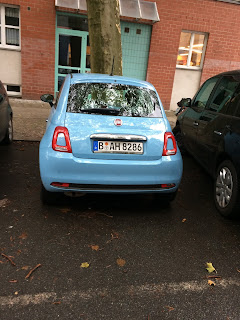 .
And, of course, the rather unconventional wheels:  The downtown Onmibus which, I think, is actually more a Tourismus thing. 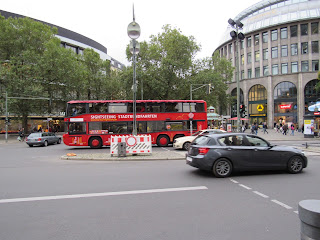 .
Last, but certainly not least, is my favourite foodie-wagon, which is actually a "Lastwagen", a truck.  It was part of the food concession in the courtyard behind the theatre where Hillsong Church Berlin meets.  These are rare, but really cool to see when they show up.  How can you resist the running boards and radiator-cap thermometre? 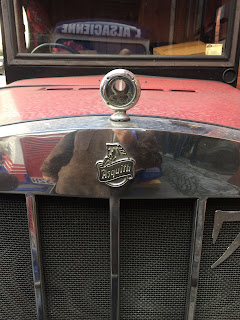 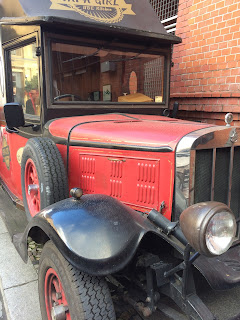 .
Ok, thanks for riding along with Installment Nr. 6!  I hope it's been fun.  What is the point here?

Stay tuned for the next installment, Nr 7.