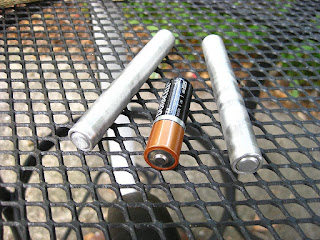 As mentioned in Part 2, the higher power Dyna-Com series utilized what I consider a somewhat unconventional battery pack system.  Let's take a look again at what the manual shows: 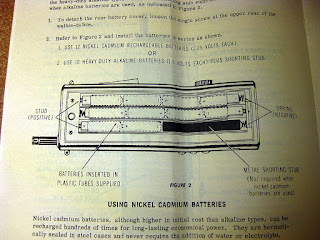 It clearly shows, and clearly tells you, to use either twelve 1.2v NiCads, or ten 1.5v AA cells, even to the degree of specifying the actual AA cell!  And .... to the chagrin of many that I can tell by reading the forums....the AA cells simply do not fit!  Not satisfied with just one, I tried three such Dyna-Coms.  No Bueno. Die gehen nichts!  The AA cells do not fit!  Now, if memory serves, the NiCads actually are a tad smaller, and that is literally all that is needed: about 1 - 2 mm length reduction for the entire four column series of batteries.  Take that 1-2mm and divide it by four, and that's all that's needed for each battery to be reduced in length by.  Was there some manufacturing shift in the past 40- odd years that made AA cells a millimeter longer??  One of y'all find out and get back to me, I've gotta move along here.

Before we leave this page in the manual, let's take one more closer look: 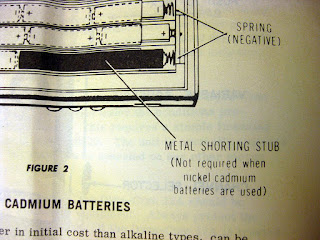 Since in the past, I only had the three watt DC's, I never had to deal with this.  The lower watt DCs used a standard 8-clip AA battery pack ....which also took AA NiCads!  Hmm ....

So, what to do?   I have been picking up Dyna-Com HTs for some years now, and never once have I seen the spacers offered as a featured item along with these units on eBay or other auction venues.  So I have never seen the actual stock item in the flesh.  But the drawing gives me a clue: they appear to actually look like a battery after a sort.  So, here's what I did.  I located an aluminium tube the approximate size of a penlight cell (AA size battery), and then I found a solid aluminium rod that would fit nicely inside of that tube.  I cut the rod and tubing to 3-3/4 inches, the tubing just a touch smaller than the inside rod.  This was the length I arrived at, which is just a bit smaller than two penlight cells end to end.  The measurement proved accurate. 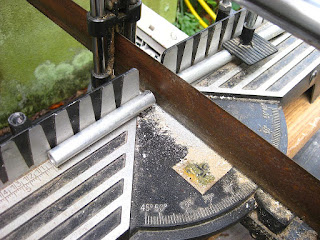 Any hack saw can be used, I am fortunate to have a mitre saw with a metal cutting blade, so I used this to do my cutting.  I also have a grinding / polishing wheel.  The grinding wheel is fine grit for sharpening hatchet and large knife blades, the polisher is actually a wire brush wheel.  All I wanted was to even up the saw kerfs and bevel the edges.  The wire wheel got a lot of oxidation off the tubing and rod (they were laying in my antenna scrap pile for years!) and smoothed out rough edges. 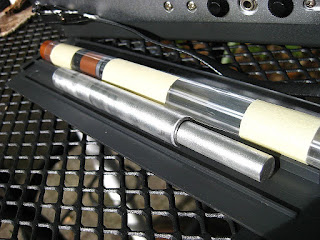 Soon I had what you see here.  The makings of what I think will be a dandy battery spacer.  All I need is to heat shrink some tubing as a nice looking jacket, and wow, maybe they will look like the actual stock item!  I sorta like going over the top on stuff like this.  Just me. 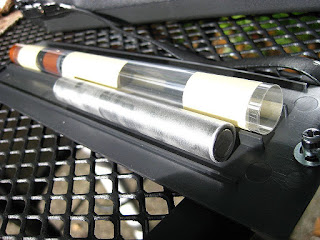 So here we go!  Ready to slide into the clear plastic battery tube.  They fit quite nicely, with good tension.  Now, for the other two channels holding batteries, I used three AA cells and one AAA battery.  This way I have at least the proper voltage.  The current will be a touch less, I should think, but not enough to make much a difference.  And to be sure, the battery indicator is behaving the same as it did with 18v, and twelve batteries in tow!

So, there you have it, gang!  Now you, too, can be just that much less dependent upon someone else to make something work.  I particularly like that aspect of DIY.  But then, that's what Homebrewing is all about!

BTW, thank you for your kind comments on FaceBook!  I know that many hams cringe at the idea of putting CB oriented stuff up on the ham radio FB interest groups, but as an Amateur myself, who is a Tube/ Valve homebrew jockey, totally cw oriented, a Mill op with a J-36, I can understand that.  It's just that I also see the surplus market drying up and parts that were once plentiful and cheap disappear.  It makes precious little sense to me to not take advantage of resources that are still with us, and still affordable, and I place the CB equipment, or at least a lot of it, in the catagory of  "ready resource". Especially these portable rigs.  Talk about fun QRP that you can take with you hiking, hunting, climbing, canoeing, biking, even parachuting (use a bolt-on base loaded whip antenna if you are gonna jump.  The poor telescopic antenna is good for about a 30mph gust.)

A look ahead: A college friend and myself will do an actual road-test and distance check between the three watt DCs, and the 5 watt DCs.  Also, a DIY "Dyna-Charger".  Lafayette made two, one sports a cradle for the Dyna-Coms.  The other does not.  We will explore the construction of the one that does not.  If you can build that, then use your imagination for the cradle-type.  And let me know how you make it, ok?

I am currently in conversation with ICM crystals, Quartz Slab, and am looking to approach a crystal manufacture in Northern Italy to see if I can get a decent price for 29.000 MHz xtal pairs.  These will be expensive.  But I think the expense will be worth it.  But even if these remain on their native Citizens Band, I intend to have a blast with mine!  Maybe talk a couple of the local 2m simplexers to join me.  Heavens!  Could you imagine that!  Hey, it could happen.  Just like we had those late night round table discussions on CB channel 11 back in '69.  It wasn't dumb then ..... we had a few hams that joined us back in those dear, dead, pre 10-4 goodbuddy days!  In fact, guess how I got into Ham Radio to begin with?