The Lafayette Dyna-Com and Other Anectdotes. Part One. 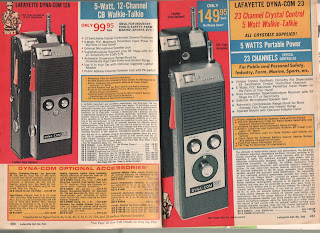 When I went to Junior High (Tredyffrin Eastown Jr. High, fondly referred to as "TE") I became fascinated with the idea of remote electronic communication.  What began as hard-wired intercoms between apartment buildings between friends (these were made from magnetic telephone receivers, which required no batteries) eventually bled over to wireless experiments with spark-plugs and broadcast band table top receivers tuned between stations to copy a crude buzz in the form of a primitive code.  This in turn, bled over to the inevitable: Walkie Talkies.  Specifically: 100mW superregenerative walkie talkies that I picked up from a neighbor kid.  A few improvements were readily apparent over our experimental spark-buzzer: no code was needed, and we could talk almost one whole city block. 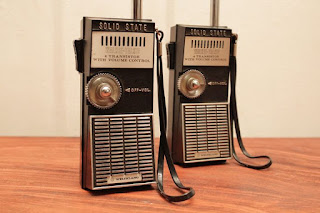 These walkie talkies were almost universally placed on CB channel 14 (27.125 MHz).  Their receivers were so wide that almost everything on 26 and 27MHz could be heard at once.  But this was 1968.  Not a whole lot of folks on the Citizens Band back then, thus what we heard were actual conversations, not a mass of heterodynes.  In fact, it was outright entertaining. The only problem was that in time, and without much provocation, these walkie talkies would surreptitiously break.  Like magic. But then, I guess, one contributing factor were our continued experiments.
It was pretty obvious to me that if we wanted to have a range beyond our block, we would need either a bigger antenna or more power.  Ideally both.  What to do?
A bewildering assortment of antenna wires were strung hither and yon, from bedroom window to balcony, across our "court yard", various groundings were explored, all of which helped to extend our range a little bit.  To increase power, best as we could understand the nature of power from a transmitter, we would series up one 9v battery after another. More volts, more power, right?  Burn-up usually happened sometime around 54 volts, as I discovered. All through these experiments, we managed to break the one-block barrier, and talk to a CBer on the next block!  It was during this conversation that I discovered the 54 volt barrier. Wow.  The great DX chase was on!
My parents were pretty quick to pick up on my radio activities. And it didn't escape them that I was up until midnight listening to my walkie talkie.  It also didn't escape from them my disappointment when my little walkie talkie gave up the ghost.

Christmas was coming.  Christmas 1968.  The new Holiday Season issue of the Sears Catalog came out.

What I opened up that Christmas Eve was the most amazing Christmas present: a very heavy-metal 1.5 watt Walkie Talkie from Sears!  It had two channels, channel nine and eleven.  Thirteen Transistors!  Wow.  Late Christmas Eve, and on into the wee hours of Christmas Day, I was talking on my new power house.  Mom and Dad had gotten me a power supply so I didn't have to worry about replacing batteries all the time.  The telescopic antenna was HUGE!  It had to be over forty inches.  And the range!  I could be heard all the way down to the end of the street, and . . . beyond!

Mind you, we lived on the middle, or second floor.  I set up my walkie talkie near my bedroom window.  I had a little elevation.  From that telescopic antenna I discovered I was able to talk between one and two miles out. This floored me.  I was using a superheterodyne receiver now, not a superregen, with increased sensitivity, lower noise floor and signal-to-noise ratio, and hugely better adjacent signal rejection.

All the cold winter, and through the spring and into the summer was I on the air every day after school and weekend evenings.  Our apartment complex custodian, himself a CBer, gave me a mobile antenna sold by Lafayette called the "Tiger Tail", a center loaded CB mobile radiator mounted on, essentially, a metal box with a knob and an SWR meter.  You could literally tune out the reactance right at the feed point.  The neighbor upstairs let me bolt it to his balcony, the highest floor available, the third floor.  With that outside antenna, I managed to work from Wayne/ Devon, over the Old Eagle School Hill, and down into the Von Muehlenberg - King of Prussia area.  That was about eight to ten miles!!  One watt output, radiating from a center loaded quarter wave whip bolted to the steel rail of a balcony seventy five feet from the ground.  Not too shabby!

I was wholly absorbed.  I cannot express the thrill it was to break that one block barrier.  And then, the indescribable rush of working into the next two blocks.  Then working one mile!!  Then three.  Five.  Eight.  One mobile on the Main Line (Route 30) guesstimated he was about ten miles from me once.  I entered that into the log book I was keeping.

I began to notice those other Walkie Talkies in the Lafayette Catalog.  We had an LRE (Lafayette Radio Electronics) at the King of Prussia Mall.  They carried these solid steel and chrome walkie talkies.  One was an amazing 100mW two channel with a tone alarm and superhet receiver, called an HA-73. 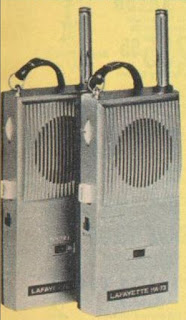 Eventually, years later, I would buy one of these, but what really caught my eye among these Lafayette walkie talkies even more was what I considered my next logical step up in my radio endeavors, right there on page 459 in the Lafayette Catalog : the Three Watt, Three Channel Dyna-Com 3.  My 1.5 watt Sears Walkie Talkie was great, don't get me wrong - but the Dyna-com 3 shown in this catalog was a beast!  I just knew that with one of these, I could work my way out to Paoli and Berwyn, a good ten to fifteen miles, with ease, and possibly even all the way down the Main Line to Villa Nova University, almost twenty miles! Especially if I could also get that Range Gain II antenna, also shown in the catalog!!  No telling what horizons I could explore.

Now mind!  I was anything BUT bored with my Sears rig.  It was fantastic. Every night was a new adventure. But it is human nature to want to go just . . . just . . . one more step. To push the envelope.  As such,  I opened up a proclivity from which I suffer to this day, one which has dogged me all my Ham Radio life : just one step more.  One foot higher.  One watt more powerful.  One more QSO.  One more mile. 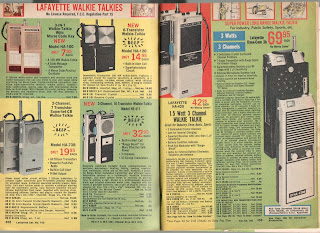 The Dyna-Com 3B.  This was the Daisy "Red Rider" of Walkie Talkies!  There was a kid out on Old Darby Road that I would be able to reach from time to time, who had one, with a 102" stainless Steel mobile whip mounted on his rain gutter.  It seemed that I could always hear him better than he could hear me, a range of about three miles.  He was considered DX in my log, btw.  I rode my bike over to his house once, carrying my Sears walkie talkie, and saw his Dyna-Com with my own eyes.  I got to hold it.  Wow . . . it was heavier than mine, and my Sears was no light weight. It had an S-meter of sorts.  And like mine, it had a leather case, only his was more robust.  Everything about his Dyna-Com seemed over-the-top.  The chrome and steel body.  The three channels.  The three watts.  The notably longer telescopic whip.  Even the case!

I want you to know that at the time my parents purchased my 1.5 watt Sears walkie talkie (or HT - Handy Talkie), the price tag was about fifty dollars.  That was 1968.  This amounted to one quarter of my dad's weekly take home pay.  That was a lot of money.  Seventy Dollars for a Dyna-com was nigh unto impossible, so I never breathed a word about my wanting a Dyna-Com to them.  I may have been an ignorant kid, but not a stupid kid.  My parents gave me an awesome gift at great sacrifice, and I was determined to be satisfied.  And, really, I was.  Nonetheless, that Lafayette catalog sure was fun to look through, though.  Especially the Walkie Talkie section.

In the 1960s and on into the 70s, Christmas brought forth a whole raft of kids, being gifted with toy walkie talkies.  Almost universally they were on CB channel 14.  At one watt, I found that I was the loud voice the kids were mystified by, and listened out for.  I would greet these kids with a "Merry Christmas", which was quite an exciting thing for them. Over the years, this had come to be quite a tradition with me, to listen in over Christmas Day to Channel 14, to send a Christmas Greeting to the kids with their new walkie talkies. Some of these kids were eventually likewise bitten by the radio "bug" as did I, and they persisted in their radio activity, becoming themselves part of our on-the-air regulars.  Some of these kids, like me, continued to upgrade to the larger walkie talkies.  Some, in the ensuing years, became Hams, just as I did. All had their seed-bed experience using these amazing walkie talkies, and pushing the envelope with them.

Lafayette had quite a run with their Dyna-Com line of  walkie talkies.  They were specifically designed for public service or private/ professional field use, which is why they were so ruggedly built.  They ranged from the 2 watt two channel, up to the the fully featured 5 watt 12 and 23 channel models. There were models available only in certain countries that used FM on 27MHz. All of them built like Panzer tanks. You might notice if you have the catalog,  the hard-hat wearing construction worker, shown on the pages where are the Dyna-com walkie talkies.  That was your clue what sort of environment they were intended for.
These higher watt rigs usually worked on 15 volts, and carried 10 AA cells, or 12 nicad cells.  They had an odd battery "spacer", which took up two AA cell lengths in the holder, for use with Alkaline batters, which was omitted when using Nicads.  The batteries and spacer was slid into plastic tubes which helped to hold the batteries in place, in case they may be prone to wobbling in the rear battery compartment. You could directly recharge the nicads through the charging jack.  The crystals in the 12 channel Dyna-Com were accessed by the front steel panel.  These units were spaciously designed.

As I draw this segment to a close, let me provide a link to download the Dyna-Com 12A owners manual. In later installments I will chronicle in greater detail the Dyna-Com walkie talkies as I go through the paces with both the 3 series and the 12a series.  We will be looking at their set-up, examining and solving the "Battery Dilemna", listening to their audio, doing point to point range tests, and then replicating my own early set up with an external power supply and antenna.  Just to see what these "bricks", as I fondly call them, will do.  At one point I hope to convert these rigs up into the Amateur Ten Meter "AM Window".

My point and purpose in this article, Part One, is to provide a little background as to why I have a special fondness for these hand held marvels, and the significance they played in my having become a Radio Ham.  There is in reality very little on the web regarding the Dyna-Com hand held portables, their practical use or known modifications.  It is my goal to help meet this deficit.