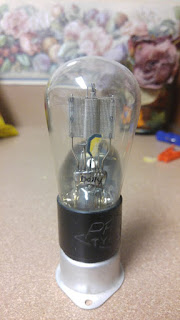 I thought a might share an article I wrote years ago.  A few regional Ham Radio club journals picked it up.  I think it dates to around 1997.  I just copied and pasted it directly from my old Radio site that I used to use to post my stories.  Publications would pick the stories they wanted from there.  But that was long ago, when I was a free lance writer for the electronics hobby industry.  But this story came to mind recently, and I thought I might re-air it here.  It's a story about a very special triode that I picked up about thirty years ago.

From the Radio Rescuers Journal, entry #2.

Not too long ago, at the Orlando Hamcation, I happened upon a ballon type '27 triode. Just your garden variety a.c. tube. Probably dated to around 1929. It had lots of dust and some kinda smeary stuff on it, making it look really bad. I offer to pay a buck for it, and the guy behind the table says "sure."  Off I go with my little treasure to hopefully use it to give life to a rather dormant Doerle regen I was reconstructing.

Old glass tubes are a funny sort of device, with a charm all their own. Mostly they are mirrored with a silvery internal coating, and I would be a liar if I told you that I knew what caused it or even what it was.  Just one of those mysteries I choose to retain as a mystery.

Very simple devices they are, little more than a dim lightbulb with extra wire stuffed in to form an anode, filament, an indirectly heated cathode and a gridiron. All this is mounted internally on a single glass pillar, usually bearing the hand written mark of some unknown quality inspector. A cypher of a sort, usually a number or a number-letter combination. Locked in a vacuum of time for the life of that tube. I wonder if they had any idea how long some of those tubes would last?

Well, after coming home, I began to work on cleaning off that tube, using dish washing liquid and a soft cloth. The smeary stuff came off, but the dust had hardened into a thin filmy concrete which took a little elbow grease. "Uhh-ohh", I thought as I began to hand polish off the surface:  " There goes any decal or print on the envelope!" But I consoled myself with the knowledge that at least I would still have that classy silvery stuff, whatever it was.

And then I saw it!

Behind the silver! There was an area in the silver coating that was very thin, exposing the central pillar of the tube. Almost like looking thru a keyhole, the silver framing the view. There, written on the pillar for all to see, a single name.

No cypher, no number, no arbitrary letter, but a name! Immediately, this became no ordinary tube! It became a link to a person. I began to wonder who this person was. Did she work part time for Philco to get thru school? Did she fare well thru the Depression just about to befall her? Did she take pride in that tube as she carefully painted the five letters of her name on that tiny, tiny pillar before it was sent in for the envelope and evacuation process ? Am I getting carried away ?

I had a suspicion that of all the '27s in the wide world, THIS one would be among the best performing. It had to, it bore her name. . . and it is.

Remember, whenever you affix your name to something, that something may last well beyond your puny years. Remember too, that the performance or quality of that thing will be forever inextricably linked to you. Whatever you do, do your best.