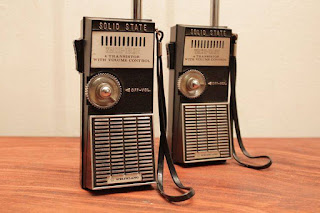 I've always been fascinated with talking around a corner to somebody out of sight. Hearing somebody that could also hear me, preferably around a corner and out of sight, some distance away. It was fun when I was very young, about seven, spending summers at my grandparents place which had some acerage, and I learned to make tin can telephones with the neighbour kid, stretching the string across my grandmother's big yard, although you couldn't stretch it around a corner.  When the corner touched the string, the vibration stopped and so would the voice.
We overcame that eventually with a garden hose.  So we made a garden hose telephone.  But garden hoses are only so long, and we had only so many neighbours willing to let us borrow their hoses so we could connect them together to go between Gramma's house and my cousin's house at the other end of the property.
Some years later in seventh grade my science teacher made the mistake of showing us how to make a real telegraph with a couple iron nails, wire, a cut up Coke can (remember when soda cans had to be punched and were made of ferric metal that would stick to a magnet?) - and a couple blocks of wood.  Just add two 1.5v Dry Cells.  Made both key and sounder.  Even though we had to learn code to use it, we now had a system that could be used over considerable distances so long as there were two wires and a couple dry cell batteries.  Soon our apartments had wires going from one to another as we learnt the ropes of land line telegraphy and DC circuits.
It was just a matter of time before we kids figured out that we could screw a telephone receiver on each end, remove the battery, and simply talk through that receiver.  We read from books in our library that the standard telephone receiver (at that time, 1969) used an Edison carbon button microphone and a Bell magnetic transducer.... which was the original Bell Telephone invention of 1876, and required no battery.  The transducer alone could be used as both microphone and as receiver.  Distances were limited only to the amount of resistance of the wire itself which increased as the amount of wire used increased.  Philadelphia to Washington D.C. was about the limit.

One day I was talking with my friend Jeff over our little telegraph/ telephone, when suddenly we heard a voice that wasn't part of our group.  Somebody had hacked our line!  Someone calling himself "The Texas Traveler"!  This peaqued my curiosity, and at that point we began to discover how to leave all that wire behind.

By this time we had returned to the U.S. after having lived in Germany for some years and we were living in the Philadelphia suburb of Devon, off the Main Line.  I was given a pair of very inexpensive walkie talkies at some point.  It was amazing what I could hear!  The signals increased when I touch the antenna to a grounded metal object.   What I had was a four transistor pair of superregenerative walkie talkies, a then common kid's toy.  It claimed a range of up to a quarter mile.  I gave one to my friend Jeff who lived upstairs and kept one down stairs in my flat.  These little walkie talkies became a focal point of attention and interest.  Sometimes foreign language broadcast could be heard drifting in and out.   There was a constant rushing sound accompanying these voices unless the loud voice of the Texas Traveler would announce his presence.  When his signal was intercepted, that rushing noise disappeared entirely!   Who was this guy, Texas Traveler?  Was he close?  We would call after him, but it was to no avail, like calling after those foreign service broadcasts we could hear now and then.

I discovered that with the aid of a rubber band, I could park one walkie talkie by my brand new cassette tape recorder, and take the other with me on my ten speed and check my range.  Soon I went from telescopic whip to a wire stretched across the area between my apartment and the next building.  I could ride my bike a little further.  Maybe almost half a mile before losing the signal.  Then I found I could snap two 9 volt batteries together and hardwire it into place.  Then three.  I changed my antenna around to connect to Jeff's balcony above mine.  Sometimes I ran both wires, the one across to the next building and the one leading to Jeff's balcony above me.  I had as many as five batteries wired into this poor walkie talkie!  With each innovation I gained another few yards.  My goal was one mile.

Then one day it happened.  I made contact with another station.  It went something like this:  I had just added my fifth battery and I took the contraption outside.  I was calling to see if any of those voices I could hear could hear me as well.

"Is anybody there?" I would call.  Several times.

Then suddenly the rushing noise of my receiver stopped and a clear and very loud voice came over the speaker:

"Come on back, Yellow Bear".

"How about it, Yellow Bear?"

Silence.  Only the rushing sound.   I keyed once again

"Are you talking to me?"


Who was this?  It sounded too young to be the Texas Traveler, who sounded like an older man.  Whoever this was, he was about as loud!  And.... he heard me!!

"I'm Gary. I may have sounded like I said that.  I was calling if anyone was there.  But I can use that name if that's ok."

.... and at that point the walkie talkie made a funny noise, gave out a weird chemical smell, and died. End of conversation.  One battery too many, I guess.  It was beyond my ability to fix, but regardless, the Radio Bug bit.  All it took was another party to tell me that I was being heard.

This became a defining moment for me.  Being heard and hearing back.