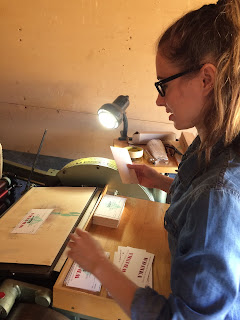 Ally, the primary printer at 9th Letter press, the person responsible for their awesome Letterpress impressions, paid us a visit at my invitation recently.  I wanted her to try her hand at one of the rarest letterpresses around, the "Open Kluge".  I have not only what I believe is the only one in Florida, but also very possibly the last one to roll off the ways at Brandtje Kluge.  She was built in 1966.  By letterpress standards, she is a baby, a brand new press for all intents and purposes.  Interestingly, BK foresaw the existence of OSHA, and provided not only full covering of the most dangerous areas of the press, but also provided warning decals, lock down and tag out features.  As far as a Gordon Style platen press goes, she is probably the safest around.

We worked on the red-run of a three colour QSL card order.  The order was for WD4NKA, the station that I maintain directly in the 'Pigeon Hole' print-shop itself.  What Ally printed was the call and address information, in deep red (crimson-process black, 25:1)

The Kluge, affectionately referred to as "Brother John", named after it's former owner, the late John Moran, runs a tad faster than the 1890 era 10x15 C&P used at 9th Letter Press, which required Ally to develop a "feel" for the feeding cadence.  Since we were running some pretty broad areas of colour as far as text goes, we double-rolled each impression.  Of course, with four rollers and two vibrators, the Kluges have one of the finest ink distribution systems in the world of platen 'job presses'.  Some would even place them ahead of Heidelberg Windmills in this regard. 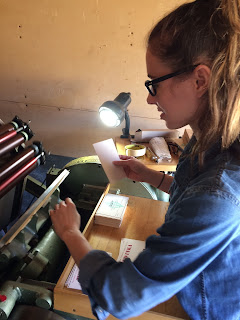 We used the laser cut standard relief polymer dies made by Concord Engraving, which holds up to an approx. .02mm line width, exceeding copper and magnesium!  Polymer dies are something new to me, having incorporated it only within the last couple months.  I also use the standard relief Boxcar Base.  I have been unexpectedly pleased with the results! 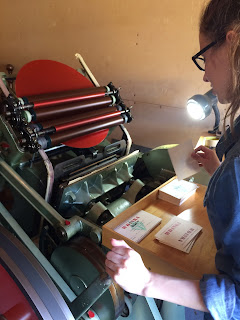 Ally is a pro.  But then, she has a lot of experience with heavy iron under her belt.  It took no time at all for her to get the cadence.  Of course, she was a tad bit nervous with me standing there taking photos, so I tried to get out of the way as much as I could.  I could tell she was enjoying working with Brother John. 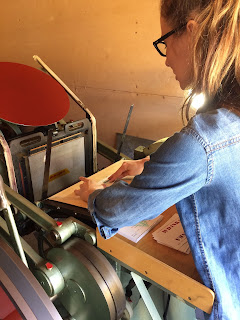 We used the low profile custom made brass "adjustable" gauge pins, which provide sufficient clearance with the base to enable easy positioning of the stock anywhere on the platen we wanted.  Ally also showed me a technique of positioning the die on the base by placing a bit of tape on the front side of the die so it would hold to the tympan sheet just enough so that when you closed the platen against the type bed, the die would transfer onto the Boxcar base.  This made prepositioning of the gauge pins and stock very accurate, requiring only a very slight horizontal touch up.  Thanks, Ally!  You can teach an old dog new tricks after all! 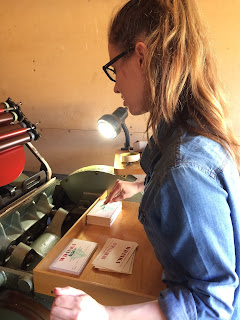 My hope is to eventually have a brick and mortar location where ALL my presses, my stitch binder and my heavy cutter, the imposing stone, the type cabbies and galleys can all reside together instead of traipsing back and forth between my home shop in Deltona and the "Heavy Equipment" shop in Orange City (Florida).  We'll see how that goes.  I am considering doing a smallish version of what the Arm does up in NYC: give workshops and possibly rent out press time for folks to take advantage of my resources.  Especially, Stetson U., Seminole and Daytona State College arts students.  Who knows, maybe we can find someone with deep pockets willing to invest.... or..... bite the bullet and try a Go Fund Me page.
You never know....

Ok, so how did the finish product turn out?  Well, considering that these cards ran through the press three times, they came out spot on positioning! 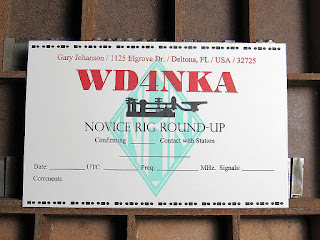 This card is part of my special series especially designed for Novice Rig Round-up, which I have offered at a special price for members of the group.  It sports the NRR diamond logo in blue-green, a J38 Speed-x hand key silhouette (taken from one of my own keys!  It was hand drawn, it's not clip art!) and QSL date field in black, and my address info and call in red.  Since the green and the red compliment (opposites on the colour wheel), the card itself is a fairly vibrant rendition of a classical QSL card design.

That's about it for this entry in All Things Wireless & Letterpress.   I want to sign off with something special for Ally as a thanks for visiting the Paper Wren.  It's a video I made a few years back.  I told her about it, and I said I would send her a link, but I thought I would do one better, and provide that link right here.

The video's sound track is a homegrown recording written, performed and recorded by myself called "The Printer & His Devil".  It's a song that plays on historical events and the printer's mission to disseminate the news to his community.  I wrote the song to commemorate the home town printer and the important roll he or sometimes she played in the life of their community.  Oh, and just a head's up: a "Devil" is what a printer's apprentice was referred as.

See if you can identify the historic events based on the hints mentioned in the song.  Also, if you can, listen through earbuds or headphones.  Computer speakers tend to have poor fidelity.  My voice is pitchy enough, it needs all the help it can get (sigh).

(tech note: we had to stretch the intro out to about two minutes to cover the whole eight minutes of video.  No professionals, here.  It's all home-grown.)

The video captures the set-up and printing of a two colour business card on my C&P at the home studio/ shop.  If you go to the YouTube page, I believe there is a link to the lyrics, if anyone is at all interested.