Opening note: to view enlarged images, click on the photos.  Save image from the link location by right-clicking and selecting "save image as".  These photos download at approximately 50%, and can be doubled in size on your computer.  I use Irfanview as my go-to viewer. 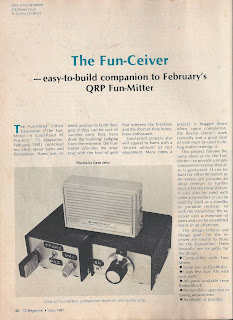 1981 was a pretty good year for projects, really.  At least for '73 magazine.  Along with this featured article by Mark Oman, WA0RBR, '73 magazine also covered a tube regen and matching transmitter, breaking an almost twenty year silence on such "hollow state" technology!  And indeed, such an article did engender it's share of criticism.  In this blog installment, however, we will review an equally fascinating project, only this one is a classic of another genre: solid state!

In 1981 when this article came out, I was living up in Jacksonville, my first time living away from my home town of Winter Park, Florida.  I was a broke, newly licensed Dispensing Optician at the ripe age of 26.  The last thing that I could do was pop off a couple hundred bucks for a small QRP rig. I was living an a sub-let condo that did not permit an outside HF antenna.  I had my trusty Kenwood TS-520SE with me, and to be sure, I did eventually put a disguised antenna up, but I also wanted something far more portable to take with me to the beach or at least to the St. Johns River where I could sit and watch the big transport ships roll into port with their holds loaded down with Hyundai and Toyota automobiles.  There was a park on the campus of J.U. where I could set up on a picnic bench, toss up a wire, and work some QRP . . . or just listen in on the band.

The Fun-Ceiver shown above seemed to be right up my alley.  Very low parts count and what parts this receiver required were readily available at the local Radio Shack up in Regency Square, near the Pearle Vision Center where I worked. 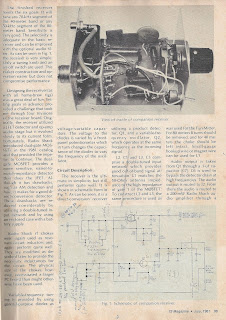 This article is amazingly concise and very detailed, especially for the builder of 1981.  The only thing I wish was that the author include substitutes for the active components, which are referred to only by their Radio Shack designations.  The same is true with the "Fun-Mitter", which will be the next installment.  But thankfully, unlike 1981, we have the Internet and Google.  All these references can be cross-referenced.
For our purposes with this particular article, the active components used are the 3n211/ 40673 Dual Gate mosFET, the MPF-102, and the 741 op amp. I purposely digitized these scans of the article such that they can be clicked on and enlarged.  Of interest here is the mixer circuit itself, here being operated such as to produce an audio difference (Direct Conversion) - can also be used at the RF level as an RF mixer with only a couple component changes.  I will discuss this down-range.

You might notice these pages are worn and quite marked upon with my own construction notes from countless replications and slight revisions.  I found the variable diode set up for main tuning in this article was very drifty, so I replaced them with a conventional tuning cap which helped considerably.  While the modified Radio Shack 10uH chokes were fine, I opted to wind my own from scratch using powdered iron cores from the local surplus.  Later I used T-50-2 and T-50-6 Amidon Toroids. 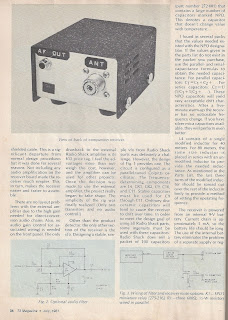 Looking back on this project, I have to note that in the midst of it's "bottom line" minimalist approach, the author included an active 741 op amp cw filter!  In fact, one of the reasons why I am revisiting this article is because I plan to use this filter in a project for Novice Rig Round-Up!  Googling these op-amp active filters, I find that several can be cascaded to achieve differing levels of filtering.  This is something I found to be characteristic about the circuits shown in this article: they can not only be easily duplicated, but also cascaded with little or no modification.  For instance, the mixer/ local oscillator in this project can be operated not only to produce an audio difference frequency, but also a much higher radio frequency differences.  I made a 40 meter down converter using this very circuit with one capacitor change in the output, substituting a 100pF SM cap.  The local oscillator was a xtal pierce 2n2222a circuit.  This RF mixer fed, in turn, a duplicate mixer using a VFO local oscillator, producing an audio difference output. (a BFO/ Product detector.)

A superhet in it's most basic of elemental form.  Simply from cascading what basically amounts to this receiver.

A decade or so later, this very circuit became the experimental down-converters for my prototype Regenerodyne.  They worked fabulously feeding a regenerative detector which had more than enough Q to select the untuned output of one of these mixers, perfect to tune about a 500 kHz wide "IF Window", which became the heart and soul of the Regenerodyne.  All thanks to this little 3n211 mixer and an ultra simple xtal LO!   Once I "road tested" the regen-converter scheme, I built down converters using a 6J7 or 6K7 pentode and a 6C5 xtal LO....just to keep things "all hollow state" - but rest assured, these little minimalist mixers shown in this article as a Direct Conversion mixer, and used my myself at RF, work very well for the purpose, in fact, possibly with a lower S/N level!  Today we live in a post-3n211 world, which in itself has become about as scarce and expensive as many tubes/ valves!  Even the then-popular CA3028 vhf mixer IC which found use in many HF DC receivers is become unobtainum.  But the devices that substitute for them these days are far more silent, thus if you are interested in trying these mixer circuits, try out these modern substitutes! 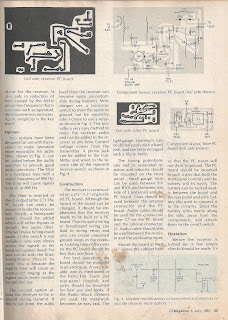 Radio Shack sold Sodium Ferrichloride in sufficient strength to safely etch a circuit board.  Some of the surviving Radio Shacks still around, most of which are franchises, may still carry boards and etchant.  "Instructibles" on Line also has articles on how to produce your own.  The above page shows the foil side of both the receiver and the 741 op amp filter.  I etched the board for the receiver, although I never did make the filter.  Later I built successive receivers and modified down converters on regular perfboard and sometimes even drilled masonite!  Just about any insulating surface works, even plexiglass! 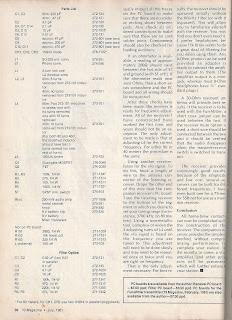 The author chose not to include an audio board or an audio circuit, though one can be easly made around an LM-386, which is what I recommend.  The suggested audio section for this project was Radio Shack's amplified speaker, which is what I also used, and what the photo in this article shows.  And to be sure, it was quite effective.  Making your own LM386 audio final does allow the builder to shape the audio, add bass, and any level of gain desired.  So for the builder of today, I'd say take advantage of the web and google the many simple audio circuits out there.  Later I will post one to this blog as well.

That's it.  Next project posted will be the "Fun-Mitter" from Febuary 1981's '73 magazine, which was actually the first in this series.  I posted the receiver first because I actually built it.  I never did make the transmitter, but we will give it a once-over as well, together.