A Pocket Caroler, and a Short History of the Chapbook. 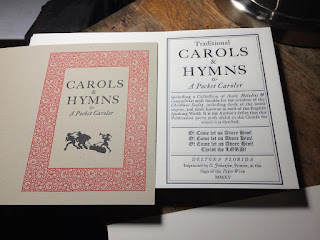 Production shot of "A Pocket Caroler"

A Short Introductory Video.
No, it's not professionally made.  But I like the German Carol in the background....

Introducing my first Chapbook, "A Pocket Caroler".  This is a new direction for the Paper Wren, which is now a "Private Press", having stepped away from the clatter, white noise and fad-chasing which has come to almost define  what is called "21st Century Letterpress".  Myself a print traditionalist who cares more for his ancient presses than whether a client gets a deep enough deboss, a Luddite at heart, I decided to turn the presses at the Paper Wren loose on what they were designed for.  The printing of letters.  Words.  Pages.  This is what identified Letterpress for over 500 years.  Why should it not do so now?

A little about the Chapbook:

historical
plural noun: chapbooks
Firstly, it is indeed called a "Chapbook", which by tradition is a smallish publication, hard or paper bound, usually no more than 48 or so face pages, single signature, folded in the middle and either pamphlet bound or saddle stitched. Often, little more than a pamphlet.  Early in their evolution, the Chapbook was the venue for inexpensive childrens books and for short story/ poetry publications.  They were very inexpensive, relatively, to print and because of their limited production, more attention could be paid to the design aspects of these publications, something attractive to aspiring authors who had not the funding for large scale book publication.
Chapbooks were known for their simple, almost primitive styling, especially their early woodcut illustrations, often tipped into the text block after the text printing and binding.  They were locally made, which meant that the printer and type compositor pretty much worked closely with the author and their own resources and skill levels which reveal themselves in these early Chapbooks. 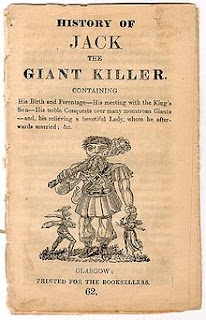 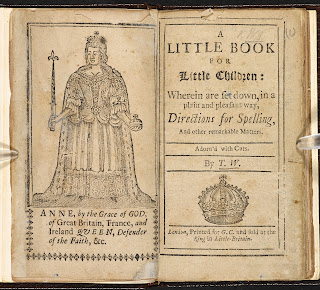 An example of a very late 17th century childrens' Chapbook, during the era of Queen Anne of Great Britain.
. 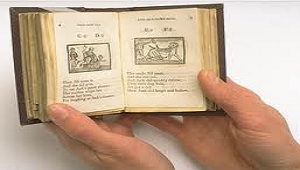 A classic hard bound, block illustrated childrens' book in chapbook format.  Some of these early chapbooks were actually multiple octavo signature books!  But still, cheap and small.
.
As printing machines and techniques improved with the mid 19th century industrial revolution, the quality of the Chapbook improved. Novels began to appear in Chapbook format, as did sonnets and Shakespeare selections.  Unknown authors and poets could introduce themselves to the public via the Chapbook, which by the 1870s could be a surprisingly impressive publication. 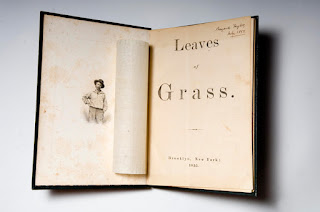 An example of a relatively not-so-simple hardbound Chapbook classic of 1855, Leaves of Grass, complete with Carte d'Vista photo.  In 1855, this was an actual photo that was tipped into the book.  Technology was advancing. 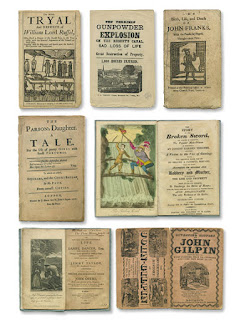 An assortment of late 18th and early to mid 19th century chapbooks which became less children-centric and began to appeal to adults in the form of short novels and news documentaries.

.
The Private Press movement of the latter 1800s and early 1900s produced a proliferation of Chapbook publications in a bewildering assortment of sizes, and topics, all of which were printed mostly for the enjoyment of the author and the printer.  And.... often.... the public.  At the height of the Private Press movement, many of these publications began to acquire an audience, and became collectible.  One example are the Roycrofters' "Little Leather Library" series which were originally printed out of East Aurora New York by subscription only, later advertizing in National Geographic and other national magazines. 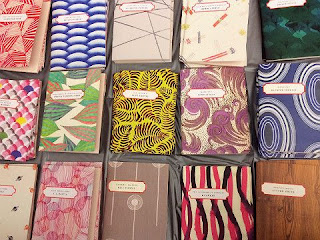 Private press chapbooks of the late 19th, and early to mid 20th centuries printed by private, and often basement or underground presses.

.
While the Chapbook faded from popular use in the United States, in Europe they continued popularity.  Often, larger books used Chapbooks to tease their release by the publication of the first chapter of the larger book.  England and Germany continued with small private press printings of Chapbooks, as well as corporate involvement  from major Verlags and Buchandlungen, as an example, in Germany. 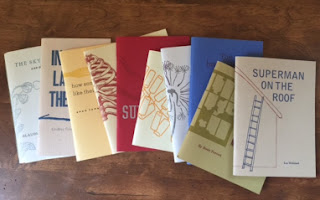 .
Chapbook publication is just starting to become popular again in the United States, with some colleges offering Chapbook Awards for graduate literature students, and as well private poetry organizations  have started to seek out these sorts of publications for their members to have their work in print.  Some are already achieving collectable status, with surprising auction prices. 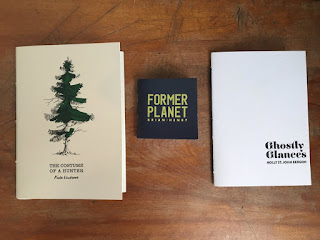 An example of some of the more modern Chapbooks.  Note the five station pamphlet stitching!  These books are still hand bound.

.
As for my most recent attempt at wandering into the world of the Chapbook, I have indeed enjoyed every step of the process.  In a later installment... and as I can get the photos off my Iphone, I'll share the various stages of the printing of my own chapbook, "A Pocket Caroler".  Until then, enjoy the video.

If you wish to reach me about the upcoming availability of "A Pocket Caroler" and would like one for yourself, please e-mail me at paperwrenpress@gmail.com

For further reading on the subject of chapbooks, I've provided some links you may wish to peruse.

I would like to call special attention to the above link to St. Brigid Press.  I am a friend of the owner, Emily Hancock, who's press operation is located in the mountains of Virginia.  Emily is using a press that I restored a few years back, a 1909 Pearl Old Series Model 3, a very sweet treadle press with a great publishing legacy.  Peruse her site, check out the extraordinary high level of fine printing she executes.  She has been an inspiration to me personally, as I model my own shop more or less, in a much smaller scale, after St. Brigid.

Thanks again, Emily.  You get a Caroler !!