Resurrecting the Drake TR-3 and AC-3 Transceiver and Power Supply. 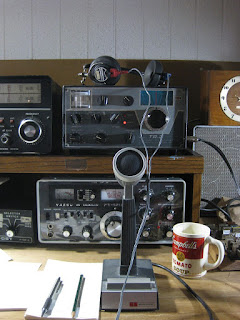 When I was gifted by an elderly ham friend with a few parcels from his ham shack, the focus was on a Kenwood TS-420, a Dentron MS3000A and two Ham-M rotors with control boxes.  Almost incidentally tossed in was a rather neglected, somewhat dirty  Drake TR-3, and not far in the storage area where it was kept (incidentally  NOT where the other items were kept!) I found it's equally dirty power supply, the AC-3.

The storage area was the corner of a garage attached to a mobile home.  You from Florida might have an accurate picture what I mean by that.  No climate control, constant 90-100 degree heat 10 months out of the year, no climate control, and lots of crawly things.  Well . . . it wasn't quite that bad, no crawly things, but the lack of climate control was evident.  This poor Drake probably had not seen air conditioning since the 1980s!

Early Drake radios used a copper clad chassis which looks awesome when new.  Get some age and the copper stains become very evident.  Oxidation is a no-brainer.  Fortunately the chassis are heavy enough to maintain their integrity over the years, in this case, fifty of those years.  I would say this radio was decommissioned and set out to pasture about twenty  to twenty five years ago.  It had been re-tubed sometime in the 1980s, from what I might tell.  The original finals and drivers - in fact ALL the original tubes - were boxed in the boxes of the tubes which replaced them.  You can tell an original Drake valve, or tube: Sylvania.

At some point I decided to attempt to resurrect the AC-3 and the TR-3.  I figured that while I more than likely will not "restore" it, I may be able to resurrect it, for use, perhaps, as a cw transmitter to pair off with my Drake 2B.  It was worth a shot, anyway. 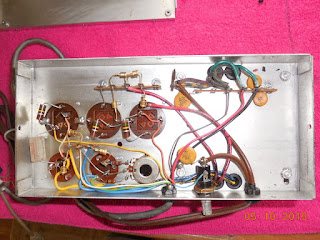 The first object of my attention would be the power supply.  It was an obvious disaster just looking at the electrolytics.  So the first thing I did was search and download any image I could find that might show what the below-deck wiring should at least look like.  Sure enough, Google Images turned up the perfect photo.

I had already determined that this was going to be a rebuild from parts that I either already have, or could easily procure.  There are, of course, rebuild kits for these power supplies, but the AC-3 kit is the most expensive, and requires a bit of body-work to mount.  The manufacture of these kits obviously favour the AC-4 supply, which is a direct bolt-on device with a price tag twenty dollars less!!   If I was going to have to take my tools out, then I'm gonna do it all the way, "Old School" style.  Besides, I had, actually, small hope that this project would actually be successful, but I had to try.

The transformer tested good as far as voltage went.  I expected more from the secondaries at first, but then I recalled that this was an era of Sweep Tubes and voltage doubler supplies.  So, I located a schematic to verify.  (Read: I pulled my TR-4 / AC-4 manual and schematic that I already had. There are essentially no electrical differences between the AC-3 and the AC-4) 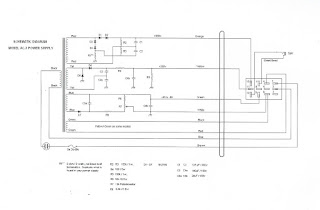 Looking over the supply schematic, I noted that the electrolytic filter caps did not show polarity.  This wasn't a problem . . . . until I looked over the negative bias supply.  Then it dawned upon me that I only read about bias supplies, I never actually handled one with my own hands.  I might guess the filter caps have grounded positive terms, but was I missing something?   After a lot of verification I found that indeed they do mount in reverse.   And, if you look closely at the schematic symbol, the caps DO show polarity.  The symbol has two parallel lines, of course, however one is straight, the other is slightly curved.  This is consistent with the traditional printed condenser/ capacitor schematics, historically.  The curved line represents the ground side, in the case of polarized caps.  And indeed, the bias supply caps have the curved line on the top, consistent with the negative bus.  All this may seem logical and inanely elementary.  But I get like that sometimes.  Ever look at a simple word long enough and it starts looking weird?   Like it isn't spellt correctly?  Yeah, as a letterpress printer, that happens to me, too.

Ok, so I literally gut the whole chassis, remove the transformer, caps, strip it down entirely.  Now, what to do about the caps?  There are five gaping holes in the chassis.  I would like to keep a vestige of the original "look", I already knew this project was not going to be a restoration.  It was going to be a resurrection. 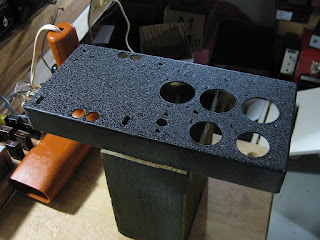 Early in the game, back when I was a Novice, I was in love with gear from the 1920s and 1930s.  And back in the 1970s, there was a lot of it around.  A lot could be had cheaply, too.  Back in the 70s, the big focus was on restoring Victrolas and Gramaphones, not vintage Radios.  I was a lone wolf, or so it seemed. I learnt then that everything looks better in Black Wrinkle Finish!  Yes.  And I still feel that way.  It handles heat better than any other paint (in my humble opinion) and it covers a multiple of ills.  And it looks right crack!  (very nice.  Professional.  Sanitary.  Choose your American adjective.).

When I first painted this chassis, which had to be done in stages  (one side at a time, and the top separately), the first thoughts of ultimate success - in some manner - began to germinate in my small mind.  Wrinkle finish paint does this, Brethren!!  It inspires success!

You can get Wrinkle Finish at many Automotive supply stores.  I got mine at Auto Zone.  It's not the cheapest can of paint on the block.  Here is my technique:

First, understand that this paint was not intended to be sprayed on primer.  It's a bare metal application.  We used this on exhaust headers back when I did motorcycles, it goes directly on valve covers, and parts that get very, very hot.  You spray it directly on the metal cold, then heat it with a heat gun.  This means that you have to do small areas at a time.  For radio cabinets and chassis, I spray one side well.  Don't spray too thick, but don't spray too thinly.  A generous coating is fine.  I do not mask off the side I am not spraying : overspray isn't a problem.

I take the piece inside the shop and begin to use forced hot air on the spray painted side.  I move the heat gun back and forth, for usually about fifteen minutes, and after a while one corner will begin to wrinkle,  You can see it in the reflected light.  Then that wrinkle will spread across the painted surface to the other side.  It's fun, actually, to watch this phenomena.   You can control areas that have less wrinkle that other areas by focusing the heat on that side.  It takes a bit to develop the touch, but after a while a feel is developed.  After you achieve the level of wrinkle that suites, the process is repeated for another side.  Again, over-spray isn't really a problem because the wrinkle dynamic hides any overlap.  After a while I found that Wrinkle finish painting can be a very intuitive and individual process.  Almost an expression, an art.  Wow.  Making an artistic statement with your transmitter.  Imagine.

In the meantime, I tested the voltages present on the transformer windings.  When I took the AC-3 apart, I tagged all the wires, but good to double check, anyway.  The HV and the LV windings checked at 280 and 125vac respectively.  Both of these windings see voltage doublers with an output of 650 and 250vdc.  The bias supply checked in at 65vac and the filament winding at 10vac.

The caps were all bad and the diodes were questionable.  I replaced them all with 1000v piv silicone diodes, my standard go-to power supply diodes.  As for the caps, I purchased several 100uF/ 450v filter caps.  These were used either singly or in series (in the case of the HV line) with their original equalizing resistors across them.  Since I had these large holes in the chassis which originally facilitated the original wafer sockets which held the above deck filter caps, the decision was made to utilize these holes, as already mentioned. To accomplish this, I used a combination of cardboard tubing painted black, black plastic 35mm film canisters, wrinkle-finish painted pill vials and a hot glue gun.. 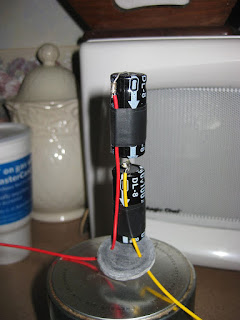 I began to rebuild the cap that would filter the 650vdc "Hi Voltage" line.  Using a 1.25" diameter cardboard tube, I cut a base from phenal to become the mounting platform for the cap's internal structure.  The photo above gives you a pretty good idea how it came together. 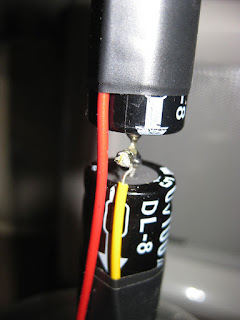 A close-up of the series junction.  The junction between the caps is tapped as a voltage doubler. Black electricians tape cover the two 1-watt resistors. 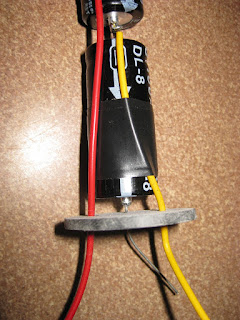 The wires are all fed through the bottom disk which I just sawed and cut to fit the bottom of the cardboard tube. 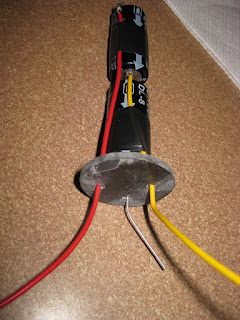 Another veiw of the base showing how the wiring is arranged at the bottom.  The red wire is the HV bus, the yellow is for the center tap.  The uninsulated bus is for grounding. 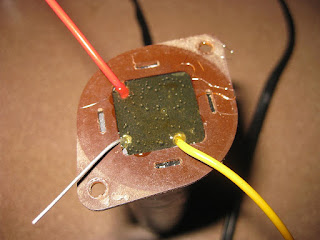 After the tube is slid over the caps, it is sealed to the original wafer that held the original filter cap, with Hot Glue. When the glue cools, the wires are held in position, and when this happens, the series soldered caps in the cardboard tube are braced and held firmly in place. 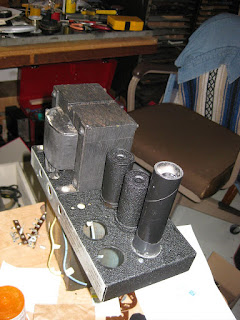 The larger of the three filter caps is the HV filter cap we just described above.  The smaller two are filters for the LV voltage doubler, only these are housing only one cap.  The covering for these smaller caps are 1.25" diameter pill vials. 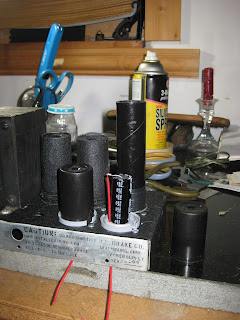 The bias supply needed filters too, so we used the remaining two holes on the chassis to mount yet another pair of filter caps.  These were covered by black plastic 35mm film canisters.  The mounting bases are the caps for these canisters.

Note that I did not paint the rear apron of the chassis?  That was so to preserve the original printing on the rear deck. 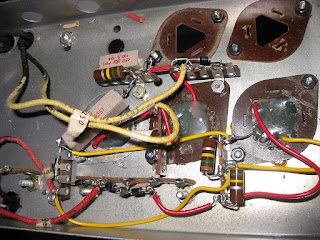 I opted for point - to - point hard-wiring, not only to preserve the original "look", but also because this resurrection was going to be accomplished using parts on hand or parts easy to procure.  As it was, I used the original equalizing resistors, I merely supplied all the caps and new terminal strips and diodes. 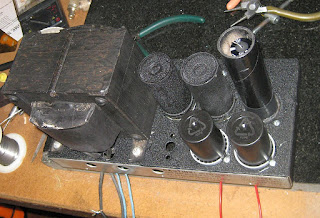 The re-built caps now mounted, the transformer in place, the wiring under-deck being complete, I now add the rest of the hardware, the bias adjusting pot, and the cabling.  Once finished, another round of voltage checking and smoke testing was undertaken to make sure that the Drake TR-3 had every good chance of having proper operating voltages applied. 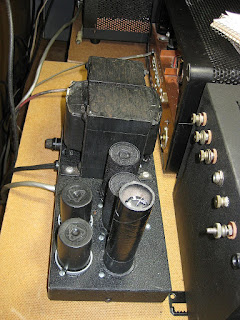 . . . and here she is, the completed AC-3 in her new make-over, dressed in wrinkle finish black, sporting new caps, new diodes, fuse and fuse holder, original bias pot, transformer and cables. Total cost to me was under thirty dollars.  Thirty "year 2015" dollars.  Not too bad, I might add.  A decent "junque box", a few runs to the military surplus store (Skycraft, Orlando FL) and a sprinkling of creativity, and she's ready to roll with all voltages checking to manual specification.

Stay tuned for the next installment: Resurrecting the TR-3!