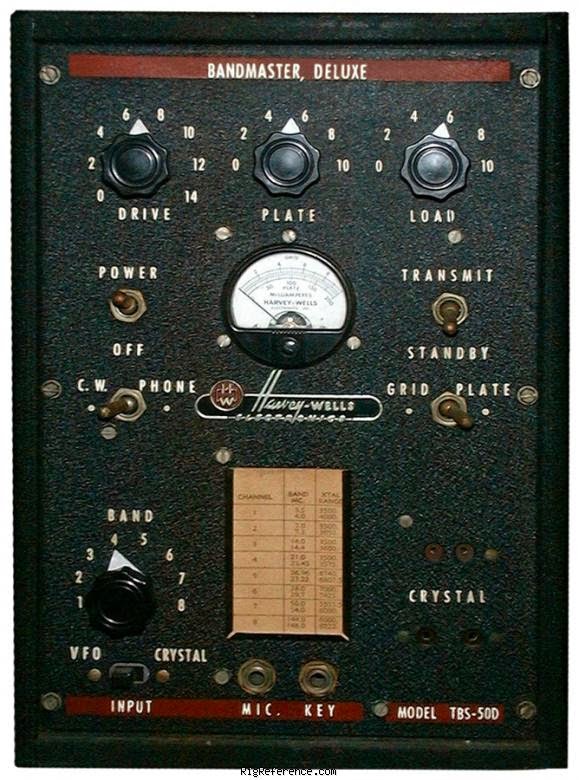 Before I go too far, I thought first that I would show the dear Reader just what a "Bandmaster" is.  This was an Amateur Radio Short Wave transmitter, which saw production in the mid to late 1950s.  It was built by the then well known Harvey Wells people.  The Band Master in it's essence is a radio telegraph and radio telephone transmitter, the frequency of which is controlled by crystals.  It used, if I recall, a single 807 power tetrode final, capable of about 75 watts input "CW", or "continuous wave", which is sent by hand key.  In other words, International Morse Code.  It was probably realistically capable of about 40 watts output using A3 controlled carrier radio telephony (an AM telephone transmitter).  It was designed for use on the Amateur Radio Service short wave frequencies, between 3.5 mHz, and on up to approximately 29mHz, although I doubt seriously many folks worked these rigs much above the forty meter band.  Power drops considerably with these rigs much higher in frequency.

Many an excited Novice Class license holder used these transmitters, and a fair share of seasoned vets as well.  Many are still on the air today!  Mostly doing code work.  They required an external power supply, and some models came with a VFO, or Variable Frequency Oscillator, expanding the versatility of these black wrinkle-finished boxes.

Were they a "great" transmitter?  Well . . . I thought they were ok when I had one, but the exposed power connections on the back left much to be desired.  Ouch!  But, yes, they were fun.  Eventually we Novices  upgraded to that HT-32 Hallicrafter or that Drake TR3 or that National, (bigger transmitters) and the rest is history.

But oh, these rigs were Iconic.  No other radio looked like the Bandmaster!  They harkened back to the 1930s and 40s with that vertical posture, the black wrinkle finish, and oh, the knobs, knobs, knobs...!  What heart does not melt in the bosom of the wistful Geek just looking at this baby.

Yes, any Op (operator) who's been around the block for a while will know the Harvey Wells TBS-50 Bandmaster at an instant.

I went to this year's Orlando Hamcation February last, and came home with what I hoped was a working VTVM (vacuum tube volt meter), which I planned to use to tune up my HQ-170 receiver with.  But when I finally had the time to look it over and fire it up, I discovered that the meter was compromised, requiring a replacement, which is nigh unto impossible.  These VTVMs ceased production sometime in the 1970s, and my particular specimen dated to the mid 1960s.  What to do?

Why . . . what any other red blooded Ham does with a piece of junk!  Build a transmitter inside it!

And that's just what I did.

Now, rather than go through the blow by blow detail, sufficient to relate that I simply duplicated the last MOPA which I have already described in detail in a prior installment, which used a modified Pierce 6AG7 xtal oscillator to drive a 6V6G in class C amplification mode.  The difference is that this one has Pi output tuning. But when I was done, this former VTVM really reminded my of none other than the Harvey Wells Bandmaster, only in miniature, and with a lot fewer knobs.  What cinched it was when I applied wrinkle finish black paint to the front panel and cabinet!  Oh, my goodness!  I was in love.

Here is a quick Show and Tell of my little "Mini Bandmaster".  This was one of the rigs I used on Novice Rig Round-Up in February. 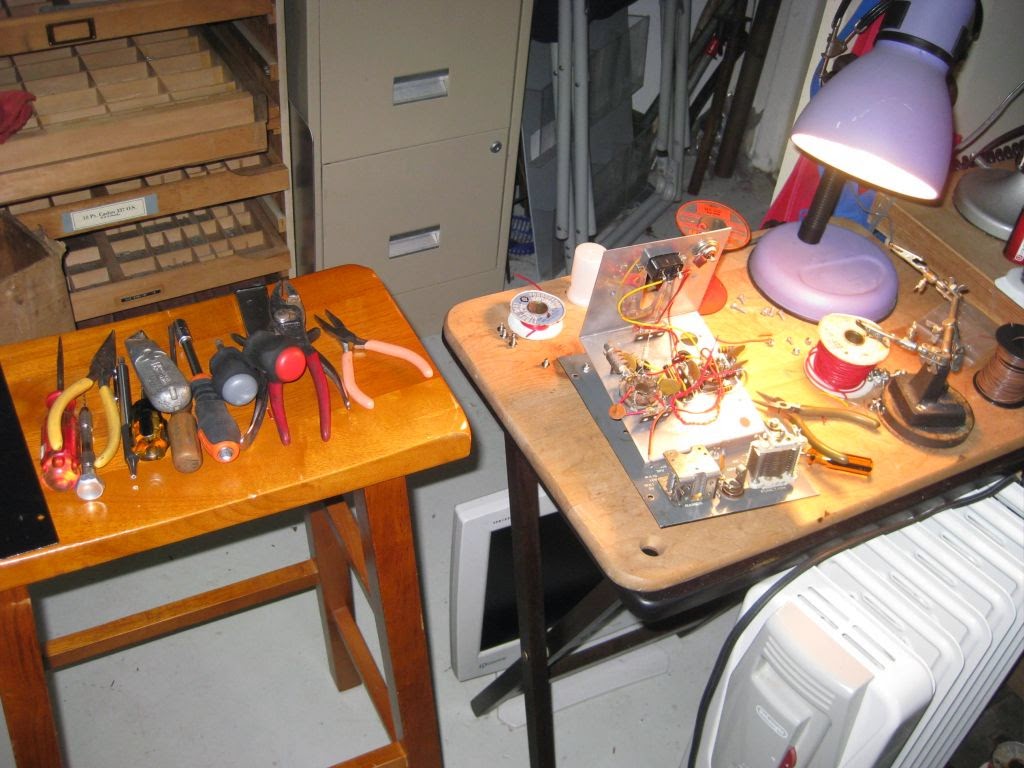 Building a radio is never a tidy affair with me.  Much less so since my radio shack happens also to be my  Letterpress Shop!  I try to keep my tools over there.... and my wire over here.... my solder gun.... ooops.....over there.  Somewhere in the middle of all this is the object of my attention. 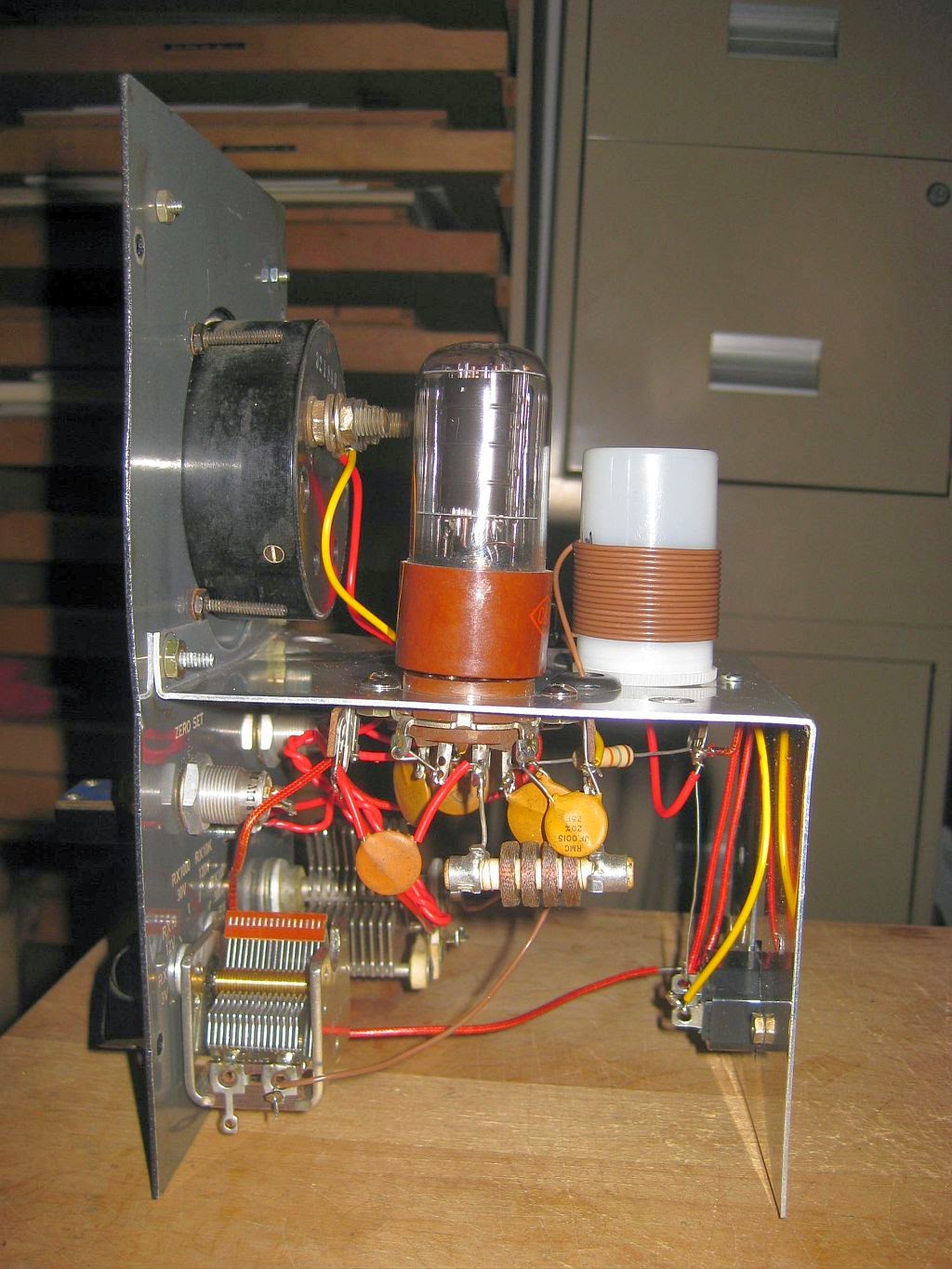 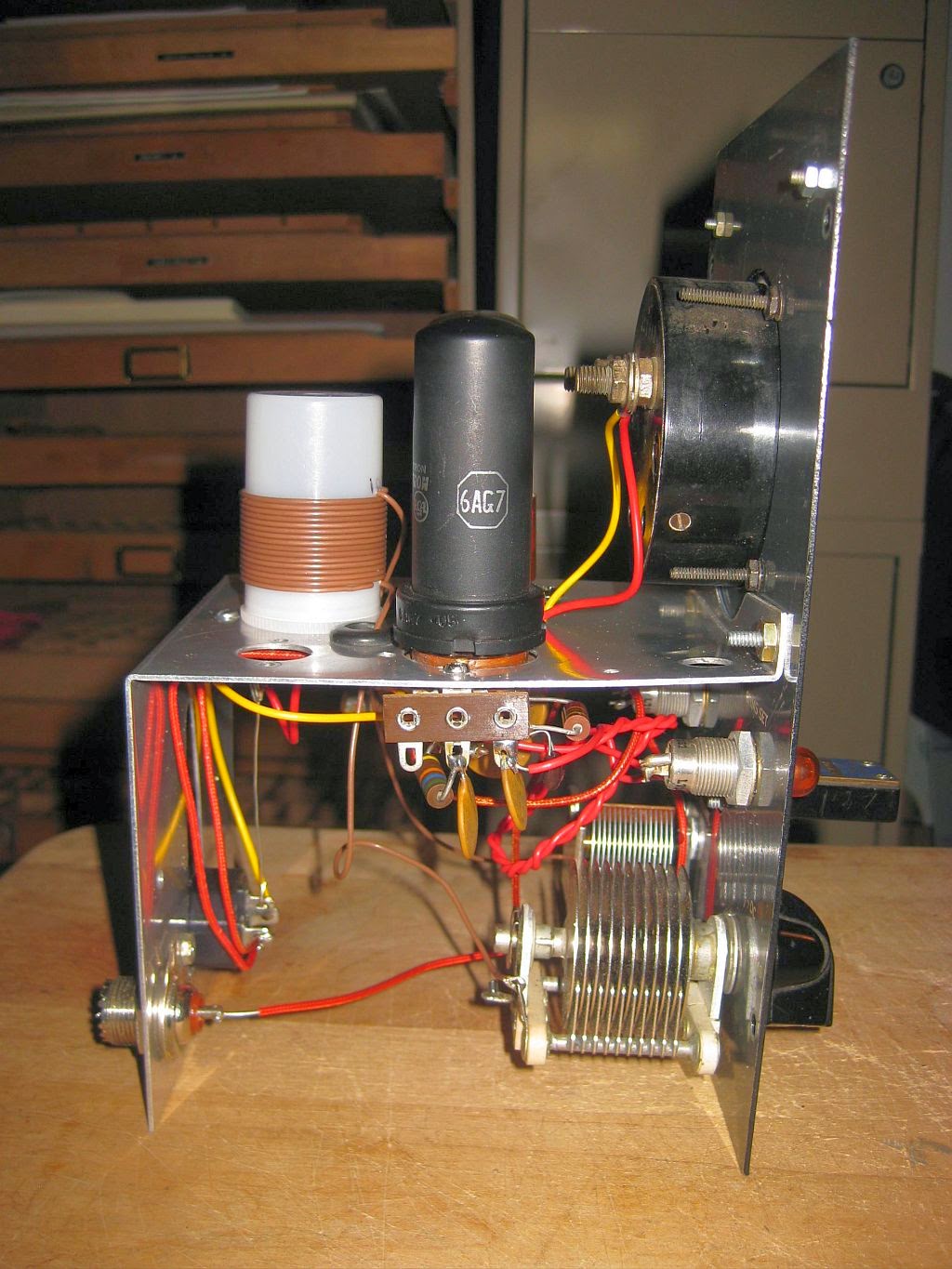 Here are a couple side shots during mid construction.  I just happened to purchase a 0-150mA meter at the Orlando Hamcation, which fit the spot vacated by the damaged meter perfectly.  You can see the Pi tuning variables which I purchased off eBay.  The tuning coil is hand wound around a plastic 35mm film canister, my go-to coil form for MOPAs (Master Oscillator Power Amplifier).  I had just enough room to re-punch the tube socket holes around the existing mini-tube holes.  Because I was able to get away with minimal punching, the chassis integrity remains intact.  That choke you see in the upper photo under-deck is the 2.5 mH RFC (radio frequency choke: helps to keep high frequency signals off the high voltage DC power line powering the tubes.) 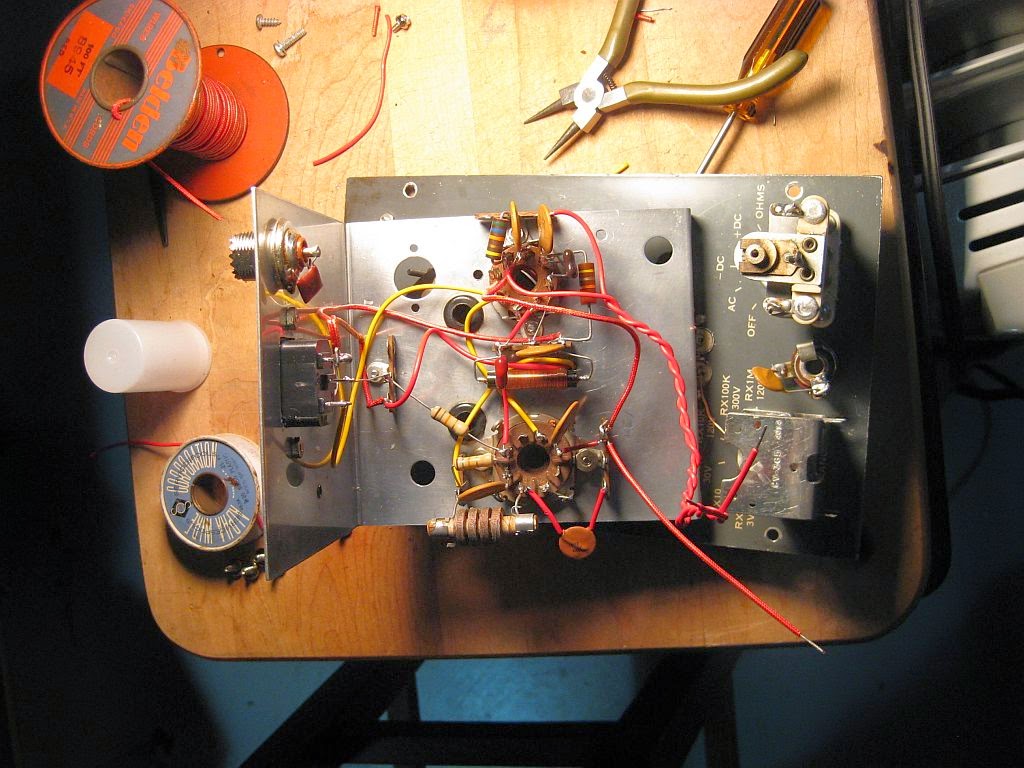 The chassis is a simple "L" shaped piece of aluminium which bolts at one side to the front panel, and on the other to the cabinet.  As such, it is held quite rigidly in place.  You can just see the original VTVM front panel beneath the metal sub-chassis here in this mid-wiring photo. 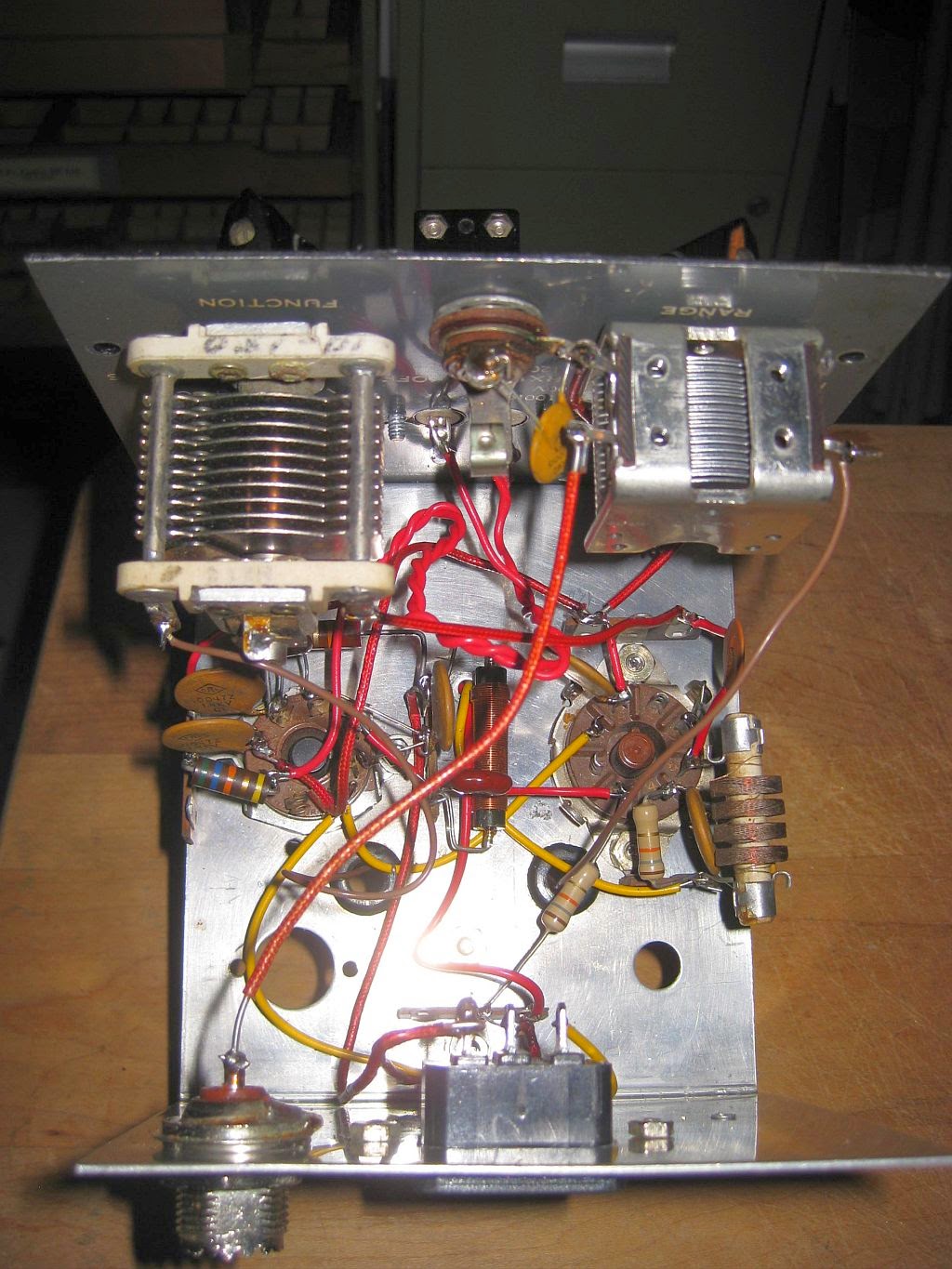 This is a shot below deck.  The variable on the upper left is a 150pF tuning cap, for tuning the output to resonance, and the one on the upper right is a 365 broadcast tuning cap, which tunes the transmission line to the resonant circuit once tuned.  My power receptacle came from a computer power supply.  The wiring is, of course, point to point.  I used bare 22g tinned buss, sliding insulation over it after each piece is cut to length.  For tight spaces, for me, this works better than using pre, or factory-insulated wire. 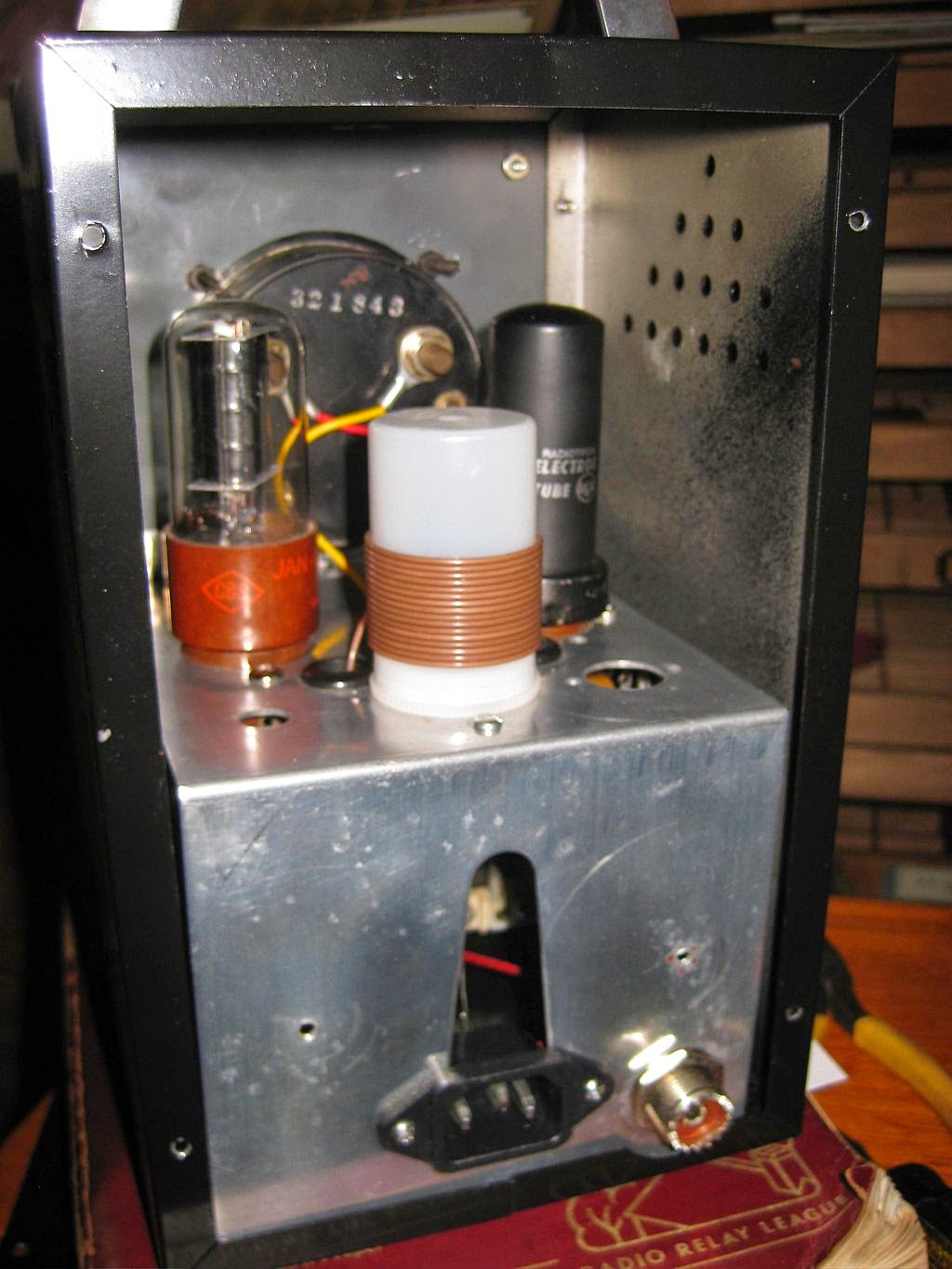 The rear view.  The rear apron had this convenient wedge cut out of it, so I took advantage of it.  That wedge originally provided a "tongue" of metal to hold a battery for the VTVM.  I cut that off, and utilized the space left by it. 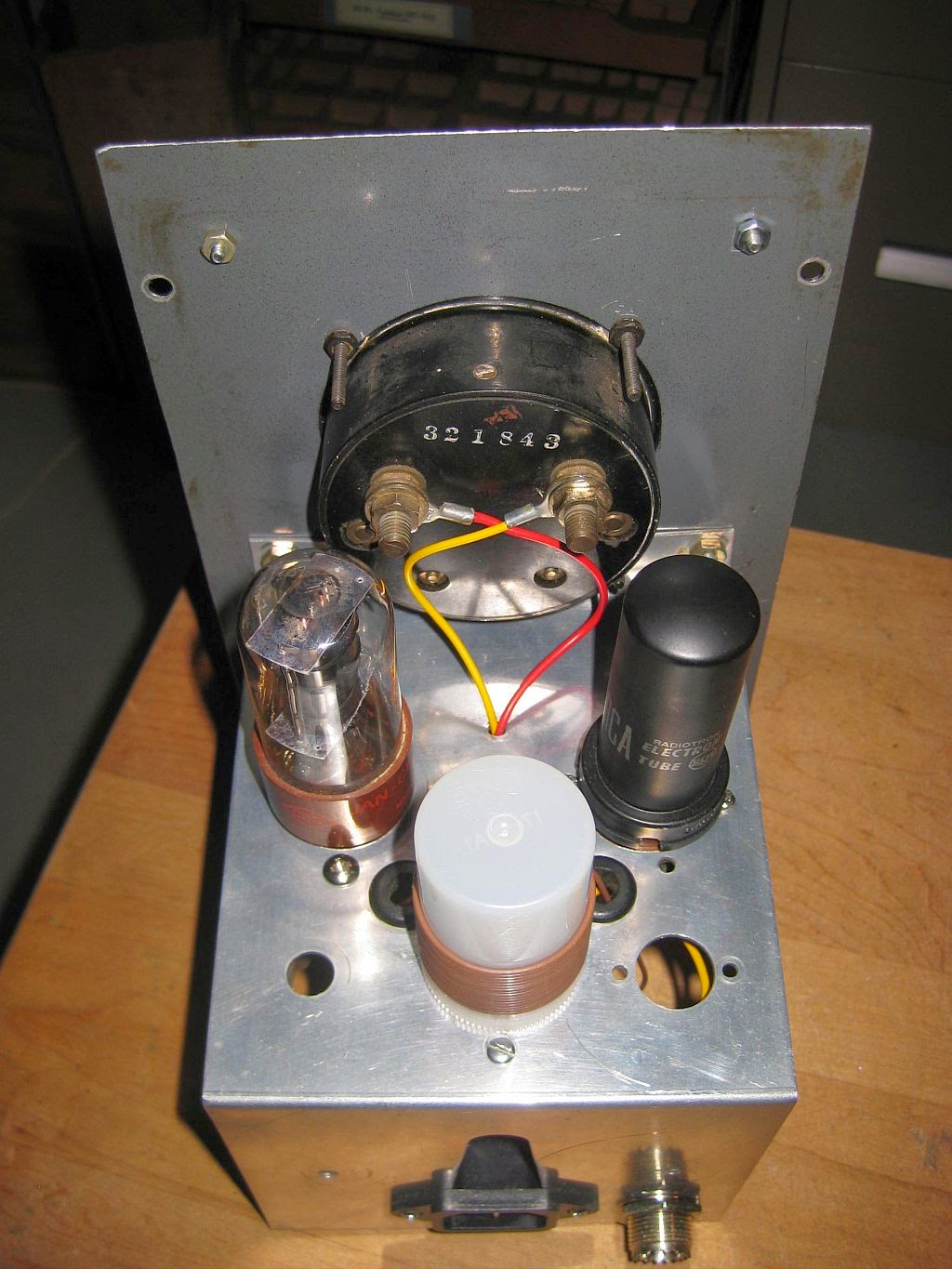 The top view.  Why are the wires to the mA meter criss-crossed?  Oh . . . because.  Heh, it wasn't until after I hooked it up the first time that I realized that I had the polarity crossed, so I flipped the wire around.  I just didn't re-bend them.  I kinda like it that way, don't you?  No?   Awww..... 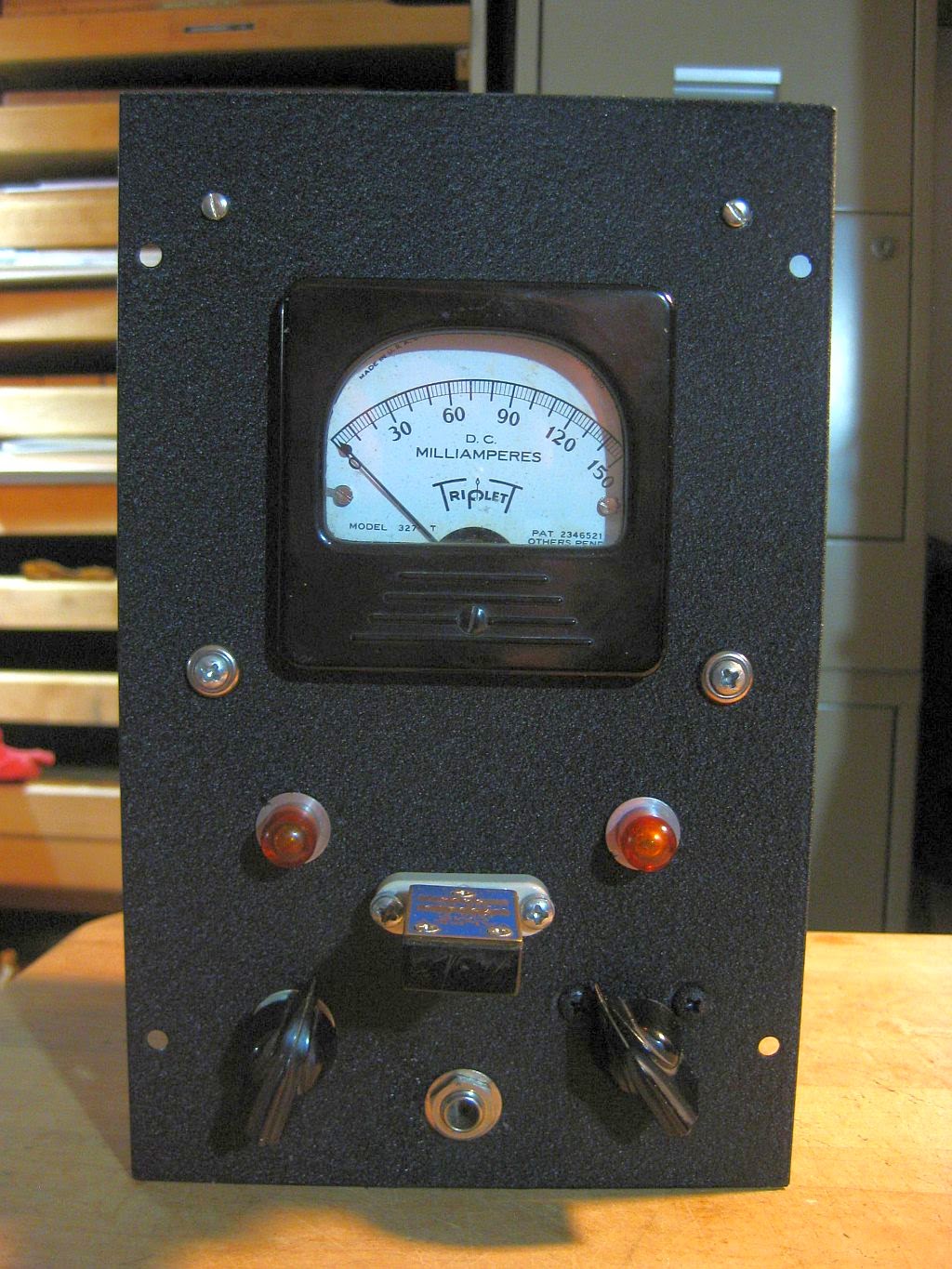 Ta-dah!!  There she is, xtal in place.  Code key plugs in front between the tuning knobs.  Lights show DC power (so I can tell the transmitter is on!) and RF output.  With my current power supply (described in an earlier post) I can just squeak 5 watts out of this little rig.  BUT....with the proper power supply it is capable of 25 watts output with the 6V6G, and 40 watts output with a suitable 6L6G.

Aint she pretty?  Yeah, I'm still pretty taken by her. 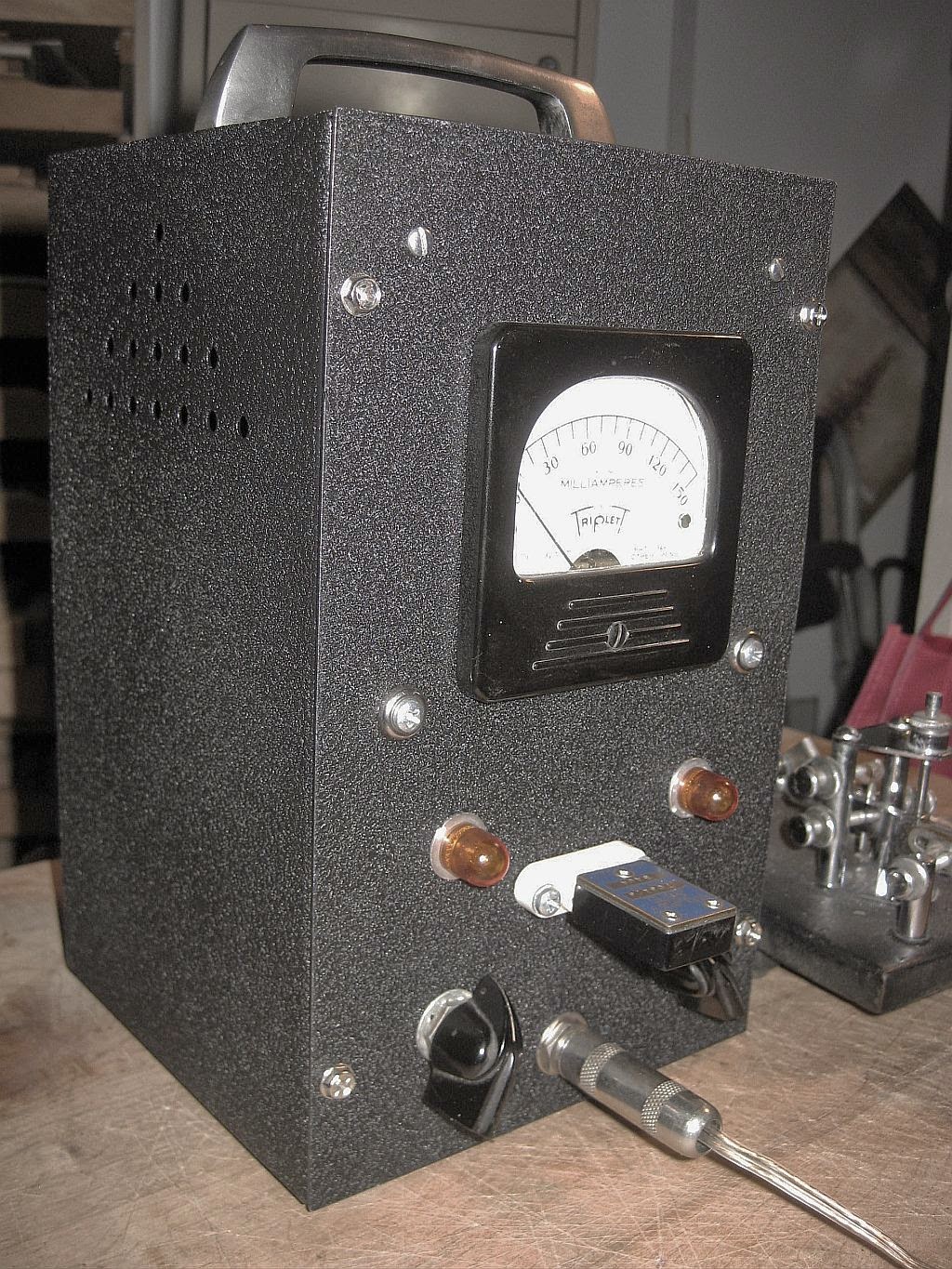 At first, I wasn't sure if I should put the original brushed aluminium VTVM handle back on the top.  I did, and I liked it so much I left it there.  Maybe somewhat less "Bandmaster-ish", but it sure does lend to that 1930s "portable" look! 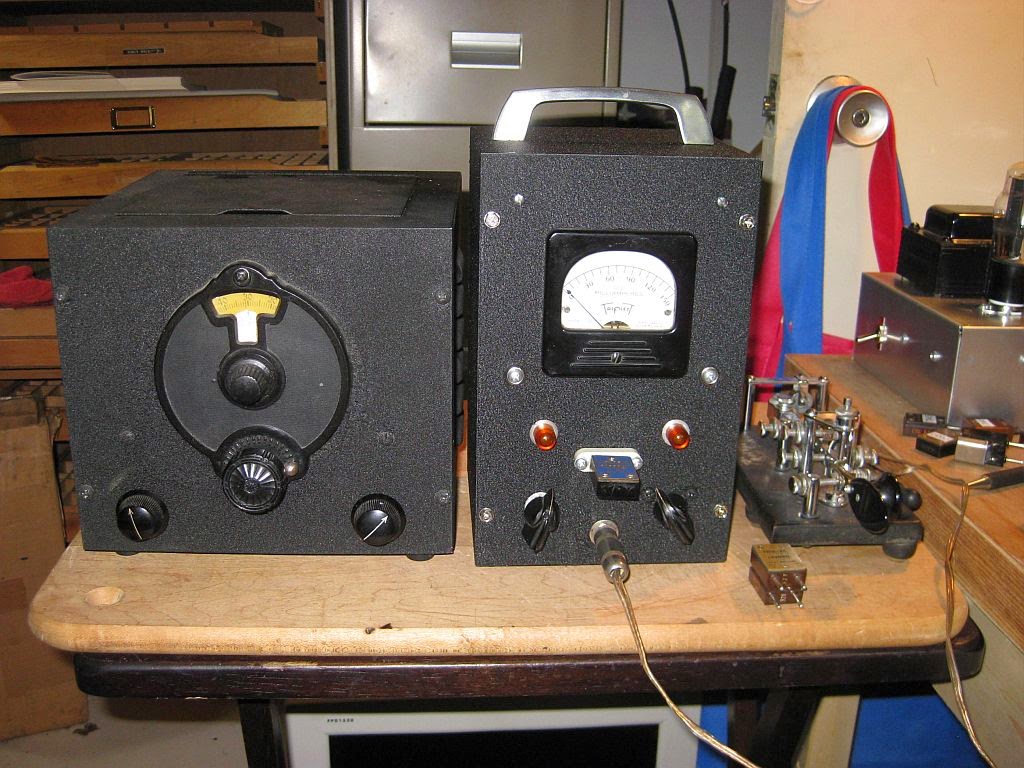 For NRR, I paired her with my Regenerodyne receiver, which I converted down to forty meters.  They are quite fascinated with each other, I can tell you.  Oh, and not to be left out, the J-36 keyer, which I also used, along with my RAF 8-amp straight key. 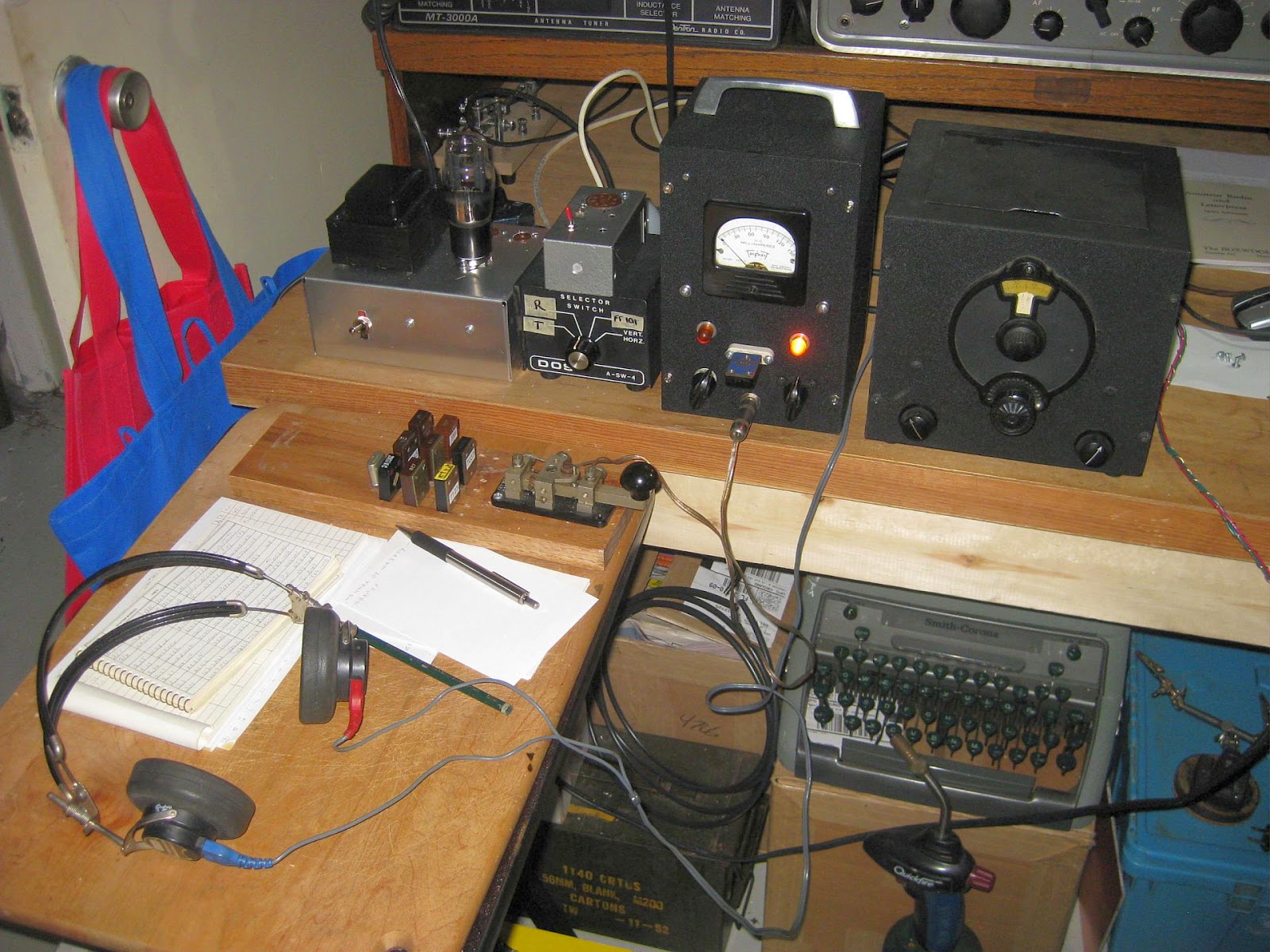 Here is the actual operating position for NRR.  Left to right: Power supply, antenna switch with my little spotting oscillator atop, the "Mini Band Master" (see the light?  I love lights.) and finally the Regenerodyne, which is a regenerative based single conversion superhet of my own design.  The phones (head sets)?  U.S. military, c. 1952.  low impedance. The key shown is the 8-amp'er. 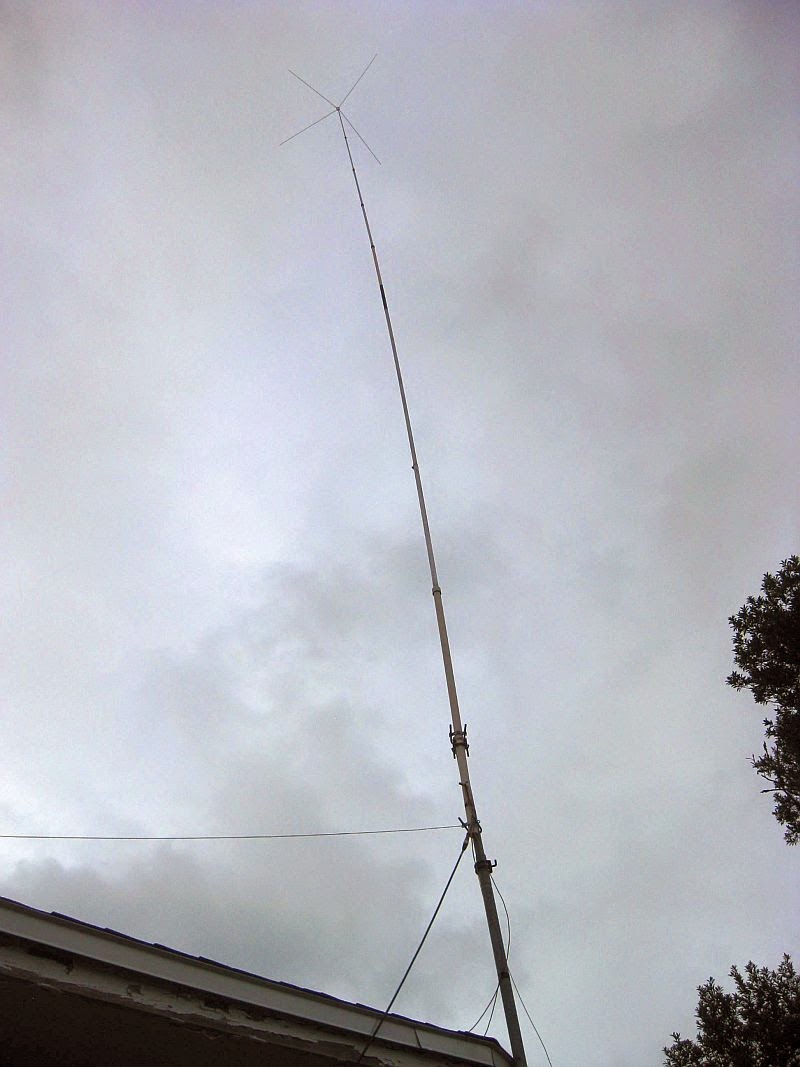 One last shot:  my 33 foot vertical on my roof.  All home made from tubing I had laying around the back yard.  That little five watt transmitter made it across the Mississippi and into Missouri and New Mexico coupled to this antenna.  Also, I worked up into New England!  Keep in mind, five watts, during an event, with solar activity beating the snot out of forty meters.  Not too shabby, methinks.

Well, that's all for now!  Stay tuned for our next installment where some how, some way, in some universe, at least at WD4NKA, Wireless meets . . . eventually . . . Letterpress!! 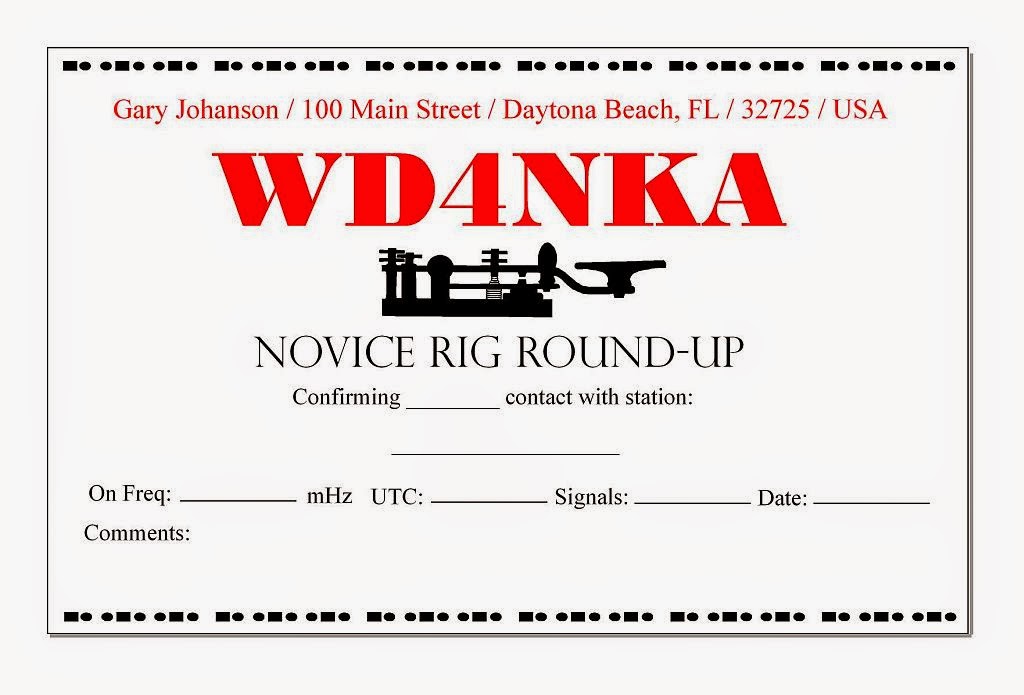