A "Plumber's Delight": The Classic 10m. Half Wave Vertical.

The idea was to try out my newly acquired Kenwood TS-430, but alas! My Amateur Radio Station an workshop of some 35 years was sold in 2007 to finance and make way for my Letterpress Studio and Shop (Paper Wren Press) - which means I had nothing in the way of an antenna.  I didn't just want to string up a random wire, I wanted something that was actually designed to get a signal out over the Ether.  Well . . .

. . .as it turned out, a few months ago, while recuperating from major surgery, I found myself whiling away the time doing a bit of qrp work from my last remaining transceiver, my 10m HTX-10.  I homebrewed an antenna that follows the ham-made moniker "Plumber's Delight", which for a guy who was still attached to a portable I.V. unit and maybe had about a quarter of his natural strength and wit about him, is a testimony to it's ease of construction and assembly.  Thus, I offer for your perusal my own version of the "Plumber's Delight: a Portable Ten Meter Half Wave Vertical"

This antenna uses two stainless CB aerials, 102" in length, and a mounting bracket that permits them to be mounted end to end.  Mine was obtained at the Orlando HamCation, along with about 25 feet of coax.  My bracket also has the nicety of having an SO-259 female attached for ease of feedpoint connectiong.  I am not using a balun for this, but I am feeding this antenna through an AT-120 tuner. 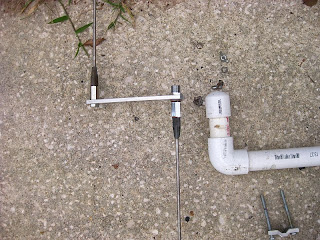 This is that bracket, showing the SO-239 female.  The antenna itself is basically this piece, the rest, involving schedule forty PVC from the hardware store, is simply a method of holding the vertical dipole up above the ground.  Here you can see the top, which is an 'L' connector, a short length of pipe and an end cap, all of which is mounted atop an eight foot length of PVC. 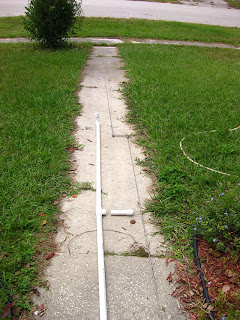 Looking a bit further away, you can see that the mast is two sections of pipe with a "T" connector holding the top and bottom pipes together.  The 'T' also hold that short piece of pipe with and end-cap.  This serves as a bottom element stabilizer. 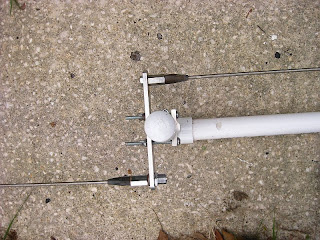 This is a view of the mounted antenna bracket.  You may have already noticed that this antenna can be mounted either vertically, utilizing the bottom bracket stabilizer 'arm', or horizontally.  I drilled a hole through the 'L' connection with the mounting PVC section inserted, dropping a screw-eye through the hole, screwing it in tight to keep the weight of the antenna hardware from rotating the mount,  I could have simply glued the PVC into place, but it's easier to rotate the antenna and the mount to change polarity, than to unbolt the antenna and rotate it ninety degrees. 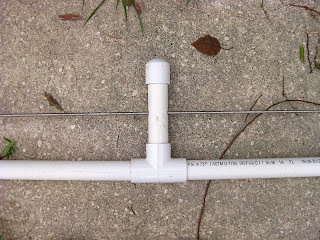 Vertical orientation requires something to keep that bottom element from flopping around, and I must say, these stainless steel "whips" are "whippy".  They are resilient, yes, but great Scott, these things can really pendulum themselves, which can serve to loosen fittings.  Hence the L-bracket stabilizer.  It may not be absolutely necessary, but I recommend it's use. 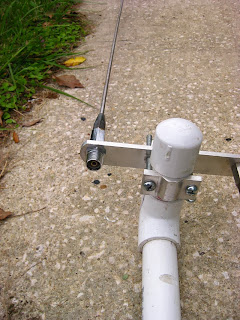 Another close-up of the antenna feed point.  This bracket and the coax cost me about twenty bucks at the Orlando Hamcation, but you can make one of these if you have a good sized drill and some parts from Radio Shack, which still carries - I think - the SO-239 connector, screw, and mounting base that accepts these whips. 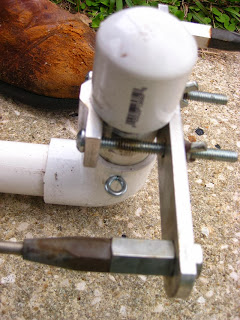 You can see the screw-eye that I used to hold the PVC mounting pipe in position.  Why a screw-eye?  Sometimes it might be handy to throw a stabilizing line up to the top to give added support to the antenna on a windy day.  Also, it might serve as a handy center mount for a wire dipole! 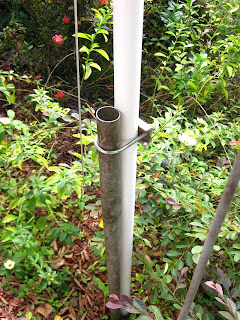 The antenna is light enough to be entirely supported by a five foot aluminium pipe, hammered into the ground.  I use only one U-bracket to hold this antenna in place, the bottom of the antenna mast is  resting on the ground. 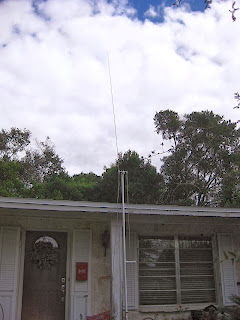 Owing to the short length of RG-58u coax, I had to mount the antenna near the front door.  Here is what the antenna looks like when mounted. 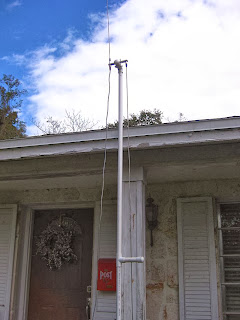 Here is a closer shot.  The overall length of the antenna itself is 16'5", and actually does a pretty respectable job on Two Meters as well!  I had just enough coax to run into the house. 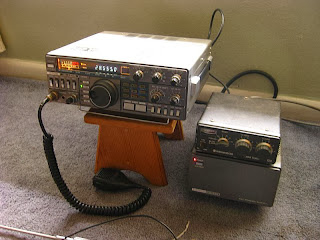 Here's the new rig: a Kenwood TS-430s, Power Supply and AT-120.  It is running somewhere around 50w on Ten Meters, although that may not be precise.  This is a one hundred watt HF rig, but owing to it's age and the frequency, I am willing to fudge in the absence of a watt meter and guess somewhere around 50 watts pep on ten meters. 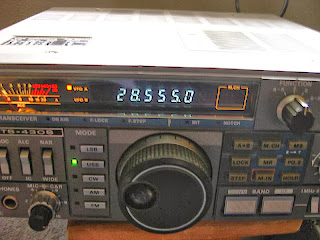 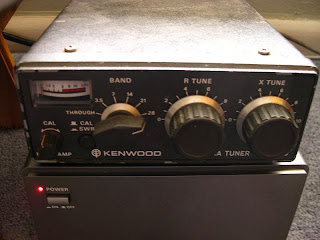 A flat SWR was achieved and maintained from 28.300, through 28.900.  Not a bad spread, really!  Especially when considering that the antenna is actually resonant in the 26-27 mHz range.  What was really amazing was that my two meter rig actually liked this antenna!  I have not done the math, so I don't know how this antenna behaves on 146 mHz electrically, but I have used the 102" whip on my car before to do some two meter simplex dx work.  I think it works out to about three half-waves, with a low impedance node at the feed end.

This is a little three-minute video that I made of the contact with Bill up in Nova Scotia.  Not exciting, but it was nice to document a first contact for me.  First contact using my new/old TS-430s.  Hoping to find a nice MC-50 mic for it one day, and some good head-sets for cw.

That's about it for this installment.  I know it's been quite a while, I have had to focus on the Letterpress end of things.  My hope is to have some time to get back into Amateur Radio, even if for a little bit each week.  The idea of this blog is to merge both methods of private communications, Ham Radio and Private Press, together, because I am convinced there are common threads between them that can bind.  It has not escaped my notice how many Hams are also Letterpress Printers, and how many Letterpress ops are....hams!  There is a reason for that!